Lima, Peru - City Tour & How To Stay Safe In The Capital 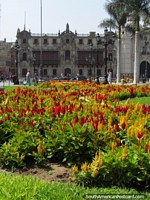 Arzobispal Palace behind a bed of colorful flowers in central Lima. 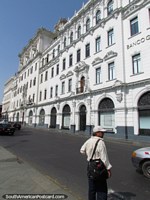 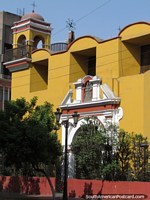 In 2014 I spent 2 days in Lima and had a great time exploring the city without any problems although I was warned a few times to be careful with my camera and of course after my 2009 experience I was very careful with taxis. I arrived first thing in the morning on a flight from Bogota (Colombia) and walked to a hostel about 1km from the airport. There was no time for sleeping or wasting the day. I took a bus straight into the center of town to walk around and see for the first time a city I had passed through many times before.

Lima is a huge place with nearly 9 million people. It's not at all attractive to fly in and out of. You can't see a thing because of the smog, even the sun can't break through it. However, getting past that, there is a lot to see here and in 2 days I saw quite a lot. Lima is a city famous for food. I enjoyed the takeaway Chinese food available around the city. I loved walking many kms around parts of the city center seeing as much as I could.

The most central and obvious place to start is at the huge Plaza de Armas with its many colorful flowerbeds and historical buildings surrounding it. These buildings include the cathedral, Arzobispal Palace, Government Palace and the massive yellow Municipal Palace. Lima is another city like Quito (Ecuador) absolutely full with historic churches, the map I have of the area around and including the center has over 30. Some of them however are on the other side of the Rimac River which is only 1 block from the Plaza de Armas and this is not such a safe part of the city.

The river is where I actually went to next, to walk along the safe side where there are a few things to see in park Parque Rimac. I always enjoy the street art and wall murals I see while walking around, sometimes you need to look for it in some of the more offbeat streets. The markets by the river was where I came to next, from this point you get a pretty clear view of the big hill on the other side - Cerro San Cristobal. From here I walked back in the direction of the main plaza and continued in a south / west direction a further 6 blocks or so. It was an interesting 6 blocks, this is what I enjoy about really exploring a city like this, getting out from the Plaza de Armas!

I saw several churches, small plazas, another market area - I ended up way over at University Park (Parque Universitario), quite a nice part of town. I went next to Parque San Martin, again with lots of historic buildings to see along the way.

Lima certainly is huge and the traffic is congested. You cannot really see this place in just a few days. On this morning I started out in the area around the Park of the Exposition, lots of historical sights, some wall murals here and there and more statues and monuments than any person could count. I spent sometime around here before heading in the direction of Plaza Miquel Grau, a huge concrete slab with some gardens and historic buildings around and with a thousand bronze busts. The sun was beating down very hard, even I couldn't be bothered taking photos of them all.

I decided now I would get more amongst the real Lima and walked up a very pedestrian heavy market street in the direction of Cerro San Cristobal. I ended up quite far up this street at a park full of busts of doctors. It was here I was told I should put my camera away and take a bus back in the direction of the central plaza which I did as it was nearly days end and my back was killing me!

I Saw Over 22 Churches

From my calculations I saw over 22 churches around Lima just by walking around, without hunting them out, just from my exploration! Next time I come to Lima I will continue to get to know this place a little better and make more time for Miraflores and the food.

From Lima I flew 1hr 5mins to Arequipa and continued another 25mins on the same plane to Tacna where I crossed into Chile to begin a few weeks backpacking there.

Don't Get Into Any Taxi!

During 2009-2012 I had a few experiences in Lima, arriving/leaving by bus, arriving/leaving by plane and with the taxis. A friend from Peru told me "Lima is a dangerous place", another friend from Lima who lives in Cusco told me "Lima is a horrible place, full of horrible people". Lima is a big, polluted and dangerous place, which was my experience in 2009. When my friend from Peru was waving down taxi after taxi in 2009 he let about 10 go before he allowed me to get in because he didn't like the look of the drivers eyes. This is an important rule, don't get into any taxi!

Express Kidnapping & Robbed by a Taxi

The worst experience with a taxi in Lima was when a girlfriend and I arrived at Lima airport after a long flight from the other side of the world late on a Sunday night, about 11:30pm. We unfortunately got in a bad taxi, another man got in, our packs were in the back, we had agreed on a price if $10USD to take us to the bus terminal because we wanted to head south to Pisco. Basically they drove us out to the back streets of Lima near the river, where there were absolutely no cars or people around. While driving along they presented me with a 1200 soles ($400USD) bill, I couldn't believe my eyes. I demanded that they stop the taxi and turn the light on so that I could read it properly. I told them that this was a load of bull****, they then got very angry and started shouting, they told me that Lima currency is different than elsewhere in Peru and that 100 soles was equal to $1USD for which I didn't agree with! They then got a third guy supposedly from the taxi depot on the phone to tell me that the currency is different in Lima again. Basically they made me withdraw money at several ATM machines to the tune of 1200 soles, there was not much we could have done, we were sleep deprived and didn't know what they were capable of. After they had got what they wanted, they actually took us to the bus terminal after about 90 minutes of driving us around the back streets of Lima. So be very careful to get in proper registered taxis especially if you have your luggage or if it's late at night. If anyone else gets in the taxi, get straight out! Accept that being a tourist you will be charged a bit more. The yellow taxis immediatley outside the airport are safe options but more expensive. When I was again at Lima airport in June 2009 the security seemed to have tightened up a lot, with the police checking the ID's of taxis coming into the carpark and all people entering the building had to show their passports.

A local supermarket in Miraflores, Lima has a good range of cheeses and service food and salads to take away! #cheese #food #Lima #Peru https://t.co/jcPK7K0Sef pic.twitter.com/Nu3IcGhaUH


View all photos in the Lima Photoset

Hostal Victoria, Lima, Peru (December 2019 - 1 night) - The 2nd hostel I have stayed at which is located just over the road from the airport on the side street behind the Holiday Inn. Hostal Victoria is much better too. I paid $50 Soles ($15USD) for the best room with private bathroom, double bed, tv and wifi. The hostel is a pay by the hour kind-of-place, but it's a good option for a budget traveler and is just a 10min walk to and from Lima airport.

Urban House Hotel, Lima, Peru (November 2017 - 5 nights) - Located in Barranco near Miraflores but a much cheaper part of Lima! $55 Soles for a brand new private room with bathroom. A kitchen is available for use and there is a roof patio also. Urban House was in the process of being built so I imagine prices will increase. The staff are very nice, helpful and friendly. Urban House is located just 1 block from central Barranco. Recommended!

Cozy Wasi Hostel, Lima, Peru (November 2017 - 2 nights) - Large private room with shared bathroom for $50 Soles per night. Located in Barranco, the cheaper neighborhood near to Miraflores. There is a kitchen available to use and there is breakfast available for a price. There are many cheap eating options in the streets around Cozy Wasi, much cheaper than Miraflores. If you're looking for a better deal than you'll get in Miraflores, then Cozy Wasi in Barranco is the place. Recommended!

Lion Backpackers Bed and Breakfast, Lima, Peru (November 2017 - 3 nights) - Lion Backpackers located in Miraflores can be found close to the center, park and shops. $65 Soles got me a small private room sharing a bathroom with 1 other room. Breakfast is included, there is WI-FI and a TV room. The staff are friendly and helpful. If you want to be in central Miraflores then this is a good place. After staying here I looked for cheaper options in nearby Barranco.

Hotel Malibu, Lima, Peru (September 2016 - 1 night) - Located just outside Lima Airport on Av. Tomas Valle, 10mins walk from the airport terminal. Not flash but not a complete dive. A place to rest your head for a night instead of paying a taxi to take you somewhere else. $25 Soles for the night, that's only $7USD! A basic room with bathroom, tv and wifi. Very simple but very effective, just wake up the next day and walk back to the airport for your connecting flight, I like that, but this place wouldn't be for all. Recommended for hardcore budget travellers because of it's closeness to the airport.

Manhattan Inn, Lima, Peru (September 2015 - 1 night) - I stayed at Manhattan Inn because it is close to Lima Airport, 10mins. It's a nice hotel, I payed $79USD for a double room with bathroom, tv and wifi. The water is nice and hot. Breakfast is included but is simple, bread, eggs, coffee and juice. They should throw in a fruit salad also. The hotel has an airport pickup service costing $15USD each way. No complaints, not bad!

Amazonas Hostal, Lima, Peru (April 2014 - 2 nights) - This rent by the hour hotel/hostal was great for a couple of nights. Located not far from the airport like many other hotels of this type. My own room, cable tv, wifi, private bathroom. Better than staying in a dorm at another hostel. Not much noise as it was not the weekend. Not in the center of the city. I actually recommend it!

Pay Purix Backpackers Hostel, Lima, Peru (April 2014 - half a day) - Nothing wrong with this hostel, it has a big lounge, dining area, bar and kitchen downstairs. Upstairs are the dorms and an outside patio. I walked here from the airport as I knew where it was from studying a map earlier. After arriving here, trying to sleep and then deciding I didn't really feel like sleeping in a dorm I left and went somewhere else for a couple of nights.
Peru Travel Blog | Photos of Peru | Festivals in Peru | South America Videos 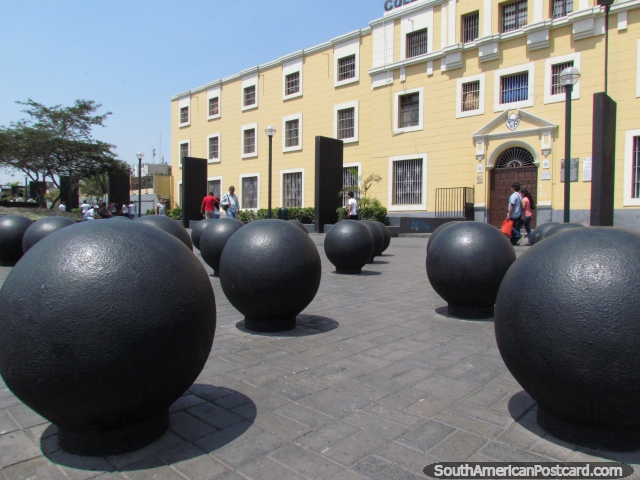