A boat goes from our ferry to the river banks to pick people up to bring back and continue the journey east to Nauta.

White horse outside wooden Amazon houses near the Huallaga River as we travel between Yurimaguas and Lagunas.

Sunset over the Maranon River, traveling by river is so amazing in the Amazon!

Small wooden house with thatched roof all alone in the Amazon jungle beside the river, south of Lagunas.
Map location: Yurimaguas to Iquitos, Peru

After a couple of weeks of traveling the Amazon by road, I finally came to the end of the road in Yurimaguas, the only option was to continue by river! This would be my 4th journey by river in the Amazon Rainforest, but my first in Peru. The other trips were in Brazil.

Origin of the Amazon River

Yurimaguas is a small city 2hrs north of Tarapoto and sits on the banks of the Huallaga River. The Huallaga River joins the bigger Marañon River further north and only when the Marañon River joins up with the Ucayali River that connects to Pucallpa does it become the famous Amazon River! The Amazon River actually begins about 80-100kms south of Iquitos and goes all the way to the Atlantic Coast east of Macapa - Brazil (the equator). Of the 4 river journeys in the Amazon that I have done, this trip was the most laidback, relaxing and uncrowded one of them all.

Firstly after arriving in Yurimaguas from Tarapoto and finding a cheap hotel to crash the night I headed by mototaxi down to the port to look for a ferry or cargo ship. It's a small port and a boat was easy to find. I was actually asked by a worker if I was going to Iquitos and was pointed towards a large cargo ferry called MF Gilmer IV. I went up to the 2nd deck and talked to the captain who was sitting at his desk outside. He said it would be $100 Soles ($30USD) for a hammock on the deck or $150 Soles ($45USD) for a cabin and I could also have a hammock at no extra cost. Since there was no great difference in price and because I had spent 9 nights on hammock decks on my Brazilian journeys, that's right you guessed it - I thought I would try a cabin this time! It wasn't a fancy cabin, just a top and bottom bunk, nothing more and there was no guarantee I would have it totally to myself unless I payed $300 Soles ($90USD) for both bunks. I wasn't overly bothered but was really hoping no one else would take that bed, and as it turned out, nobody did!

I was told we would be leaving Yurimaguas at 6pm the following day - good I thought, I will get there by 2pm. I spent the next day having a look around Yurimaguas and then headed to the ferry. There was a lot of activity happening when I arrived with men carrying sacks of potatoes and rice aboard from trucks parked nearby. They just kept on unloading and unloading, then another truck would pull up! I soon realised that we wouldn't be leaving at 6pm at all. I asked a few of the other people what time they had been told, funny, we all had been told a different time! I am sure the ferry was never going to leave before that night, obviously not until all that cargo was aboard. Haha, in the end we didn't leave until 8am the next morning, quite hilarious really and part of the adventure. It was interesting to watch the action and was a bonus free nights accommodation!

Finally we were on our way, a morning departure means an afternoon arrival 2 days later (3 days / 2 nights). Cellphone coverage was gradually lost as we headed downriver towards the first main town (community) Lagunas. Speaking of cellphone coverage you are better off in these parts with Movistar, not Claro, some of the river towns have coverage!

The days are spent relaxing, reading, playing guitar, enjoying photography and just taking it all in. The sunsets are great too! It's a slow pace on a ferry at speeds of only 13-17kms per hour!

Change to the Marañon River

Lagunas we stopped at during the night and by 8am we had arrived in Maipuco, we were now on the Marañon River, much larger than the Huallaga. This day would be very interesting indeed as we travelled along the river beside the Pacaya Samiria National Reserve. As we pulled in to Maipuco, half the town was lined up waiting to board so as to sell food and drinks to the hungry passengers and crew, quite a sight! Maipuco has a cellphone tower, time for a quick tweet or social post!

From Maipuco to San Pedro to Saramuro. I enjoyed seeing the wooden thatched roofed houses on the banks of the river and the communities and people living there. It got quite interesting when we got to Saramuro. A huge protest with banners telling the petrol companies to stop abusing and contaminating the rivers and that their fight is a matter of life and death! The community although dressed in normal clothing wore feathers around their heads and carried spears! We were told not to take any photographs, but I did get a few. During the rest of this 2nd day we passed through Nueva Elmira, Ollanta and Roca Fuerte and I started seeing a bit more bird life among the trees. Locals sometimes would wave a sheet or t-shirt from the banks to have someone or something brought out to the ferry by motor-canoe.

Food Onboard the Ferry

The food onboard (included in price) was quite basic, mainly white rice with a small piece of chicken and some fried banana. The meals on the Brazilian ferries were much better with more variety.

Sunsets on the Horizon

Another orangey sunset, then I chilled in my hammock until late, talked with some of the mere 15 backpackers on my deck (all the locals and families were on the first deck) and finally sleeping in my cabin.

Start of the Amazon River

By around 5am we arrived in Nauta (a major junction / town / community in the Amazon), the last port before Iquitos! It is around 15kms north of Nauta where the Marañon River is joined by the Ucayali River to become the amazing fantastic wonderfully awesome Amazon River!!! The weather really packed up and went to the dogs for most of this 3rd day with heavy rain. By 3:30pm we had arrived at the port in Iquitos! From the port just take a crazy mototaxi ride into town for $5 Soles ($1.50USD)!


View all photos in the Yurimaguas to Iquitos Photoset 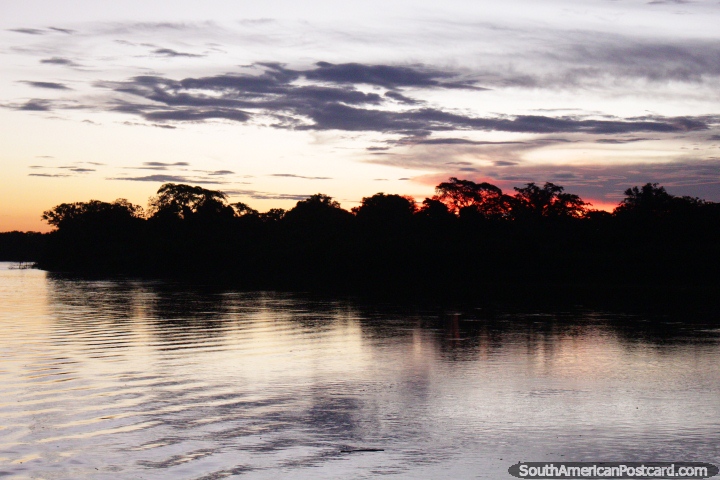