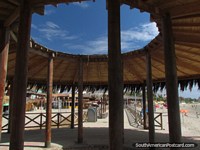 The boardwalk behind the beach at Mancora. 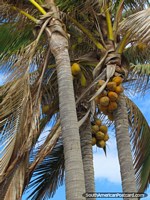 Yellow coconuts in a palm tree at Mancora beach. 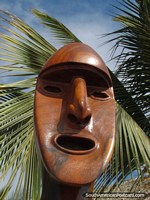 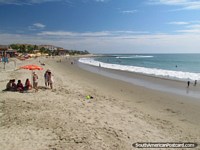 I arrived in Mancora at 11pm from Trujillo, stepped out of the taxi-van and was immediately hounded by 4 mototaxi drivers asking if I needed accommodation and that they knew of a good place. All talking at the same time. I chose one to take me for a short ride to a cheap crash pad by the beach which cost only 15 Soles ($5USD) per night. It was a basic room with my own bathroom and bed with mosquito net. The 2nd time I stayed in Mancora the same thing happened except that I knew I could just walk there myself, it only takes 2 minutes. There was some partying going on at one of the beach bars so I went for a quick drink and then hit the sack. The mosquitos are large and vicious to say the least. Although I had a net around my bed, they managed to get to my feet and head through the netting.

The main attraction at Mancora is the beautiful beach and great surf. It is a lovely bay with hills at the back, a main street, and many restaurants and bars on the beachfront. The fishing village is at the southern end. There's palm trees, clean air and beautiful white sand and coastline. On the beach they set up gazebo's with tables and chairs where you can sit and order a cold drink. Although I was not here in peak season, it was quite hot and there were a lot of people on the beach and many surfers surfing the nice looking waves. I saw some people riding horses up and down the beach and a man who was selling ice-cream. The name of the main beach is Del Mar. It is not the flashest resort type of place in the world but it has a great laidback feel. You could have a great time here with a bunch of friends in the high season. I spent a couple of days and nights here both times just relaxing, eating, drinking, swimming and beaching.

The prices in the restaurants are more expensive than other places in Peru as well as other general items. If you plan to go to Mancora for around a week, I would advise bringing some non-perishable snack food.


View all photos in the Mancora Photoset

Hospedaje Angeles Del Mar, Mancora, Peru (Jun 2009 - 2 nights, Jun 2012 - 2 nights) - 15 soles per night for an extremely basic concrete floor room with dingy bathroom and average bed with mosquito net. It's right beside the beach and suits young surfer people or people who like to rough it sometimes like me. The mosquitos are the most vicious I ever met, the net around the bed was under full attack! I came to stay again in 2012 for a couple of nights, I liked it! Recommended.
Peru Travel Blog | Photos of Peru | Festivals in Peru | South America Videos 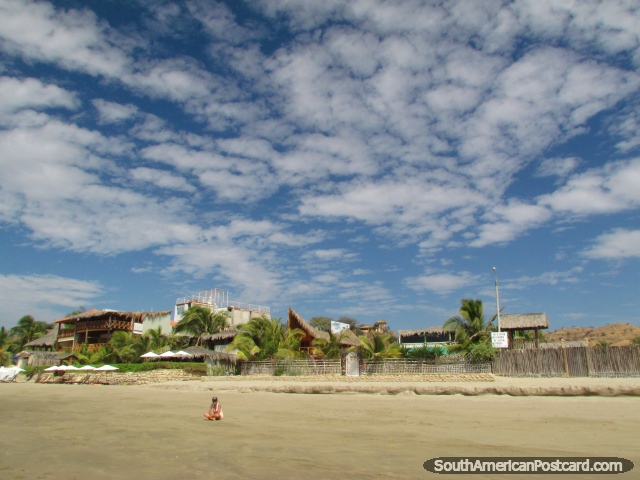