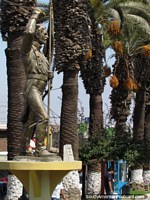 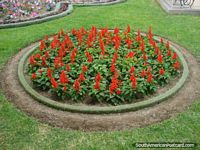 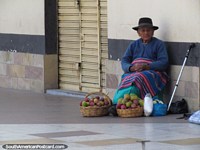 A woman sells fruit from a pair of baskets on a Tacna street. 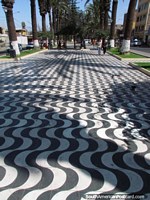 The walk in Tacna is very long and has black and white curvy stripes.
Map location: Tacna, Peru

2015 I came through Tacna this year on a flight from Lima so to get from Tacna to Desaguadero on the border of Bolivia which took 6hrs 15mins in a shared van. We passed through Moquegua, a place I had visited a few years earlier. Tacna is very much a travel junction, north, south or east!

2014 I came through Tacna twice this year, once when I passed through heading south on my way to Arica Chile and then on the way back stopping to spend a few hours walking around taking some more photos before a flight north to Lima. I found a few new things I hadn't seen on my previous stay here. There is some nice gardens around Pasaje Vigil and a few bust monuments. There are also 2 people in the garden made of flowers. I took a long walk along the black and white striped boulevard, there's a ton of busts there of important people. I was also on the lookout for any graffiti art or murals. I came across a blue church called Parroquia Espiritu Santo. Tacna must have about 1000 palm trees, they are everywhere! I had a nice lunch at Santo Pecado Restaurant and walked to the main plaza. I enjoyed the gardens for a short time and then waved down a taxi to take me to the airport for my flight. Actually the best wall mural in Tacna is between town and the airport / border with Chile. It is of a Peruvian woman with a black hat and traditional clothing. I asked the taxi to stop so that I could get a picture. Tacna is certainly worth a quick look if you have time before or after crossing to or from Chile.

2009 I arrived in Tacna in the evening from Chile with the intention of staying 1 night and continuing north to Camana the next day after having a look around. After 2 bowls of chicken soup from across the road and a good nights sleep, I wandered around the city and headed for the main plaza to take a few photos. Along the way I came across a statue in a fountain of Romulo Cuneo Vidal, the Peruvian historian who lived from 1856 - 1931. There are gardens with a wooden tree statue and bird there also. I walked down a nice palm tree lined walkway towards the plaza. As I got closer I was not disappointed as it was looking like there were some cool things to see. I came across a mermaid-like statue, a heart shaped garden with flowers, a great big archway with 2 important looking statues of men on each side guarding the entrance. I saw some kind of sundial, an amazing fountain feature which all led towards the beautiful cathedral. There were several tourist police in the area keeping an eye on things. I also came across on the way back to the hotel, a statue of Francisco de Paula Gonzales Vigil - I think a former priest who became a parliamentarian.

After getting my backpack and paying the hotel bill, I made my way by taxi to the bus terminal to head north to Camana, an 8-9 hour journey. As soon as I stepped foot out of the taxi at the terminal a man started shouting to me 'amigo, amigo, where are you going? Arequipa? Lima? Chile?'. I said no, I wasn't going to any of those places, but he kept asking me where I was going while I was walking away from him into the terminal. I eventually said I was going to Camana for which he told me that for 50 soles I could get a bus in 10 minutes. Then basically without me asking he decided to become the middleman between myself and the bus company desk, he asked for my passport and started booking my bus for me. The bus ended up only being 40 soles and the other 10 soles was to be his commission for helping me. Not that I need help with booking my buses or even asked him to help me in the first place, but I reluctantly gave him his 10 soles and said thanks. After that I thought I was a bit stupid for falling for that trick! But it got worse because the bus I was on, I was sitting down the back, each time the toilet was flushed a strong chemical smell was released into the back of the bus for which I endured for about 9 hours. The bus company was called 'Flores' and I never travelled with them again after that. I tried the company called 'Cial' a few times from then which were quite good and came with a hostess and good food.


View all photos in the Tacna Photoset

Hotel Tony, Tacna, Peru (December 2019 - 2 nights) - I stayed at Hotel Tony for a couple of nights, each night in a different room. First night, a room for 1 for $50 Soles ($15USD) with private bathroom, tv and wifi. A room back from the main street for peace and quiet. The 2nd night, a family room upstairs at the front of the building with a lot of street noise. A large room with 3 single beds for $90 Soles ($27USD). The hotel is located just 2 blocks from the middle of the main street, just up from the cathedral. A handy location to shops and restaurants. A good budget hotel.

Copacabana Hotel, Tacna, Peru (September 2015 - 2 nights) - Copacabana Hotel is one of the many overpriced hotels in Tacna. $110 Soles ($35USD) for a double room with bathroom, cable tv and wifi. The place is nice enough but my double bed was sunken in the middle which made it uncomfortable so I had to move to the single bed instead. Breakfast is included but they don't include anything with it. It is 3 pieces of bread, coffee and juice, that's all! Where are the eggs? What, I need to pay for those? Sorry, that is not a breakfast, how disappointing. I cannot recommend the Copacabana Hotel for these reasons, there are many other hotels to choose from!

Hotel Royal Inn, Tacna, Peru (May 2009 - 2 nights) - Big spacious room with bathroom and tv, well priced, good staff and in the center of town. The biggest room I have had in South America!
Peru Travel Blog | Photos of Peru | Festivals in Peru | South America Videos 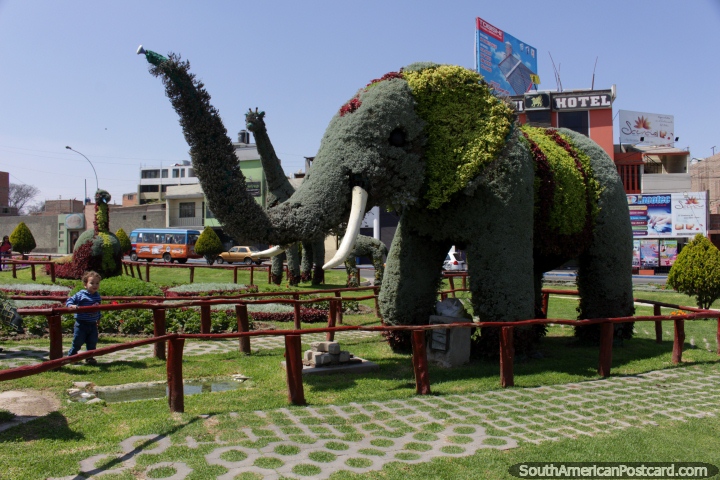