Chimbote, Peru - Port Town, Not A Bad Place At All 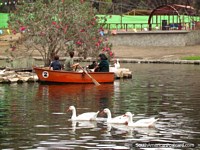 Paddling around the lagoon in a small boat at Vivero Forestal park, Chimbote. 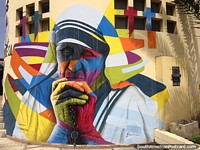 Colorful mural of Mother Teresa on the waterfront in Chimbote. 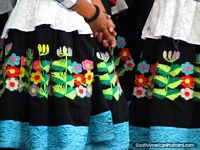 Colored flower designs on the traditional dresses worn at a festival in Chimbote.

In 2012 I returned to Chimbote and stayed a couple of nights. I got to know the city a lot better and saw some more sights. The same friend from my first trip showed me around. I was fortunate to be here on a weekend of festivities and watched a couple of shows in the plaza beside the sea during my stay.

Chimbote's oldest main square - Plaza Mayor, is quite far out of the center and although the area of New Chimbote is not that attractive, the plaza probably is more so than the plazas in the city center. The cathedral (Catedral Nuestra Senora del Carmen y San Pedro) stands on one side, it has 2 belltowers and was built by the Italians. It wasn't open at the time but the photos I have seen look pretty impressive with it's dome and artworks on the inside.

From here by taxi we headed into the center of town, to Plaza Grau (where the festivities were being held), this is where most people in Chimbote hangout. The plaza is dominated by a monument of naval officer Miguel Grau Seminario (1834-1879). Beside the plaza and sea were a bunch of llamas with colorful woollen accessories and nearby an old shipwreck in the water.

Next, my friend suggested we visit what she described as 'a nice place in Chimbote', a big park called Vivero Forestal. There happened to be a fair going on called 'Feria de Integracion San Pedro'. This place could be nice, that is if they planted some grass. Basically it was a park with trees, gardens and a duck pond, but it wasn't at all green or inviting. Just brown and definitely not my idea of a nice place, (sorry Paula).

Back into the center and a walk through the art fair along Isla Blanca Boulevard and to have a look at all the statues and artworks along this public walkway. A lot of the art pieces are centered around children playing with fish like dolphins and turtles. There are a few other statues to various people including Jose Garcia Polo, the fishermen and workers, writer Dr. Carlos Salazar Romero and political leader Victor Raul Haya de la Torre (1895-1979).

Enjoy the performances by local school groups dancing and playing music in Plaza Grau. I made this video of the show.

Apart from having the biggest fishing port in Peru, Chimbote has several beaches and there are coastal walks, swimming and surfing. Most popular are Playas (beaches) Caleta Colorada, Vesique and El Dorado. Climb to the top of Cerro de la Juventud (Mountain of Youth) for panoramic views of the city or go on a boat cruise out to Isla Blanca (White Island).

Not A Bad Place

Chimbote is a nice enough place but probably not somewhere you would go out of your way to visit. It has some cheap hotels and restaurants in the center of town and the people are quite friendly.

In the morning I wanted to spend the day traveling north. The first bus of the day was up to Trujillo (2hrs 30mins), then another for 6hrs up to Piura and then another ride for 2hrs 30mins in a combi van up to Mancora.

The first time I stopped in Chimbote was for a few hours to have lunch with a friend who lives here and then we travelled 6hrs by bus south to Lima. The prices of the buses varied a lot, we got a ticket for $20 Soles in first class which was a good deal (2009).

Chimbote is a place that makes fish oil, the whole city smells like fish, quite strongly. But you get used to it and don't smell it at all after a while.


View all photos in the Chimbote Photoset

Hotel Luzanty, Chimbote, Peru (August 2021 - 3 nights) - I had an awesome room on the 5th floor with great views at Hotel Luzanty in Chimbote for $70 soles. The rooms are very clean with a comfortable bed, private bathroom, tv and wifi. With views from 2 sides overlooking the sea. The staff are helpful, relaxed and friendly and the hotel is close to restaurants and shops. Recommended. 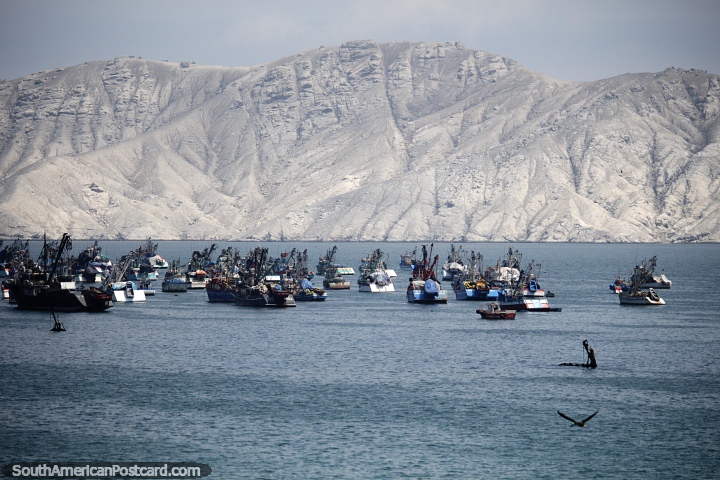