Puno to Yunguyo, Peru - 2 Hours In A Co-op Taxi Van Beside Lake Titicaca 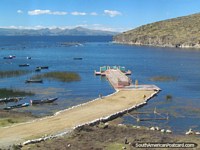 A wharf and beautiful bay near Zepita at Lake Titicaca. 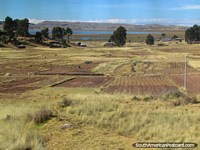 Farms and crop fields around Lake Titicaca near Huisahuinica. 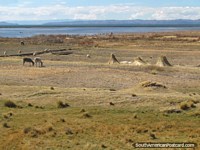 Donkeys, sheep and hay near Lake Titicaca near Zepita. 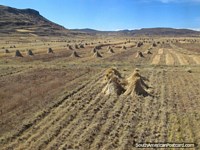 A field of haystacks north/west of Llave.
Map location: Puno to Yunguyo, Peru

From Puno I wanted to go to Copacabana on the Bolivian side of Lake Titicaca. I have spent a few days at Copacabana on 3 occasions. On my first trip I came here from La Paz in the south, the other times from Puno in the north.

I Took The Wrong Bus

One time by mistake from Puno I got on the wrong bus which was going to Desaguadero on the other side of the lake from Copacabana instead of a bus to Yunguyo. Note: It is not a bus, it's a co-op taxi van! I didn't realise there were 2 border crossings in that general area. I had crossed the border before at Yunguyo and didn't recognise the town of Desaguadero when I got there. But I crossed the border into Bolivia, through immigration and customs and then asked a taxi to take me the short distance to Copacabana. But they said I had come through the wrong border crossing and I needed to go back into Peru and go around to Yunguyo which would take around an hour or so.

So I walked back into Peru without going through immigration and the taxi took me around to the Yunguyo border control. I got there and the 2 immigration officers looked through my passport and said that there was a problem because I had been in Peru illegally for the past hour. After they looked through my passport and thought about what they should do, they decided that if I gave them $10USD each there would be no more problem and I could go through without getting another stamp and because I was heading to La Paz after Copacabana, it would be OK! So I finally made it to Copacabana from Yunguyo in a short 10 minute taxi ride... eventually.

The scenery alongside Lake Titicaca between Puno and Bolivia isn't bad. You will see the locals houses, farms, animals and crops beside the lake and fishing nets in the water. Plus jagged rock formations in the backdrop. Cross the border into Bolivia and it becomes more beautiful. On my third occasion passing through Yunguyo in 2011 I saw a little more of the town including the monuments and church around the plaza. I sat down at a restaurant nearby and had soup for lunch before crossing into Bolivia. In 2012 I did another journey beside Lake Titicaca, this time from Desaguadero up to Puno and Juliaca, then onto Arequipa. It took 9hrs 30mins in all. I enjoyed again the beautiful views out on the right-hand side of the lake, fields and hills and the sight of local people living from the land.


View all photos in the Puno to Yunguyo Photoset 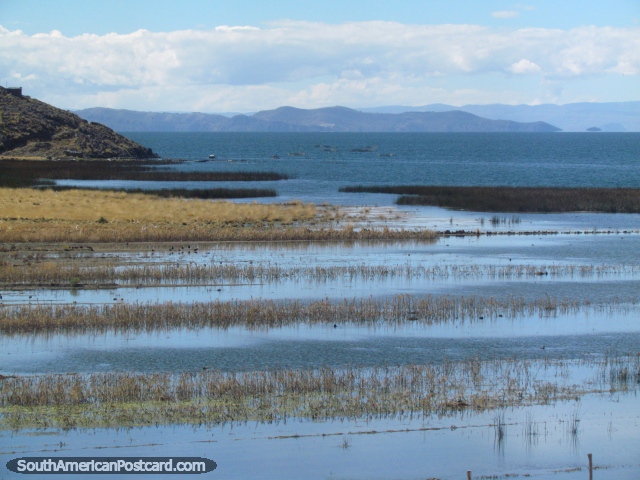