Tarapoto to Yurimaguas, Peru - Going To Yurimaguas For A Ferry To Iquitos

A wooden house stands on the other side of this huge green field, south of Yurimaguas.

The last stretch of road in the Peruvian northeast runs from Tarapoto to Yurimaguas.

Rocky river and thick jungle beside the road to Yurimaguas from Tarapoto.

The last stretch of road in north / east peru that connects to the rest of the country runs to Yurimaguas from Tarapoto. From Yurimaguas it's all down river baby! This ride from Tarapoto to Yurimaguas takes 2hrs on a winding paved road and goes through a heavily forested area (the Cordillera Escalera), make sure you eat well like I didn't.

One word of warning is that I saw armed men once or twice in this area acting as security against, I imagine - bandits. Afterall the road up to Tarapoto from Tingo Maria has the same problem, but much worse!

After we had driven through this forest we hit the small town of Pongo de Caynarachi. Like I mentioned I hadn't eaten so well before leaving Tarapoto that morning and wasn't feeling that great by the time we arrived here - so I got out and hung out in Pongo for some food and to let my tummy settle. I picked up the journey in another car for the last 69kms to Yurimaguas from here.

The trip is done in cars by companies with an experienced driver, there are no buses. These cars go back and forth all day long, when the car has 4 people, they leave.

Things To Do Along The Way

Just out of Tarapoto as you enter into the Cordillera Escalera, there is a place called Alto Ahuashiyacu where you can see monkeys, tucans, flora and fauna. Nearby there is a theme park called Parque Tematico Chullachaqui which also has animals as well as models of large dangerous beasts. There is also a lookout point - Mirador Alto Ahuashiyacu for views and photos plus waterfalls - Cataratas de Ahuashiyacu. About half an hour on from Ahuashiyacu is another waterfall called Cascada Pishurayacu and some thermal waters (Aguas Termales).

It's the End of the Road Baby!

After a slightly longer journey than I had planned because of my food stop I arrived in Yurimaguas. I noticed in the corner of the 'Welcome to Yurimaguas' sign, some distances to other places: Iquitos 668kms, Manaus (Brazil) 2550kms and the Atlantic Ocean (coast of Brazil) 4050kms. And of course the only way to get to any of these places from here is by river. It's the end of the road baby!

After arriving in Yurimaguas and finding a cheap place to crash the night, I headed down to the port to look for a boat going soon to Iquitos. I found one instantly, a large cargo and passenger ferry due to leave the next day. I went to see the captain and payed $150 Soles ($45USD) for a cabin. Done deal!

I had a look around Yurimaguas, found a few murals and saw the historical buildings and church around the plaza. I ate Chinese food and relaxed until the next day in waiting for the grand exit down river to Iquitos!


View all photos in the Tarapoto to Yurimaguas Photoset


My Hostel & Hotel Reviews for Tarapoto to Yurimaguas, Peru: 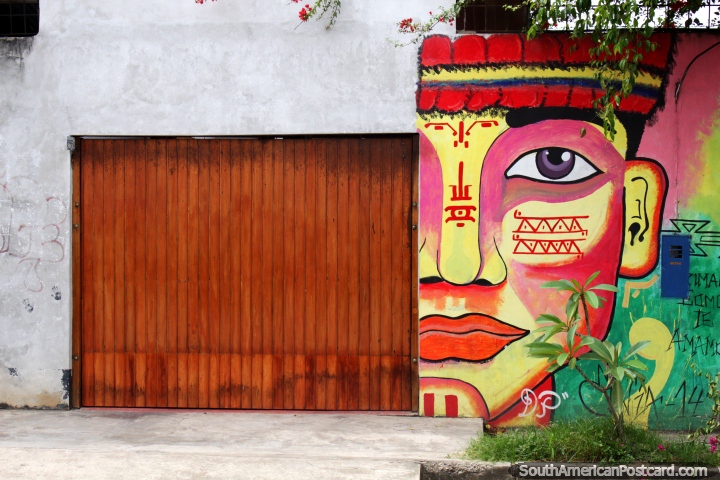