The 6 hour journey from Tacna to Desaguadero passes grasslands and rocky hills. 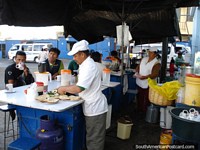 An outdoor kitchen in Moquegua, the man makes avocado rolls.

West of Desaguadero, near the border of Peru and Bolivia.

2010: I turned up in Moquegua after leaving Arica in Chile in the middle of the day. Firstly the border crossing into Peru to Tacna bus terminal by co-op taxi. Then from Tacna by bus for about 150kms to Moquegua. I chose to visit Moquegue simply because I had already stayed in Tacna, Camana and Arequipa a year before. This was the beginning of my 4 day dash up the coast of Peru from south to north so that I could continue my travels in Ecuador and Colombia. I had already seen the coast of Peru twice before on other trips.

It was late afternoon when I arrived in Moquegue and I found myself a room in a good cheap hotel. I got some food at a street cookup where I sat down with the locals and then later had a good nights sleep. I had had a lot of travel this day. The altitude here is over 3500 meters above sea level. The area is surrounded by valleys and in the distance by mountains where on the top of one is a Jesus statue that is clear to see from town. The streets here are nothing flash, just typical Peru style housing with a touch of ramshackle. There are several bus companies running from here and they are all on the main street. There are regular buses to Ilo which is a popular coastal destination from here.

I got the feeling after walking around for a while that one of the main crops grown in this region is the avocado. There were many people on the streets selling them and you could buy avocado sandwiches at stalls also. For my first meal of the day I had avocado sandwiches and a bowl of chicken foot soup. Then I walked to a different part of the center 10 minutes away passing people sitting having meals at the street cookups along the way.

I came to a busy little roundabout where there is a monument of a man in a wheelchair, it says Homenaje A Mariategui which is refering to Jose Carlos Mariategui, a Peruvian journalist who lived from 1894 until 1930. Walking along a street from there on the left is the market Mercado Central de Moquegua and on the street side itself are many stalls selling items. Traffic stopped at red lights are entertained by a boy doing handstands and cartwheels for loose change. A busker plays classical guitar and a man with no hands plays a recorder at separate places along the street and I see more avocados for sale. I didn't see it but there is a cathedral here called Catedral Santa Catalina.

I went back to my hotel and paid a few more Soles so that I could have the room until 6pm. I booked a bus with a great bus company in Peru called Cruz del Sur on the main street. It was nearly twice as much as what the other companies were charging but it was because a friend of mine was in a crash in Peru the year before in a bus with a dodgy company. The ticket was $110 Soles to take me north to Nazca through the night leaving at around 8:30pm and taking about 7hrs. The service is great with this company with an attractive hostess and proper hot meals. After sleeping in the afternoon in my hotel to rest before the bus journey that night, I ate a meal at a local place called Restaurant La Tacnenita. The lady charged me more than she charged the locals at the next table for the same dish.

Through the night I travelled north to Nazca to rest up before the next part of my dash up the coast. I arrived in Nazca for the 2nd time at about 5am and waited at the terminal until the sun came up a bit. Then I walked out and found a bed in a room to sleep in for a few hours before I hit the road again in the early afternoon going through Ica and onto stay the night in Chincha Alta.

2015: I passed through Moquegua from Tacna on the way to Desaguadero on the border of Bolivia, there are some good photos of the journey!


View all photos in the Moquegua Photoset

Hotel Jupiter, Moquegua, Peru (May 2010 - 1 night) - A room for about $9USD with bathroom, the bed was OK, located at the bottom of the main street near a parque and close to all the bus companies.
Peru Travel Blog | Photos of Peru | Festivals in Peru | South America Videos 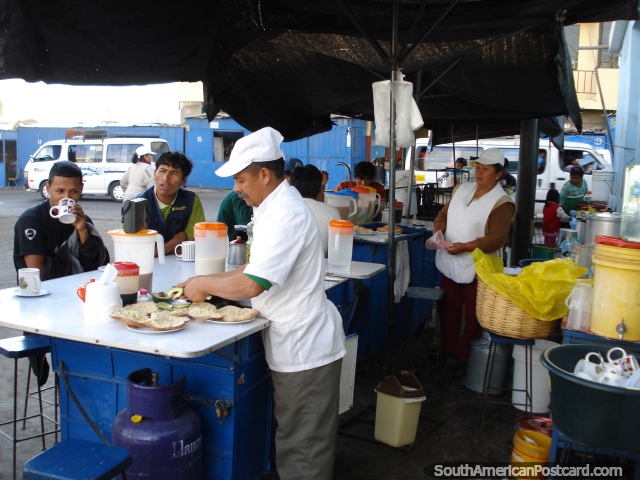