Huamachuco to Caraz, Peru - 20hrs By Bus Glad To Be Alive 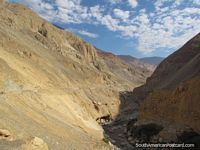 Road following the valley through the rocky terrain near Chuquicara. 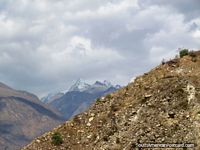 A glimpse of snow-capped mountains near Caraz. 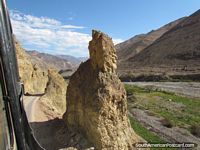 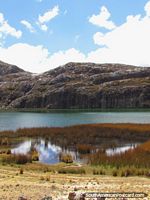 The best way to describe the journey from Huamachuco to Caraz in the highlands is 'pure hell'. In total it took around 20hrs in crappy buses on the most roughest of unsealed roads that weaved around cliffs with sheer drops of 100 meters or more. It took 2 and a half days to complete. This journey is definitely not on the gringo trail. I would not recommend it to anyone nor would I ever want to do it again!

The most intelligent way to get from Huamachuco to Caraz is to go to Trujillo, then down the coast to Chimbote or Chiclayo and then up into the mountains to Caraz from there.

My way was like this! From Huamachuco 1hr to Shorey, 2hrs to Santiago de Chuco, 6hrs to Mollebamba where I spent 1 night. Next morning 2hrs 30mins walking to Mollepata, 6hrs bus to Chuquicara and sleep 1 night. Next morning 4hrs to Caraz. What was I thinking? What I was thinking was this - that I wanted to travel from north to south Peru only in the highlands. I pretty much did that except for a slight coastal detour further south in Lima.

The Journey in Detail

Here is the story of the trip from Huamachuco to Caraz. Leaving Huamachuco in a co-op taxi to Shorey, a sign says 178kms to Trujillo, through La Colpa, Choquisonguillo, interesting rock formations and boulders on the hills, 141kms to Trujillo, road works and a beautiful lagoon, more Stonehenge like rock forms, stop in the small town of Quiruvilca, arrive in Shorey.

Waited for a bus to Santiago de Chuco for over an hour, then took another to Mollebamba, arrived in Mollebamba late at around 9:30pm. Nothing here, nothing open, found a bed in the town center, just a little shack of a room. The woman gave me something basic to eat. I slept and got up around 4:30am and walked for 2 and a half hours over the hill to Mollebamba.

It was early, before 7am. I got some breakfast of fish at a womans house and waited until after 9am for a bus to Chuquicara. Mollebamba is a tiny place at 2677m above sea and has a little white church, the plaza is surrounded by old colored houses with balconies.

After leaving Mollebamba, a couple hours later we stopped in Pallasca. It has a tidy plaza, gardens and church beside. I had not been able to get to an ATM machine since Huamachuco because there aren't any in these places and I was very low on money. I asked around to see if anyone wanted to buy my cellphone and was lucky to find a buyer, so I now had enough money until Caraz.

The next 4hrs on the road to Chuquicara was extremely rough, weaving and winding roads of rubble high up in the mountains on the edge of extreme drops. At around 4pm I arrived in Chuquicara. There's nothing here apart from a police station, a restaurant and ladies selling oranges, but buses pass through to and from various destinations like Chimbote on the coast and Caraz in the mountains.

Sleep at the Police Station

Unfortunately it was too late in the day to get a bus to Caraz and there are no hotels in Chuquicara and I only had enough money to get to Caraz. The policemen at the station in Chuquicara were quite friendly, my girlfriend who speaks fluent Spanish was chatting a lot to them. They were good guys, they offered to let us sleep in a room at the police station for the night, which we gladly accepted. Next morning after saying thankyou and goodbye, a bus to Caraz came through.

This 4hr journey would be the last leg in 2 days of hard travel. The trip to Caraz is on a road cut into the most roughest and jagged of terrains and follows a river surrounded by black and grey rocks and hills. We came to a small town called Huallanca, one of the first places with greenery I had seen on this day. A lovely little town that is dwarfed by the mountains that surround it. For the last hour from Huallanca to Caraz as we climbed higher into the mountains the scenery got more and more spectacular on the lefthand side with the sight of waterfalls beside the road and glimpses of snow-capped mountains in the distance. We passed through many tunnels as we climbed higher and higher to Caraz where I spent the next couple of nights.


View all photos in the Huamachuco to Caraz Photoset


My Hostel & Hotel Reviews for Huamachuco to Caraz, Peru:

The Police Station, Chuquicara, Peru (August 2011 - 1 night) - The police in Chuquicara were very good to my girlfriend and I when they invited us to stay the night in a spare room at the station when there were no more buses going anywhere that day. Best of all, it was free!
Peru Travel Blog | Photos of Peru | Festivals in Peru | South America Videos 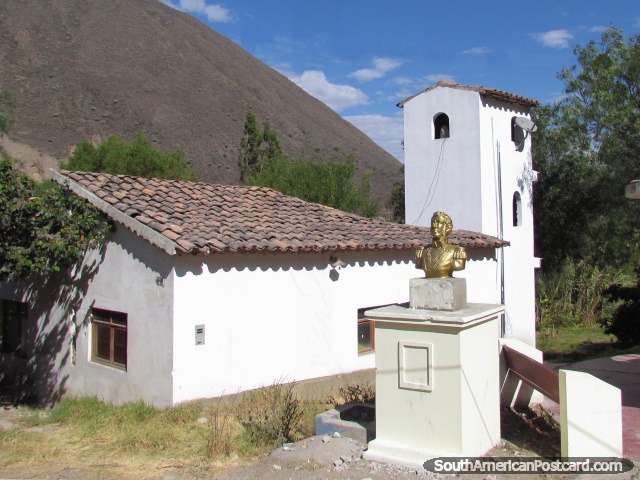