Chincha Alta to Piura, Peru - 22hrs On A Bus Up The Coast

I left Chincha Alta after lunch on a bus up to Lima and then took another bus north during the night up to Chiclayo and then took another bus to Piura. This part of my dash up the Peruvian coast from south to north would take 22hrs from leaving Chincha Alta to arriving in Piura. Traveling by bus is twice as fast in the northern half of Peru than it is in the southern half. The roads are much straighter and you can cover larger distances more quickly.

Leaving Chincha Alta and heading north for around 3hrs to Lima. I had done this leg before in both directions so I knew that the scenery was not great or pretty. We immediately passed a sandy desert with simple self-made brick houses scattered around with some made of lighter materials. We passed over a river with a stony bed on a bridge around some farms and crop fields. After 25 minutes there was a big building on the right that looked like a palace with towers, pillars, lookouts and walls surrounding. It is across a field of crops and has palm trees nearby. A couple of minutes later we came to the town of San Vicente de Canete passing many side streets with houses and shops and the Supreme Court. There is a sign saying a place called Lunahuana is 40kms to the east inland. Between Canete and further north to La Capilla we travelled through several little towns. I began to see on the rock hills near the road some shack and slum housing. There is a nice yellow church as we travel this leg on the right side then we pass more fields and livestock. Lots of hills on the right now come into view, some have simple houses built on the sides. Soon after I spot many locals working in a field of crops, this was the first big green space I had seen for a while. Then come all the chicken houses up on the sand hills and a village called Chilca is off to the right. Soon we go past more cheap housing extended all the way up to the hills. We are starting to get closer to Lima. We pass Parque del Recuerdo on the right and this is where the real slum housing starts up on the hills. There are long yellow staircases going up the side of the hills in these slum neighborhoods.

As we come into central Lima the city is not pretty on the south side either, the slum city on the hill goes on for miles and miles. When the bus pulled into the terminal I took a taxi to the depot of a bus company that goes north to Trujillo and Chiclayo which was leaving around 8:30pm. I had time to go out and find food and also to use the wifi in the bus station. The 3 nice ladies at the desk looked after my backpack. I had bought a ticket for Trujillo which would take 8-10hrs. By the time we got there at around 5am I had changed my mind and said I would continue on the bus to Chiclayo. I paid the difference once I got to Chiclayo bus terminal after the sun had come up. With 60kms to go before getting to Chiclayo that morning there was now light and I could start taking photos again. A sign pointed to the left and said Cerro Colorado (a mountain) and Zana is 22kms toward the northeast. We rolled up the Panamericana Norte and passed through the small town of Mocupe and then another called Reque which has a monument of a woman as you come in. On the ground in front of her it says in big letters 'Madre' (mother).

A few kms later we enter Chiclayo. This was the 3rd time I had been in the city, always passing through although I did spend a few hours looking around the city on an earlier visit. I didn't stay long this time, less than an hour. I wanted to continue onto Piura which is north across the desert. Outside the bus station in Chiclayo I had some food and a nice spicy milky drink from a glass. While leaving the city I again saw the big Jesus statue on the hill and the monument to Sipan, this part of the journey to Piura takes 2 and a half hours. First town we passed near is Morrope, not much there apart from a few donkeys and rubbish scattered around. Now on the northern side we go through the toll station where a lady is selling a type of fruit that looks like a giant bean, they are delicious. From here the distances are Piura 183kms, Sullana 254kms, Talara 328kms and Tumbes 500kms.

This is the point where it turns into a desert with rubbish on the sides of the road for nearly the next 2hrs. Half way through this nomans land I see road kill and a wild dog feasting on it, nearby wait several vultures. There is the occasional sign of life out here with a restaurant or 2 and people living in basic housing. There is Restaurant El Crucenito and also Restaurant Nocturno. Shrubs, sand and plastic bags blowing in the wind, wooden shacks, donkeys, tyres and then Restaurant Monica. A shelter on the side of the road built from sticks shades cold bottles of drink. There is a school with children playing outside in the hot sun and lots more shack housing. It is now only 20 minutes before Piura and soon we come to the toll station Estacion de Peaje Bayovar with ladies again selling the green bean type fruit to passengers. Northern Peru starts getting a little tropical, we pass on the left a banana plantation and also see palm trees. We head across a river and past a nice white and blue church, then past a vast shantytown with dirt roads before coming into the more central part of Piura where I got off the bus and found a room and bed for the night.


View all photos in the Chincha Alta to Piura Photoset 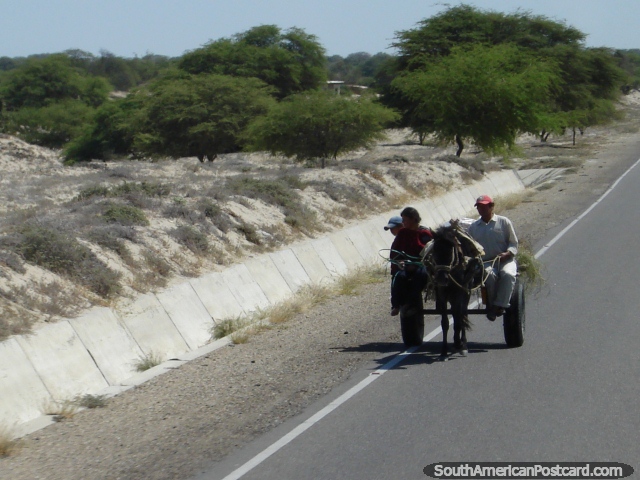