Bogota, Colombia - Top 6 Things To See & Do In The Capital

Beautiful streets in the upper area of La Candelaria, quite fashionable, Bogota.

Lone palm tree grows beside the tower of Bartolome College in Bogota.

Passageway of red love hearts, a bohemian area in La Candelaria in Bogota.

Bogota is a huge city, the primary difference from the other places in Colombia that I have visited is that it is much colder, especially at night! It is the most colonial of cities I have been to in Colombia. North of Bogota are some great and popular destinations, they being the colonial town of Villa de Leyva, the salt cathedral in Zipaquira, the Spanish style town of Guatavita and Tunja - a place of interesting street food. West of Bogota if you like the jungle and river excursions is Girardot.

Plaza Bolivar is a huge open space with many interesting buildings surrounding it including palaces, government buildings and churches. Of course there is a monument to Simon Bolivar right in the middle. It was at the end of the day when I got caught up in a huge student protest right there, where students climbed up on the monument and dressed Mr Bolivar up in alternative clothing while the riot squad formed barriers between them and the government buildings. Around this amazing plaza you see domes, clock and bell towers, statues of important people including Camilo Torres (1766-1816) a politician and Bartolome Lobo Guerrero (1546-1622) a founder. In one corner of the plaza on a tiled roof sits a sculpture of a man sitting. All around are interesting buildings like churches, colleges and monuments.

Up the hill are the historic cobblestone streets and colorful houses known as La Candelaria, there is a lot to explore here. Many of the houses have sculptured bronze figures on the roofs or balconies. It is a beautiful and colorful part of the city and has a lot of character with the hills in the background and the church on top of Cerro (Mountain) Monserrate visible from everywhere.

There is a small plaza that is in the heart of La Candelaria called Plaza del Chorro de Quevedo, a monument of an acrobat juggling 3 pins while riding a one-wheel bike stands on top of an archway. There's colorful street art on the walls, a white church and a cafe. This area is generally not policed but there are security men around so be a little more careful when walking around. There is an amazing narrow alleyway that leads off this plaza heading down, the walls are painted with colorful murals of weird and wonderful things. There are art shops and hostels here too, it is a bit of a hippies area and a students hang out. At the bottom of this alleyway there is another open area. The residential streets with their interesting colorful houses are definitely worth a look.

The park of water, Parque Aguas is a series of water pools that flow from one to the other. It's nothing spectacular but a nice area to have a seat in the sunshine if there happens to be any. Nearby is a big dome stand with pillars and a statue of Simon Bolivar in the middle. A building that looks like a palace Academia Colombiana with its grand pillars has monuments to Felix Restrepo S. J. (1887-1965) director of the school and to Miguel Antonio Caro (1843-1909) scholar and poet amongst other talents. Nearby is Parque Santander with its statue, pigeons and stalls selling yummy sweet things to eat. Around the corner is a great stone church Iglesia de San Francisco constructed in 1550 and taking 17yrs to complete. Nearby stands a statue of Carlos Lleras Restrepo (1908-1994) the President of Colombia from (1966-1970). Bogota is full of history and historic architecture!

By taxi is the best way to get to Cerro Monserrate and bought a return ticket for the cable car to ascend to the top, the ticket is around $7,000 pesos each way. Monserrate is 3152 meters above sea and is the symbol of Bogota. At the foot of the cable car are some nice gardens and waterfalls. The cable car takes you up for fabulous views of the whole city, especially if it's a nice day. In my case it wasn't particually. At the top is the white church Santuario del Senor de Monserrate with its archways and colored stained glass windows. Outside are nice pathways for walking around to see the gardens, statues and monuments for which there are many. The air is very fresh up here indeed.

Museo del Oro is the famous gold museum. It has many many pieces of gold-work including jewelery, figures, faces, masks, tools and ornaments. All kinds of things.

A short walk away is Museo Botero which features the work of Fernando Botero and his amazing sculptures and paintings. If you have visited Medellin you no doubt would have visited Parque Botero in the city. Museo Botero has many paintings by the man including Madre Superiora, La Carta, Naranjas, Pareja Bailando, El Presidente, Mona Lisa and lots more. Some of the bronze works include Gato, Maternidad, Adam and Eve (Adan y Eva) and Venus Dormida, it's worth a look!

Museo Militar, the military museum 1 or 2 streets away from Museo Botero. On display are canons, guns, missiles, rockets, bombs, planes, helicopters, tanks and monuments to men such as Alexandro Ioan Cuza and other military leaders. The place is run by the military, figure.

The Museo de La Independencia is a huge museum with different floors and many things to see to do with Colombia's history. I recommend it and beside is the tranquil park - Parque Independencia.


View all photos in the Bogota Photoset

Hotel Dann, Bogota, Colombia (November 2014 - 4 nights, Oct/Nov 2020 - 48 nights, April 2021 - 3 nights) - Located in the very heart of Bogota city only a few blocks from Plaza Bolivar. The rooms are nice, have a TV and wifi plus bathroom. The included breakfast each morning is fantastic, an all you can eat buffet! I stayed on the 13th floor and had great city views. The staff are helpful and friendly. Hotel Dann is very well-priced for it's location and services. In 2020 I stayed here for 48 nights (yes forty-eight) during an extended time in Bogota. My room was cleaned regularly and it was very comfortable. You can get a special price for 5 nights or even a month. Recommended.

Residencias Teresitas, Bogota, Colombia (October 2020 - 1 night) - When your bed is so uncomfortable, so sunken and with a loose bottom sheet that moves around with your body and becomes a crinkled mess. It doesn't matter if the hotel has wifi, tv, a private bathroom, hot water, a good location, friendly staff, a desk and chair, good security and is good value at $19USD per night because you can't get a good nights sleep! I did have the intention of staying here a week or 2 but I couldn't stay another night in that huge sunken bed with horrible rough pillows. I went to the Dann Hotel instead, woohoo!

Hotel El Dorado, Bogota, Colombia (September 2020 - 10 nights, January 2021 - 1 night) - Hotel El Dorado located in La Candelaria area in the center of Bogota really needs to be gutted and rebuilt. With old creaky wooden floors, rooms and doors it's like being back in the 1800's. The location is great with restaurants and food in the streets outside and the center of the city all around you. The price for 1 person is $18USD and for 2 people $23USD more or less. Don't take the rooms on the 1st floor at the front with the balconies above the fried chicken shop, each day between 5pm and 10pm your room will stink of cooking oil and fried chicken. Private bathroom in the rooms and good hot water but doesn't last that long. The staff are friendly and the hotel has protocols for coronavirus (Covid-19).

Hotel City Express Junior, Bogota, Colombia (September 2017 - 1 night) - A group of us were put up at this hotel for 6hrs by LATAM Airlines after our flight was delayed so we didn't pay a cent. However, I did see the prices at reception and it is $200 pesos ($65USD) for a night to stay here. It looks and feels like a flash hotel but the beds weren't that great, not mine anyway. Worst part was that we got a free meal because they put dinner on each night. Unfortunately typically for Colombia the food was terrible, the chef was not hotel standard at all! The rooms all had private bathrooms, tvs and wifi etc, but I'm sure for this price there are better places to stay in Bogota!

Casablanca 98 Hotel, Bogota, Colombia (September 2017 - 1 night) - Just 3kms from Bogota International Airport and just $5 in an Uber taxi from the airport to the hotel! Good location if you need a cheap bed near the airport for a night. Comfortable room and friendly staff. $14USD for a private room with bathroom. Located in Fontebon.

Chia Xue Hostel, Bogota, Colombia (December 2014 - 4 nights) - Chia Xue is a brand new hostel in the Chapinero neighborhood of Bogota. I stayed in a very nice private room on the top floor. The dorms have semi-double beds, the widest beds I have ever seen in a hostel! Everything here is new and in excellent condition. The kitchen is well-equiped for cooking meals. There's a free breakfast each morning and the staff are very helpful and friendly. The bathrooms are shared and the water is hot. The top floor has a TV room and a ping-pong table. Recommended. 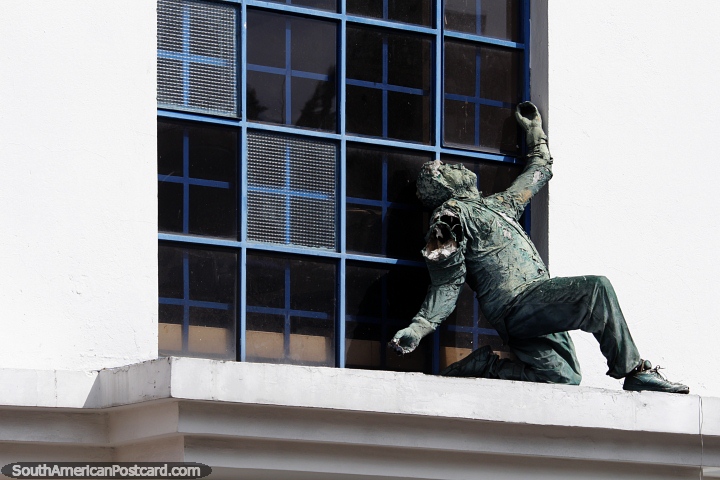