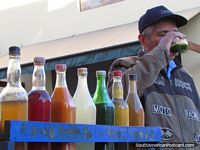 Colored hot drinks in Cajabamba at the days end. 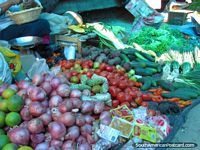 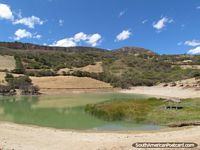 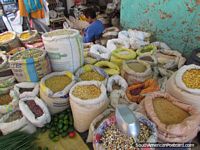 I travelled on a beautiful day from Cajamarca to Cajabamba, it takes 3hrs 30mins for the 125km journey. I enjoyed very much the countryside and landscapes along the way - red rock mountain sides, pastures and farmland. We passed through the small towns of Namora and San Marcos before arriving in Cajabamba where I spent the next 2 nights. Cajabamba has a varied climate and sits at an altitude of 2635m above sea level, it's cool in the highlands, warm in valleys and mild in between. I stayed in a cheap hotel in the center of town along the main (carless) walkway between the plaza and the markets.

There were not any other tourists here, nor is there any tourist office. But there are things to do and see around Cajabamba including some archaeology. I went for a walk to try and find something called La Pena del Olvido which translates to The Rock of Oblivion. It is a bunch of rocks near the edge of a cliff overlooking Condebamba Valley, the cliff is 80m and I believe some tourists have actually been killed falling off the edge. I did find this place, the rocks themselves are quite ugly with graffiti but the view of the valley and river is nice. I visited by taxi one of the lagoons called Laguna Ponte, it's quite near the city, 15mins drive. It's a nice place, very peaceful, surrounded by hills and farmland, you can rent a pedal boat to cruise around if you like. Other lagoons around Cajabamba are called Yahuarcocha - 2 to 3 hours walk (you need a guide for safety), Quengococha - 1hr by road, Ushunday - 30mins by road and Chan - 1hr walk.

Other attractions in Cajabamba include Los Ojos de Lanla (The Eyes of Lanla) - crystal springs, 2kms west of the city. 20mins walk from the city are some hotsprings called Aguas Termales, located in Condebamba Valley. The waterfalls, Las Cascadas de Coche Corral, has over 1000 steps in calcareous rocks in the colors of red and white. Pools, Pozas del Chivato Huayco - successive falls of water, comprising seven overlapping pools amid a natural landscape of extraordinary beauty. La Pampa Grande, beautiful plain 2.5kms from the city with farms and eucalyptus forests. Sites of archaeological importance around Cajabamba include Campanorco - a ceremonial place with passages, ramps and walls. Another is Marcamachay - a town of caves and ceremonial burials.

The city of Cajabamba itself is quite a laidback place, it's not a huge town, opposite the plaza is a nice white and yellow church with 2 belltowers. The markets are a good place to buy cheap produce and to watch the street activity. I walked past the college where outside is a monument of Leoncio Martinez Vereau (1886-1963), he was a Peruvian navy officer and politician of Cajabamba. Up the road away from the central streets I found Plaza Bolivar which has a gold monument and an overbridge with views around the city. A woman on the footpath had several bags of live guinea pigs and a van had a couple of poor sheep tied to the roof. Other animals like chickens and ducks were for sale on the sidewalks around town. The locals of Cajabamba seem like an easygoing bunch of people and were happy to help me with directions and any other questions I had.

After my stay in Cajabamba I took a bus south to Huamachuco, which took 2hrs.


View all photos in the Cajabamba Photoset

Hospedaje Gloriabamba, Cajabamba, Peru (August 2011 - 2 nights) - A small basic and cheap room with a shared bathroom. The place is located right in the center around shops, the market and plaza. It was fine here for a couple of nights. The family owners were nice.
Peru Travel Blog | Photos of Peru | Festivals in Peru | South America Videos 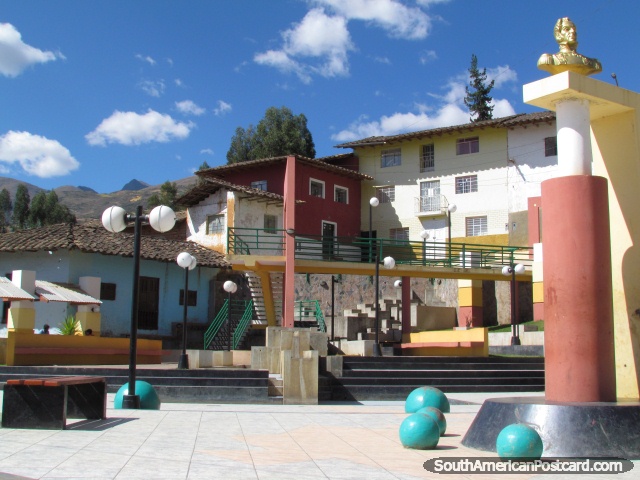