I left Nazca in the early afternoon up to Ica and at the bus terminal hopped on a bus to Chincha Alta arriving in the late afternoon. This was the next place I had decided to stay on my 4 day dash up the coast of Peru from south to north. From Nazca to Chincha Alta is 248kms and it takes 4hrs 30mins by bus. Before Nazca I had come from Moquegua during the night. I had already seen Ica and Pisco the year before and wanted to get close to Lima but not stay in Lima so I could pass through and head north the next day.

Out of Nazca in the bus and out onto the desert highway 25kms south of Palpa, 117kms south of Ica and 420kms south of Lima, we passed the museum Museo Maria Reiche, she is the woman who studied the Nazca Lines. The scenery along this stretch of highway is fairly uninteresting - lots of dust, rock and windswept shack houses on hills. We drove through dry land and farms and arrive in Palpa, there is not much there - a hostel, shops and restaurants. While the bus was stopped for a few minutes the locals sold the passengers pork rolls and drinks from outside the windows of the bus. After 5 minutes we were out on the highway again with about 90kms to go to get to Ica. 5 minutes from Palpa through the rugged terrain we came to a small village called Sacramento and pass through. We climbed up the hill a bit which opened up views into the valley between the rock hills that surround the area to see fields of crops growing in the green valley below. A gold monument looks like a man with a plow as I pass by in the bus. We travel along in the valley for a while and then wind up the road and hill through the rocky terrain which had now become very spectacular to see from the bus window. We pass a small yellow church or rather a large shrine with a blue cross at the top, it has colored ribbons attached to red poles outside. Locals sit in a bus shelter waiting for their bus, behind them the rock hills are becoming more of a darker color with black at the tops of them. On the side of the road on the sand and gravel is a shrine and a cemetery nearby with a little blue chapel called Virgen de Bendicemos. Shacks that people have made for themselves are built out on the desert highway roadsides in flat areas, which is where I now was. It's a wide open flat area of desert with shacks made of very light materials spread out on the sand, these things get hammered by the wind and destroyed by it also. I see a taxi parked outside one as we drive by. There's rubbish scattered around as we pass through a village, not much here apart from houses, farms, a tall yellow church, watertowers and livestock. We go past more desert shacks and a few minutes later go through another small settlement. There is a painting on a wall of Dr. Sebastian Barranca, he was a prominent scientist, naturalist and teacher. Next out onto the open road for the last part of the journey to Ica past fields of crops and mountains in the distance.

15 minutes later the bus pulled into the center of Ica down the hectic main street where there are small yellow taxis and red mototaxis buzzing around everywhere. You can see the big cathedral on the right as you come down this road. The bus terminal in Ica is also right here on this road in view of the cathedral. I bought a ticket for another bus up to Chincha Alta and got some food from the places outside the terminal. After 20 minutes on the bus we came to a toll gate, the distances from here are Paracas 30kms, Pisco 44kms, Chincha Alta 79kms, Canete 133kms, Mala 191kms and Lima 276kms. Between this point and Pozo Santo and up to the turnoff for Paracas (5kms) there is not much of interest as far as the scenery goes. 10 minutes later is the turnoff for Pisco while to the right is Villa Tupac Amaru 4kms away. There are some old Inca ruins. Passing now through San Clemente village and seeing signs pointing to Humay, Huaytara and Ayacucho. For the next 30 minutes until arriving in Chincha Alta I saw a lot of random things in the desert terrain - shrines on the side of the road, windswept shacks, the turnoff to El Carmen, a soccer match, fields, farms, ramshackle, tyreshops and more shrines. We were now in the outskirts of Chincha, not terribly attractive at this stage, actually pretty rough and shambolic. Ouside the bus terminal is a strip of shops and stalls selling liquor, food, ceviche (fish), rice with chicken and soup. There is a bunch of hotels and hostels along here. I checked out a few and settled for one of the cheaper but good options a few doors from the busy bus terminal, it was late afternoon by this time. That evening I took a taxi ride around town and did a few things and had a nights sleep. In the morning I went to find some soup. I found some but it wasn't good. Across the road from the terminal I booked a bus with a company for a ride up to Lima leaving at around 12pm, where after I would continue straight on to the north through Chiclayo throughout the night and end up in Piura by the next day.


View all photos in the Nazca to Chincha Alta Photoset


My Hostel & Hotel Reviews for Nazca to Chincha Alta, Peru:

Fred's Hostal, Chincha Alta, Peru (May 2010 - 1 night, June 2012 - 1 night) - Quite a nice room on the 2nd floor with a big bathroom, the room was big and had a window out onto the main street, it is just a few doors from the bus terminal. The wifi worked at first but stopped working for the rest of the time. I stayed here again in 2012 and had better luck with the wifi, a good option. Recommended.
Peru Travel Blog | Photos of Peru | Festivals in Peru | South America Videos 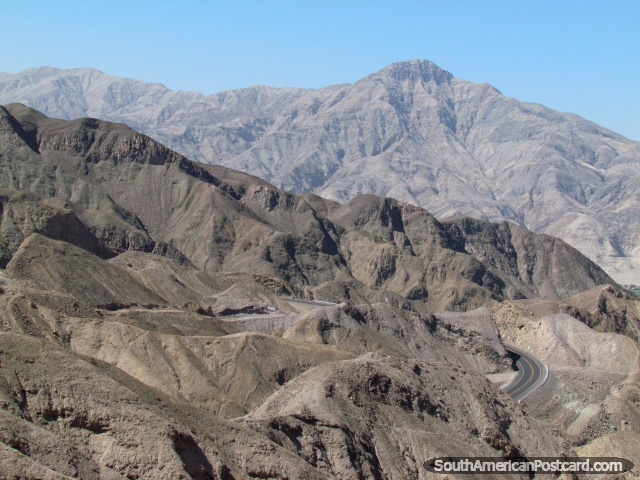