The journey from San Ignacio to Chachapoyas takes most of the day, 7hrs and 30mins in total. The first 3hrs to Jaen, another 1hr 30mins to Bagua Grande and another 3hrs to reach Chachapoyas. It is a nice trip through low-altitude forest and jungle regions where crop fields are separated by rows of palm trees.

The road is unpaved on the first leg and runs along-side the river. We passed through little places called San Jose de Lourdes and Chuchuhuasi before getting to Perico where the road improves and becomes sealed. Jaen is still another 55kms away. I start to see some rice fields and locals working in them. Some interesting mountain ranges create the backdrop. We cross the bridge over the river at Tamborapa a short while later and pass through Santa Elena, Shumba, San Agustin, Shanango and La Granja where again there are many beautiful green rice fields.

We now arrive at the dusty and shabby bus terminal in Jaen and take a mototaxi 5mins up the road to the other terminal where the mode of transport to Bagua Grande would be by co-op taxi-van, same as the first leg. Within 30mins we come to the intersection at Chamaya where the road splits, one way leads to Chiclayo on the coast, the other inland to Chachapoyas and Tarapoto. From here to Bagua Grande is 49kms, Rioja 284kms, Moyobamba 351kms and Tarapoto 453kms. In the seats in front of me are 2 gorgeous baby girls both fascinated with possibly my face and the camera I was pointing at them. The journey continues beside the river on a good road with beautiful green fields and hills surrounding, we cross the big bridge and are officially in the Amazonas region of Peru. With 20kms until Bagua Grande the road becomes long, straight and hazy, cactus start to appear and there are farms and rice fields.

Change to a Bus in Bagua Grande

In Bagua Grande, I took a mototaxi from where I was dropped off to the bus terminal and bought a ticket to Chachapoyas. I waited an hour at the terminal where I enjoyed some soup at the soup kitchen outside on the street, then we left. Unfortunately the windows of the bus were a little filthy but it's a spectacular ride with some wonderful river and mountain scenery. If you understand Spanish, here is the government website of Jaen and Bagua news.


View all photos in the San Ignacio to Chachapoyas Photoset 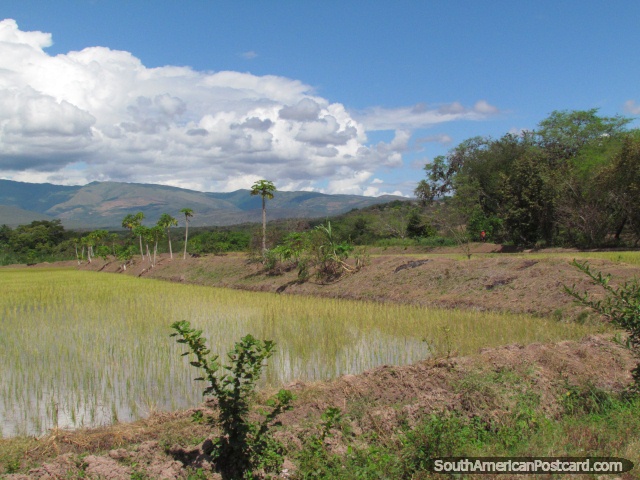