Spider-like creatures sculpted in the walls of a pit at the Moche city in Trujillo. 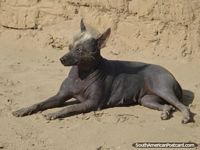 Archaeology in Trujillo at the old Moche Temple, sculpted faces on the walls.

In Trujillo and nearby Huanchaco there is a lot to see and do. Trujillo has a fantastic historical center with at least a dozen notable churches worth checking out. Trujillo's main square - the Plaza de Armas is quite spectacular to see with colorful buildings surrounding it, the cathedral and flower gardens. In Huanchaco, although I was not here in peak season I enjoyed the laid back and relaxed atmosphere for a couple of nights while spending a day visiting some of the archaeological sights in Trujillo and nearby Chan Chan. I was also interested to see the famous banana boats that the locals use for fishing plus the beach and some surfing.

In Huanchaco there is a lot of accommodation in various price ranges available with the beach front hotels and hostels being the most expensive. I found a great place to stay on a street off the main beachfront road for $25 Soles per night for my own room with bathroom which is a great deal. There was also free internet available and a laundry nearby called Mr Phil.

The Main Street and Beachfront

The main street on the beachfront is pleasant with its palm trees and gardens and a few statues and monuments. There is a long pier which costs 50 cents to walk out onto during the day. The locals fish and people sell hooks, lines and sinkers. There are several restaurants and eating places on both sides of the road. Also a nice cake shop across the road from the beach at the southern end. There are places around town that rent surfboards and there are people available to teach you to surf as well.

Huanchaco has a local hospital with nice staff should you need it. You can visit a doctor here and get a prescription too. It is quite cheap, about $6 Soles to see the doctor!

If it had been a bit warmer I would have tried some surfing but I did enjoy watching a few others out on the water, the waves looked pretty good. On the beaches Playa El Varadero and Playa La Curya is where all the banana boats are, dozens of them. The locals were busy attaching green fishing nets to them. On the roadside above there were a couple of men selling something orange made with honey, there were bees still buzzing around and on it. A man rode past on a bicycle carrying a big load of the totora reed raw material used to make the banana boats. There was a man and woman out on a banana boat, one paddling and one fishing. From the pier I took a photo of the church up on the hill at the back with the beach, boats and water in the foreground. At night it looks really nice when they turn the lights on inside.

A good restaurant that I enjoyed in Huanchaco is El Velero Food and Drinks, they serve a nice fish meal (Ceviche).

I met 3 other travelers at my hostel in Huanchaco and we decided to organise a taxi for the afternoon to take us to the temple of the moon known as Huaca de la Luna and the temple of the sun known as Huaca del Sol. There was 4 of us so we had more bargaining power with the taxi. My friends knew a guy already and he agreed to take us there and wait for us and then bring us back to Huanchaco for $50 Soles total. A good deal for 4 people. So we set off, it took about 30 minutes to get there.

We first stopped at Huaca del Sol which is near the entrance. We saw the corner walls of big stone bricks and the driver explained some of the history behind it. It was much more interesting however to see Proyecto Arqueologico Huaca de la Luna which is an ongoing project which was started I believe in the early 1990's. This is a living breathing arqueology site where more is uncovered each day. After we bought our tickets for $11 Soles each, we waited about 15 minutes for our guide to take us through. The groups of people are spaced out by 10-15 minutes to avoid creating crowds on the fragile site. While we were waiting we saw all the arqueologists walking down to take a break with their picks, spades and tools in their hands, our guide took us out. She was really good at explaining the details of the temple to us, she has been a guide there ever since it opened to the public.

City of the Moche

The city of the Moche civilization is in an amazing setting at the foot of Cerro Blanco mountain on the south side of the Moche valley. The location was chosen so that the inhabitants had access to the valley's largest expanses of farmland. The farmlands were won from the desert and were watered by a complex and extensive irrigation system which allowed the Moche to sustain an agricultural economy capable of generating surpluses! The city produced its goods from these farmlands and created exchange networks to provide the city with prestige goods that were carried in on llama caravans. Most of the projects workers come from the Moche valley's traditional countryside. The team includes renowned archaeologists, conservators, architects, engineers, anthropologists, biologists, artists, technicians and assistants. Here is the website for the project called Patronato Huacas Del Valle De Moche which is available in English and Spanish.

We met the projects pet Peruvian Hairless Dog along the way. Their body temperature is higher than other dog breeds, they look kinda funny.

There is a lot of scaffolding with roofing to protect the areas of excavation from the wind and elements. Walls, rooms and staircases have been excavated. Some walls still have the Moche paintings on them in mainly red, yellow, white and black colors. These walls portray the image of the Moche God Ai Apaec. There are other walls with quite detailed drawings on them and a whole row of people holding hands as well as some serpents. The temple has many layers. The Moche used to bury earlier constructions under adobe bricks and superimpose new structures over them. The researchers have discovered 5 distinct building periods. The whole area of excavation work being done here is incredible, we were told by our guide to come back in 3 years to see whole new sections that will be uncovered. My friends and I found it to be a very interesting experience and enjoyed the time we had going back in time to the Moche era.

Organise a Tour to Chan Chan

After the taxi took us back to the hostel in Huanchaco we organised with the driver for him to pick us up at 10am the next morning to take us to Chan Chan also known as Palacio Tschudi which is near to Huanchaco and other sites called Huaca El Dragon and Huaca La Esmeralda and also to the museum called Museo De Sitio Chan Chan. These 4 sites are all able to be visited on the 1 ticket, which cost $11 Soles. We set off, on the way we passed a remote church called Iglesia San Jose and a minute later came to the entrance to Chan Chan.

As we approached we could see the outside walls with their jagged but round edges and all at various heights, it all looked a bit like the surface of the moon. We firstly saw some diagrams and maps about the site and what it used to look like and began our walk through. There were guides available for an extra cost but we decided to guide ourselves and use the information boards along the way to learn about it. The first site was the grand square area that has 2 wooden statues guarding the entrance, there was a local school group visiting with their teachers while we were here. Behind the statues are the walls with carved patterns of animals, inside there are walls carved in a diagonal checkered pattern. This diagonal checkered pattern became a theme as we continued walking through. We stuck by the school group for a while so to get some additional information from the teacher talking to the kids which a girl in our group translated to the rest of us. The walls and stone at Chan Chan are very rounded and smooth - I presumed because of the wind blowing over the site for thousands of years, but it is actually mainly the rain. We walked along long corridors and through little doorways. We saw an impressive well which was the setting for ceremonies dedicated to a water and fertility cult. Chan Chan built by the Chimu civilization is interesting to explore, the shapes, textures and designs of the walls give the site a nice smooth relaxing feel, without too many sharp corners.

We were at Chan Chan for just over an hour and then we drove to the museum Museo De Sitio Chan Chan. Inside the entrance there is a life-size model of the Chimu King being carried in his chair by 4 servants. There is a board showing the chronological order of the civilizations going from the Guanape, Cupisnique, Salinar, Gallinazo, Moche and Chimu to the Inca. There are various artifacts in glass cabinets to look at including metal goods and wooden moulds. There's a big model of Chan Chan which shows the whole city. There are wall displays showing various things including one showing how the banana (totara reed) boats are made and explaining their origin.

Next we visited the site called Huaca Arco Iris o Dragon which is a small site with just the temple. We found the entrance to the temple around the back which is a big stone wall doorway. We walked up the stone corridor and came to walls with some designs carved into them and a steep ramp leading up to the top floor or roof. We hung out up here for a few minutes looking at the views of the surrounding Trujillo area. The driver said that the other temple was very similar, so we decided that we didn't need to go there and could he drop us at the bus terminal.

Bus to Chiclayo or Piura

We wanted to head up the coast to Chiclayo and Mancora. We had brought our backpacks with us. We paid the taxi 30 Soles for his services for the day which overall took about 3hrs. We arrived at Trujillo bus terminal, one person went to Chiclayo to see more arqueology such as 'Sipan' and the other 3 of us headed for Mancora via Piura.


View all photos in the Huanchaco / Trujillo Photoset

Pompeya Hostal and Suites, Trujillo, Peru (August 2021 - 3 nights) - The only reason I stayed here is because the hotels more central in Trujillo I didn't like because of cost or there was no window. At $50 soles per night Pompeya Hostal and Suites is half the price and only just across the road from the central part of the city. The room is small with a bed, tv, wifi, balcony and private bathroom. It is more of a rent by the hour kind of place and the bed had bugs biting me. Not recommended unless you really want to stay here!

Plazza's Hotel, Huanchaco, Peru (Jun 2009 - 2 nights) - A great room at a great price, 25 soles, has 3 computers for free use, you can rent surfboards downstairs and it's close to the beach.
Chan Chan Inn, Trujillo, Peru (Jun 2009 - 1 night) - Basic and not very nice room, the bed was thin and uncomfortable and I was covered in bug bites in the morning, not recommended.
Peru Travel Blog | Photos of Peru | Festivals in Peru | South America Videos 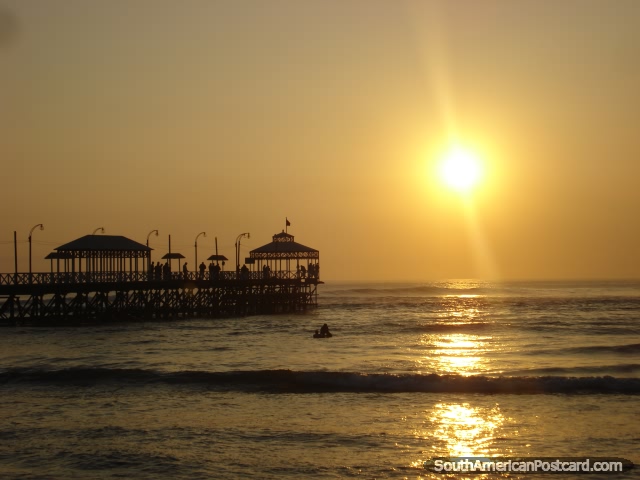