Huacachina / Ica, Peru - Sandboarding The Sand Dunes In An Oasis

At the end of the day, sand all around at Huacachina. 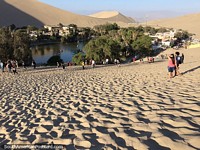 A sandy playground that everybody loves at Huacachina.

Restaurant with tables outside beside the water in Huacachina.

Not the moon, this is Huacachina and Ica, sand dune land.
Map location: Huacachina, Peru

I travelled from Pisco to Ica by bus and took a short taxi ride to Huacachina to stay by the oasis and go sandboarding on the huge sand dunes. I found a great hostel with a pool and bar and outside area with a bunch of macaw as pets that sat and flew around the garden. It had a restuarant that makes great breakfasts and other food. The oasis surrounded by palm trees and enclosed in huge sand dunes at Huacachina is a magical place to spend a couple of nights. There are good restaurants here and you can hire small pedal boats to cruise around the lagoon.

The next day I paid about 50 Soles to go sandboarding for a few hours in a group of about 6. We headed up the dunes in these sand buggies at about 9am before it got too hot, the journey up was a very bouncy and breezy ride. It's a good idea to keep your camera in a plastic bag when around the sand. The mass of sand here is hard to comprehend, mountains and mountains of it for miles. It pays to wear some shoes up here for the sandboarding so that the board is secure to your feet. Flip-flops can easily break and the temperature of the sand is too hot for unprotected feet. I hadn't ever been on a board before. I have snow and water skied a lot but boards were new to me. It was fun but hard to stay upright for long as the sand is very heavy, but with various degrees of success people in the group got down the slopes one way or another. We progressed to some giant slopes that were seriously steep. Most people opting to go down on their stomachs for maximum speed, including myself. It was the most fun thing all day, that last ride. While going from slope to slope in the buggy, we had amazing rides up and down the sides of sand dunes and canyons. The 9 seat buggies are so small when you see them with a huge mountain of sand behind them. We viewed another oasis surrounded by dunes and wondered how such a thing can exist and why the sand doesn't blow into the oasis and fill it up.

Relax with a Drink and Pizza

After several exhilarating rides down some very steep and long slopes I was ready to head back to swim in the pool at my hostel at Huacachina and have a nice cold drink at the bar. That night I enjoyed eating great pizza at a local restaurant by the oasis. Everyone who was hanging out at Huacachina was happy and in good spirits, its a relaxing place.

Next morning it was time to head to Ica for some quick shopping, lunch and to get a bus to Nazca. I had a look around a few shops and bought an 8GB flash drive for 79 Soles. I spent some time in the main plaza and had chicken foot soup for lunch and walked a few blocks to the bus terminal. Beside the bus terminal a man was selling pacay or ice cream beans as they are known, they look like giant green beans, sometimes as long as half your arm. You open them up and there is a white cotton wool like substance containing a big black bean. You eat the white wooly stuff but not the bean, they are so refreshing!


View all photos in the Huacachina / Ica Photoset

Hospedaje H. Juniors, Ica, Peru (September 2021 - half day) - Located a street behind the bus terminal in Ica this place is just a place to rest for a few hours between buses. Not flash and overpriced if it really is $50 soles (what I paid). I doubt that is the real price. Basic room with basic bed, bathroom, a patio and a window. Not a place to stay for more than a few hours, not even a night.

Hospedaje Mayo, Huacachina, Peru (September 2021 - 1 night) - $100 soles doesn't buy you great accommodation in Huacachina. Hospedaje Mayo was OK for a night though and the water was hot. A basic room with window, adequate bed, bathroom etc. Spend $150 soles in Huacachina for something much better or stay in Ica instead for cheaper options.

Hostal Rocha, Huacachina, Peru (Apr 2009 - 2 nights) - Nice rooms with views, great garden area with swimming pool, bar and food to order. There are hammocks under trees to lay in and friendly big parrot birds live in the garden area, it's easy to organise a sandboarding excursion from here.
Peru Travel Blog | Photos of Peru | Festivals in Peru | South America Videos 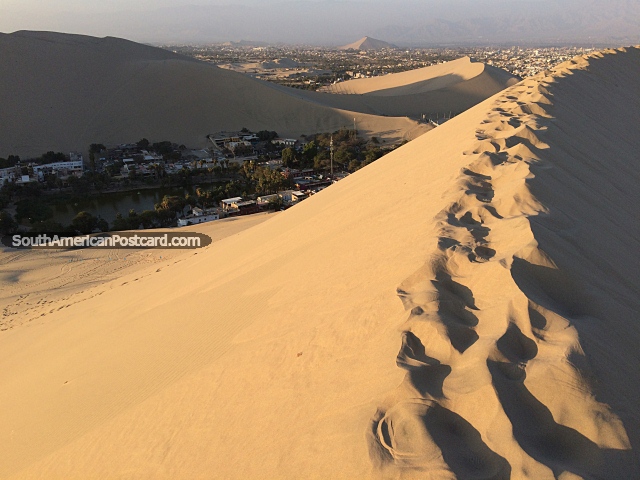