Lady with flowers and a large urn, colorful mural in Ayacucho.

Indigenous girl eats a plate of food, large mural at the central cultural building in Ayacucho.

Couples in love with each other and music, painted figures at the arts center, Ayacucho.
Map location: Ayacucho, Peru

Ayacucho is definitely the most underrated and undervisited city by tourists and backpackers in Peru. I had come to Ayacucho on an 8hr bus from Huancayo through some amazing terrains and landscapes.

40 minutes out of Huancayo the distance to Ayacucho is 223kms, Huancavelica 111kms and Izcuchaca 33kms, during this time we passed through Huancan with its pretty plaza and church and 2 other small churches in the countryside. We soon came to a place called Nahuinpuquio where you can hike to the lagoon and see some archeological ruins, there is a huge market 10mins along the road. The next part of the journey was nice as we headed along a road on a ridge around the hills to Casma where there are some hotsprings known as Aguas Calientes. Down in the valley with the river on my right, arriving a few minutes later in the little town of Izcuchaca, a very picturesque scene indeed, an arched stone bridge across the river to a lovely bunch of houses and a big rocky and green mountain behind. We continued along beside the river. Half an hour later we came to a small town and a railway station, a small blue church sits on the hill. 40mins later on the right side is a river dam and the Quichuas army base and town with its pink church. A while earlier the road had turned to gravel and continued this way as we followed the river on a ledge 30-40m above. By the middle of the day we were in Esmeralda, a very small town with a soccer pitch beside a huge hill. The valley was becoming quite tropical and green, many palms and other trees, the waters of the river were a rich turquoise color as we ascended back into the red rocky mountains. There are some great photo opportunities out to the right looking down at this scene once at the top. Half an hour or so later we passed a series of Stonehenge-like rock formations in the next valley. We crossed the river and drove by a papaya plantation. A while on we arrived in Huanta, a small town with a pastel colored church, we made a stop for ice-creams.

Within an hour we arrived in Ayacucho, a welcoming sign above the road said "Ayacucho es Magico" - Ayacucho is Magic. I would understand why in the morning. Ayacucho is known as the city of churches, there are over 30 churches scattered around the city. I got the feeling I was in Quito - Ecuador (a city with many churches).

Taxi Tour of Churches and the City

I didn't have a lot of time. I wanted to see as much as possible before moving on, the next day. At 5am in the morning I arose and got organised. At 6am I hired a taxi to give me a 90min tour around the city, taking me to as many churches and other places as possible. We agreed on a price of 30 Soles ($10USD). Like all good city tours we started at the Plaza de Armas and stone Cathedral. We visited next Church San Francisco de Paula (1713) - a yellow / white color, quite impressive. Next, the grey-stone church Santa Clara (1568) constructed from stone extracted from the mines. We passed a big orangey pink archway on our way to the next church San Francisco de Asis (1552), then onto see church Santa Teresa built in 1703. We travelled up the hill to see some views of the city from the mirador. The hills glistened in the golden morning sun, there are several monuments and things up here like a big white cross, archways, Jesus statue and eagle monument. Back down to the center and past the markets to see fresh fish on ice being sold in the street. The next church I was taken to was church Santa Ana founded in 1569, we then wizzed by a park and Mercado Santa Clara before arriving at Templo El Calvario, a simple white church. We visited now church Santo Domingo contructed in 1548, it looks a bit like a fortress and then church Santa Maria Magdalena (1588). A plaza and monument to Andres Avelino Caceres (1836-1923), a national hero and 3 times President of Peru was the next sight. It was time to thank the taxi driver for a great tour and continue on foot. I visited Plaza Maria Parado de Bellido (1761-1822), a heroin of Peru's independence. Standing is a monument to her and a small white church called Arco. I loved what I saw in Ayacucho and will return again in the future, there is much more to see.

I spent the rest of the day, 8hrs 30mins on a bus to visit the famous Sunday markets in Andahuaylas.


View all photos in the Ayacucho Photoset

Hotel Colmena, Ayacucho, Peru (September 2021 - 3 nights) - A large and fantastic room for $110 soles per night, almost as big as a small apartment. Huge bed, comfortable furniture with chairs and tables, a fridge, large tv, wifi, bathroom and breakfast included. Located in the center of the city half a block from the main square. Friendly staff and relaxed atmosphere. A good place to stay while in Ayacucho. Recommended. 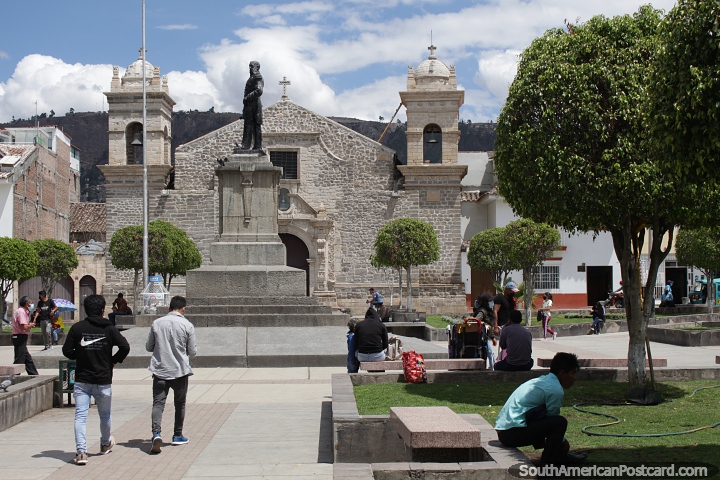