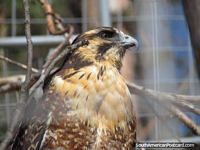 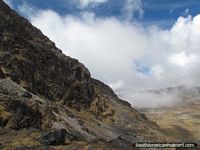 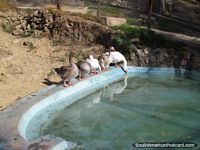 Geese drink at the pool at Huancayo Zoo. 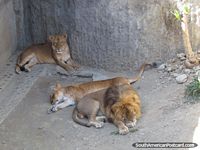 I came to Lima from Huaraz to get to Huancayo. I made my way by taxi to the bus at Terminal Terrestre in Lima and bought a ticket for around $30 Soles ($10USD), it would be an 8hr trip. The first hour of the trip was through the smog climbing up and out of Lima, gradually the sky became clear and blue and the air cleaner.

When you come to the Corcona toll gates Huancayo is 250kms away, Tarma 182kms and La Oroya 126kms. It's an amazing terrain of huge rocky mountains. A few hours into the trip we started to pass through many tunnels and cross several bridges over the river, the train tracks follow a similar path and cross above the road on bridges at several points. We passed through the town of San Mateo nested in the hills beside the river. It's a small place with a prominent yellow church. The road is sealed and not in bad condition. The next tunnel - Tunel Cacray, is 580m long. You now come to Chicla and a while later pass by the Morococha mines below a yellow peaked mountain, this road is busy with trucks. The ascent continues and 30mins after Chicla you are at over 5000m above sea in the snow! It was completely white outside and it was cold and wet as we passed through Santa Rosa de Sacco. Shortly afterwards we came to the town of La Oroya, this place has mines and the whole town is contaminated, luckily we didn't stop. Huancayo was still 125kms away and I eventually arrived at around 8pm and spent the night in a hotel near the bus terminal. In the morning I found a hostel in the city center a few minutes walk from the main plaza.

Beside the cathedral at Plaza Constitucion are a few tour companies offering tours of the city (2-3hrs), a circuit around the Valley of Mantaro visiting local artists, a milk plant and a lake (8hrs), the Historical / Archeological Circuit visiting sites like Chupaca, Lake Nahuinpuquio, Arwaturo, Campina, Cani Cruz, Warivilca and Pakarina (8hrs), the adventure circuit of Huaytapallana hiking up in the mountains (10hrs) and the Tarma Circuit of waterfalls and nature. I booked a tour for the next day to go hiking in the mountains of Huaytapallana and now made my own city tour starting right there at Plaza Constitucion.

Plaza Constitucion has fountains, gardens, a big archway and has cathedral Parroquia El Sagrario on one side. There's a monument to Ramon Castilla (1797-1867), he was 4 times the President of Peru and a leader of the independence. I could see the blue domes of church La Inmaculada in the distance. I walked in that direction and along the way found a park. Parque 15 de Junio is a quiet, relaxing place with an interesting central feature. I now came to the church and Parque Inmaculada, a nice area with many seats and a monument of the Virgen Inmaculada. The Huancayo railway station was closed. There's a monument of 2 men and an old steam train on display.

Zoo on the Hill

I had heard about a zoo in Huancayo and now took a walk towards Parque del Ajedrez at the end of Giraldez Street. The park entrance has a stone wall with a few large chess pieces outside and a big green monument behind it with a jungleman with a club at the top. The Huancayo Zoo is built on the side of a hill called Cerrito de la Libertad, the zoo was built between 2007 and 2010, it's 2 Soles (70cents) entrance fee. I saw animals such as snakes, jaguar, monkeys, condor, lions, tigers and bears on the walk up the hill. At the top of the hill is a park with beautiful gardens, flowers and church. There is also an old airplane on display and a few other monuments. You can buy a drink or a cup of jelly from locals up here. I re-entered the zoo again and walked down a different pathway and saw a few more animals, turtles, llamas, alpacas and many interesting birds - at least 20 species. I really enjoyed the zoo in Huancayo, I recommend it. You will see great views of the city while you are there.

At the markets is where you can find many great deals and prices on everything from flowers to meat and fish, vegetables and fruit, grains, nuts and all kinds of other goods. As usual I bought something to cook up on my hotplate in my room that night and some eggs to scramble in the morning before leaving on the day trip to Huaytapallana at 8:30am from the plaza.

Huaytapallana is 29kms from Huancayo but takes over 90mins to reach the arrival point. I estimate this point to be at just over 4000m because the first lagoon Laguna Carhuaccocha is at 4412m. The next lagoon up is Laguna Jatunccocha at 4597m and then Laguna Yanahucsha at 4775m, it is possible to make the 6km lagoon circuit by horseback. My 3 person (plus guide) group went for a walk to another lagoon called Laguna Lazuhuntay at 4647m. From the arrival point it is a hard 4km walk up steep hills to the point where you can have contact with the snow and be beside the lagoon. We didn't make it this far, we made it to the point where we could get some good views of the lagoon and snow. The walk was seriously tough at this kind of altitude and we were not experienced hikers and it was too late in the day for us to get there and safely get back. Towering above the point of contact with the snow at 5150m (if you get that far) are the great peaks - Pico Lazuhuntay at 5557m and Pico Yanahucsha at 5530m. After spending a while resting and admiring the vast views we headed back down to the arrival point and into the house and restaurant where the family is welcoming and you can order soup or a meal which we certainly did.

It was time to move on, next morning to Ayacucho, 9hrs by bus.


View all photos in the Huancayo Photoset

Hospedaje Aruba, Huancayo, Peru (August 2011 - 3 nights) - Cheap and basic place to stay in central Huancayo 2 blocks from the plaza. The bathroom was private but not flash. Secure, they unlock and lock the doors on entry and exit. Nice staff.
Peru Travel Blog | Photos of Peru | Festivals in Peru | South America Videos 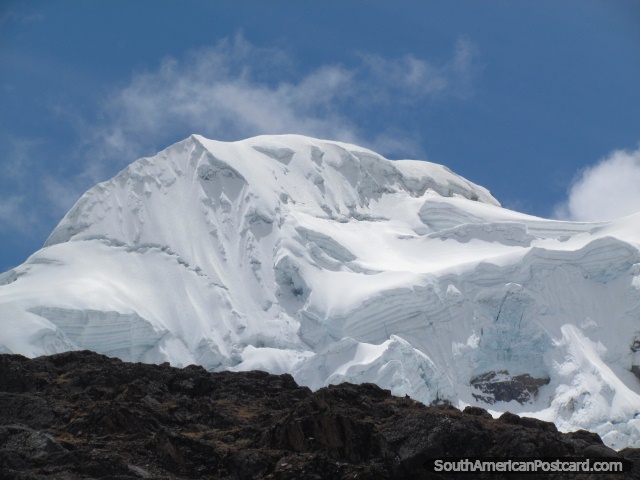