Kuelap had 550 structures, all circular except for 5 in the mountains around Chachapoyas. 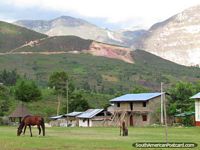 Hire a horse to ride to Gocta Falls from Cocachimba village near Chachapoyas.

Brown llama with white head in the rocky wilderness of Kuelap, Chachapoyas.

The walking trail that leads up to Kuelap ruins after the cable car, Chachapoyas.
Map location: Chachapoyas, Peru

I came to Chachapoyas from the north the first time and from Moyobamba the second time. It's one of the more isolated cities in northern Peru away from the coast up in the mountains 2235m above sea. Chachapoyas is home to the ancient civilization 'the People of the Clouds' who fought the Inca from Kuelap - the amazing fortress high up in the mountains.

I booked a tour to visit Gocta Waterfalls one day and to see Kuelap the next day. Gocta, I had heard was the 3rd tallest waterfall in the world, but it is actually the 14th most tallest. Gocta has only been known outside of local knowledge since the early 2000's. There are 2 methods to get there, walking for 2 and a half hours each way or by horse. My group and I were on foot, it was a hard walk with steep and winding paths in parts. It is possible to do some birdwatching and see birds like Cock of the Rock, Hummingbirds and Tucans if you are lucky! The locals charge 5 Soles for adults and 2.50 Soles for kids to enter the park, hiring a horse is around 20 Soles. If I had known how hard it was going to be I would have taken a horse at least some of the way, maybe shared it with another person, one way each. It was August, so Gocta was not at full power, but it was still impressive and some of us dared the freezing water and went swimming in the pool at the base of the waterfall, after a minute I was so numb I couldn't feel my body anymore, very refreshing. We walked back to Cocachimba village where some people in the group had lunch which they had payed for as part of the tour, then we drove an hour in the jeep back to Chachapoyas.

The next morning we meet again at the tour office and commenced the 2hr drive into the mountains to Kuelap. Kuelap was only accessible by a several day hike until a few years ago, now jeeps can get right up to within 25 minutes walk from the fortress walls. Once outside Chachapoyas the unsealed road winds around and up the hills and passes through several settlements and villages along the way - Choctamal, Longuita, Luya-Lamud, Maria and La Malca, the countryside is beautiful as we climb higher and higher until we reach Kuelap at 3000m. We pay for an entry ticket and walk up the path which has fossils embedded into the stone. Then we see the huge walls of Kuelap. Kuelap is huge, it's the biggest stone structure in all of South America, it's really amazing, the shear size of it! Kuelap has a length that stretches over half a kilometre and a width of over 100m, some of the walls are nearly 20m high, it contains around 450 buildings, although many structures have only the base remaining. Our guide was very passionate about the ruins and had great knowledge, he explained everything in both English and Spanish. Exploring the Kuelap ruins was so much fun and very free, I enjoyed it a lot more than Machu Picchu. I could take my time without having policemen blowing whistles in my face to move on. I enjoyed being at the very back of my group taking photos of things after they had moved on to the next thing. Compared to Machu Picchu, Kuelap was not crowded at all and it is also in an amazing setting of tropical cloud forest. If you are in northern coastal Peru, consider taking a bus inland from Trujillo or Chiclayo to Chachapoyas to see the incredible Kuelap, I really recommend it.

I stayed in the center of Chachapoyas just off the main plaza/park near the big white church. Around the plaza are restaurants, shops and tour companies. It's a nice area with trees, gardens and white buildings. There is a monument to Toribio Rodriguez de Mendoza (1750-1825), a Peruvian academic born in Chachapoyas. In a building off to the side of the plaza I found some military monuments in honour of the heroes of the War of the Pacific (1879) (Guerra del Pacifico), Sergeant Major Luis Beltran Torrejon Davila, Jose Santos Valdez and Pablo M. Pizarro Farje. Other things around Chachapoyas to see include the funerary sites of Karajia and Revash, the Mummy Museum in Leymebamba and the Lake of the Condors. From Chachapoyas I travelled 9hrs south/west to Celendin and continued a further 3hrs to Cajamarca, arriving early in the evening.


View all photos in the Chachapoyas Photoset

Hostal Plaza, Chachapoyas, Peru (August 2021 - 4 nights) - I found a much better bed at Hostal Plaza than the previous hotel in Chachapoyas. For $60 soles you can get a room with a balcony overlooking the central plaza. The rooms are old with creaky wooden floorboards but the rooms are big and spacious with some furniture. The bed was nice too. The problem however was that the walls are paper thin and my bed and the next room's bed were on the same wall. It was like having 2 other people with me in my bed, bad buzz. I had to move my bed to the other side of the room. If they could thicken the walls would be good.

Hotel Karajia, Chachapoyas, Peru (August 2021 - 2 nights) - Hotel Karajia in Chachapoyas at $50 soles for a private room for 1 person. Private bathroom, tv, wifi etc. But I didn't like the single bed. It was sunken and I hate being molded into the same position as the previous people who have slept in it. Located just 2 blocks from the central plaza. I stayed for 2 nights but just had to go and find a place with a big and better double bed.

Kuelap Hotel, Chachapoyas, Peru (August 2011 - 4 nights) - Located half a block from the central plaza. A very large room with tv and a shared bathroom. Outside the bedroom is a balcony. The price was good. Recommended.
Peru Travel Blog | Photos of Peru | Festivals in Peru | South America Videos 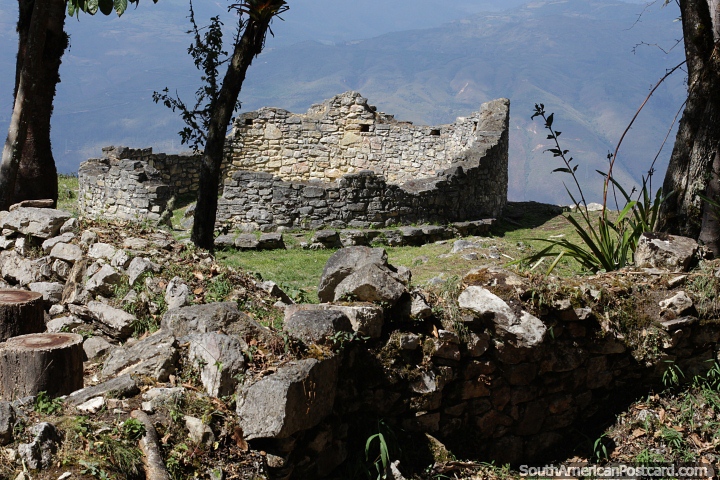