Pasto, Colombia - Named After The Barbacoan People Of Carchi Ecuador

Cristo Rey Temple in Pasto, great for keeping track of where you are in the city.

Super attractive building with symmetrical arches, doorways and balconies above shops in Pasto.

I have passed through or stayed in Pasto a few times. Arriving from both the north and south through amazing terrain from the border with Ecuador or Popayan northward. Pasto is actually named after the Barbacoan people across the border in northern Ecuador!

Hotels Near the Bus Terminal

Outside Pasto's bus terminal you can see quite a few hotels over towards the right - a few minutes walk away. Some of these hotels are cheap, ranging from $12000-$20000 pesos ($7USD-$11USD), others are better for a higher price.

From the bus terminal the center of town is straight ahead and towards the right slightly. Having been in Ecuador before I came here, it was very apparant I was in a different culture now. It was very exciting and very Colombian, completely different. The senior men dress in the finest suits. The women nearly all look like models, in fact better than models because they have natural beauty.

There is some wonderful architecture, churches, cathedrals and statues. There is a huge plaza in Pasto that is called Parque del Carnaval. It is an interesting shape, not the standard square with statue in the middle. It has a big archway at one end but it is not the main plaza. Obviously by its name it is used for the carnival and possibly concerts and political rallies.

Plaza Narino and the Cathedral

Plaza Narino has a statue of General Antonio Narino in the middle, he was an early political and military leader for independence in Colombia. The plaza is usually full of people sitting on benches and walking around. There are a couple of trees with each surrounded by shoeshine men dressed in blue underneath blue umbrellas. The plaza is surrounded by some interesting buildings and streets including the huge cathedral with amazing statues at the top and fine engraved designs on the arched doors. It has arched and round windows and twin bell towers, a must see! In this area is a statue of Gobernador de Narino Eduardo Zuniga Erazo and also you may see a row of typists with typewriters for hire in the street sitting at desks under umbrellas and also some interesting street art.

Pasto has some awesome churches. Some include La Merced, San Juan Bautista and Cristo Rey Temple. There is a statue of Atahualpa who was the last free-reigning emperor of the Incas, he lived in the early 1500's.

Visit the Blacks & Whites Carnival Museum while in Pasto to enjoy all the fantastic characters on display on the floor. The carnival is held from the 2nd to the 7th of January each year.

Pasto is set in a beautiful valley and has lovely green hills surrounding it, the city is quite clean and has a sense of authenticity about it - the people, the food and the historic center. I well recommend spending a day having a look around.

I had read about not doing this journey at night because of bandits and robberies. I asked at Pasto's bus terminal about this and was told it was safer now, there were more police on the road between Pasto and Popayan.


View all photos in the Pasto Photoset

Hotel Confort Sweet, Pasto, Colombia (January 2021 - 2 nights) - Hotel Confort Sweet in Pasto was a great find for me and quite luxurious with a very large room with firstly a balcony, a jacuzzi, a sofa, a large bed, glass coffee table, nice bathroom, tv and wifi. Great value at around $27USD for 1 person. Stay in luxury in Pasto at Hotel Confort Sweet, not far from Hotel Niko and the bus terminal. Highly recommended and a great discovery in Pasto!

Hotel Cabañas Rio Mayo, Pasto, Colombia (September 2020 - 1 night) - An extra night in Pasto I was not expecting brought me to Hotel Cabañas Rio Mayo beside the airport. I had booked a flight with EasyFly online, they sent reservation number etc. But payment was not easy. My understanding was I could pay at the airport. They don't accept foriegn cards nor accept cash at the airport. The only easy thing about it was to book a flight with Avianca for the next day! So the hotel, yes very comfortable room for around $20USD with bathroom, tv, hot water and fridge. There is also a restaurant and shop. The hotel has nice gardens and outdoor areas. Just 20 seconds walk from the airport entrance. Recommended.

Hotel Super Estrella, Pasto, Colombia (September 2020 - 1 night) - A dive beside the bus terminal in Pasto for around $8USD. Itchy bed and not comfortable. Private bathroom, a window out to the road, view of the terminal. Just pay $5USD or so more and get a nice hotel across the road. Don't come here - I don't know why I did - close to taxis to get to the airport early the next morning, that's why.

Hotel Niko, Pasto, Colombia (September 2020 - 2 nights) - Located across the road from the Pasto bus terminal, Hotel Niko is the tall green building over on the right. It's very comfortable and has a good price of around $13USD. The bed was super firm with clean and new sheets. Hot water, tv, wifi and a view if you have a room near the top floor. Very secure which is what you need in a hotel in Pasto. Some hotels you can't trust. Hotel Niko is a great choice for your stay in Pasto unless you want to be in the very center of the city. Recommended.

Hotel Hilton, Pasto, Colombia (June 2010 - Half a night) - Just because a hotel is called Hilton does not mean quality. In fact this is the worst place I have ever stayed, the sheets were not clean and they smelled and they run it as a rent by the hour hotel. Do not stay here ever.
Colombia Travel Blog | Photos of Colombia | Festivals in Colombia | South America Videos 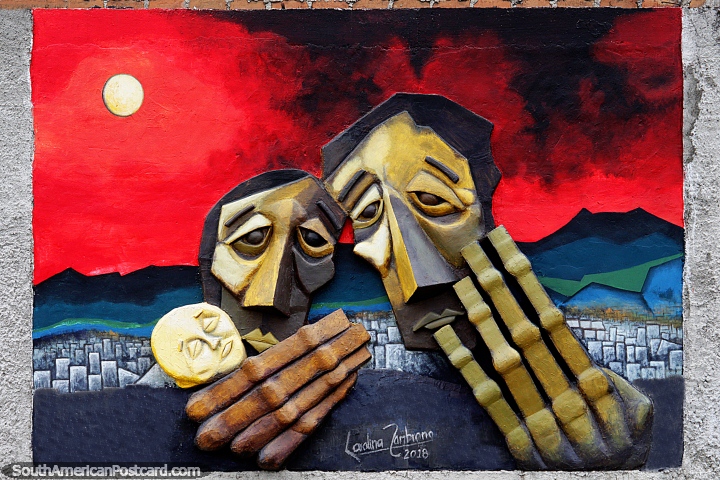