Santa Marta, Colombia - What To Do On The Hot Coast

Young man dances at the Festival of the Sea in Santa Marta, the group Centro Educativo Manuel Jose del Castillo.

Rodrigo de Bastidas monument and park on the waterfront of Santa Marta. 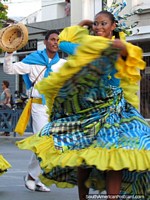 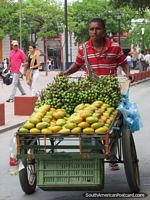 A man with a cart of mangos and mamons in Santa Marta.
Map location: Santa Marta, Colombia

The extremely hot city of Santa Marta on the north coast is Colombia's oldest city founded in 1525. I have been here many times - in 2008, 2010, 2011/12/13/14/15/16/17 and have spent over 5yrs living and having fun in nearby Taganga, just 10 minutes away. At the hottest times of the year from June through to August / September it is usually around 33-35 degrees in the day and drops to about 29 degrees at night. It's not a place that you struggle to keep warm in. It is not the most attractive of Colombia's cities but there is still some colonial architecture and interesting streets.

The indigenous people of Santa Marta are known as the Tayrona Indians, although you will rarely see any. I have seen the same family about 3 times in Taganga, they wear white robes. But there are at least 6 monuments of the Tayronas down along the median walkway and park behind the beach called the Malecon. The Malecon is a fun and busy place especially during weekends when it seems the whole city is spending the day at the beach. There is all sorts of food being sold including kebabs of meat and vegetables on a stick, shaved ice, rice pudding, shrimp cocktails, ice creams, soft drinks and beer. If you are a foreigner you will no doubt be asked several times if you want to buy some jewelry or a wristband by the walking vendors. The little island of Morro sits in the middle of the bay with a lighthouse on top. The port is at the eastern end of the beach and you will often see big ships out in the distance. The tall monument to Santa Martas founder, Spanish conquistador Rodrigo de Bastidas (1460-1527) can be seen from all along the Malecon. On the other side of the road there are many restaurants and bars where you can sit down under an umbrella and have a meal or cold drink.

Simon Bolivar Park over from the malecon has nice trees, flower gardens and a monument to Bolivar riding a horse. Santa Marta is actually the place where Simon Bolivar died in 1830 at an estate called Quinta de San Pedro Alejandrino. It is also known of as the Grand Hacienda, tours are possible.

15 minutes from Santa Marta is Playa Blanca beach at Rodadero, there are the usual hotels and restaurants and also the Rodadero Aquarium and Sea Museum, (in Spanish: Acuario y Museo del Mar del Rodadero). They have dolphin and seal shows plus sharks, sea lions, turtles and a lot more. I believe you can ride the dolphins if you pay extra.

Like Bogota, Santa Marta has a gold museum called Museo del Oro, it's located in a colonial mansion called Casa de la Aduana. It has gold, pottery and artifacts of the Tayronas and a model of Ciudad Perdida, the Lost City.

Santa Marta Cathedral built in 1766 is on the main street. Also in the city is San Fernando Fort built to ward off the pirates, constructed by the Spanish.

If you enjoy extreme sports and adventure then you should visit Mamancana Natural Reserve. There they offer mountain biking, wall and rock climbing, zipline canopy and paragliding, you can go for a nature walk and possibly see some wildlife. It takes 35 minutes to get to the mountain from the city.

The Feel of Santa Marta

Santa Marta is a fun, colorful and lively city on a hot and sunny coast with easy going locals and colored umbrellas. It has a laidback tropical feel, the people are not afraid to wear bright colored t-shirts and flip-flops on their feet. It is definitely easier to blend in with the locals. Street vendors sell everything from shoes to yummy cups full of jelly and cream and interesting fruits can be tasted at the fruit stalls. There are several banks and ATMs in an area between the main street and the sea and big supermarkets (Exito and Olympica) on the main street - a good place to stock up on food and water for the trip to Tayrona National Park. I recommend the supermarket called Olympica Sao if you want decent service (Exito is terrible). I have seen some interesting things while here, like when out of nowhere a man walking on stilts crossed the road in front of me. He was dressed in blue, orange and red with a white hat and a painted face. When I stayed here the first time, across the road there was a little shop where the shopkeeper had his pet iguana sitting up on the counter to greet the customers. Along the waterfront, there is an electronic temperature sign on the road by the sea, it often reads 35 or more degrees. I have been lucky twice now to have seen the Festival of the Sea parades during July and in 2016 got a press pass to get some photos from the middle of the street! Santa Marta has some pretty wild nightlife, clubs and bars too!

Santa Marta is the place to organise a trek to Ciudad Perdida, it's 5 days long and not to be taken lightly, the mosquitos can be quite vicious. It's a 20km trek through rainforest and across rivers. As you go you will see much bird and wildlife and also meet the locals of indigenous villages. The Ciudad Perdida was only rediscovered in 1975!


View all photos in the Santa Marta Photoset

Hotel Mare Mar, Santa Marta, Colombia (October 2020 - 1 night) - Hotel Mare Mar is the nearest hotel to Santa Marta Airport, but it ain't flash and not worth the $16USD I paid! Wifi wasn't great, air conditioner remote didn't work, tv did, bathroom stunk and the shower had a nasty brown stain on the floor (what was it?). The bed however was great for me, super hard mattress, good for my back. The restaurants outside serve the typical bad coastal food - carne, pollo, pescado. Yeah I know, meat, chicken or fish. But, meat what? Chicken what? Fish what? Nothing, just fry it dry, put a pile of dry white rice beside it, a tiny salad of tomato and onion and 2 patacones. The soup, salad and patacones I ate, most the rest of it I didn't, like I never do. Dear Colombia, please learn to cook.

Dreamers Hostal, Santa Marta, Colombia (July 2010 - 2 nights) - A was great here, I had a dorm with aircon which made it so much better and there is a pool to swim in as well as hammocks, tv room and outside kitchen and eating area. It is close to the Exito supermarket and buses. Recommended.

El Miramar Hotel (The Inns at Playa Grande), Santa Marta, Colombia (Aug 2008 - 2 nights) - The best thing here is the restaurant and the woman who cooks. Maybe if the place was clean and had some work done on it they could justify charging for the internet.
Colombia Travel Blog | Photos of Colombia | Festivals in Colombia | South America Videos 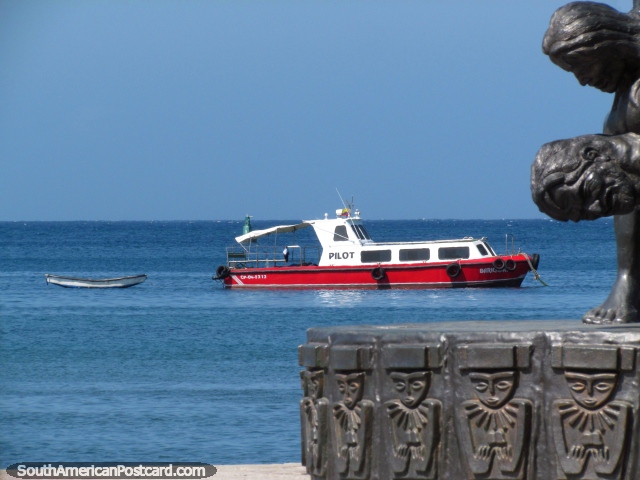