I wanted to improve my Spanish while living in Medellin in 2010 so I checked out some universities. I visited 3 universities to see what they offered in language courses and decided I would enrol at Universidad EAFIT which is in Poblado and close to where I was. It was also the nicest looking university of the three I looked at. I enrolled in levels 1, 2 and 3 of Spanish, each level is 4 weeks semi-intensive with 2hrs per day or you can do intensive which is 4hrs per day for 2 weeks for each level. I decided that semi-intensive was what I wanted to do and paid for 3 months worth of study.

The university then helped me change my visa from a tourist visa to a student visa, the good thing was that the student visa I got was for 5 months. I knew some basic Spanish from my travels and things I had taught myself and also from a few previous lessons I had had, but I needed to start at level 1 and fill in the holes and progress from there.

In level 1 there were 3 people in my class including me and our tutor called Juan. We learned verbs, names of objects, alphabet, numbers and about speaking in the present and future tenses, it was a lot of fun.

For level 2 I was very lucky because I was the only student in my class with my teacher Andres. I learned all kinds of things such as verbs regular and irregular, many objects and things, telephone conversations, ear training, writing about things and people and casual conversation. I enjoyed it very much.

Level 3 with teacher Beatriz had 4 students in total, this time we had a lot of emphasis on casual converstation where many times during the first hour of class we would talk to each other about things. This was good practice and good for ear training. In level 3 we learned about speaking in the past tense as well as more verbs and about pronouns, this was a rewarding experience also.

So after a few months of daily Spanish my ability to speak and understand the language had definitely improved, but I still needed a lot more practice. I am thinking of continuing Spanish at EAFIT with levels 4 and 5 in the future.

EAFIT University - How Is It?

As far as the university goes, it is a very nice place and has many facilities like a cafeteria with good hot meals during the day - 3 course lunch with drink is $4USD. It has a gym, pool, library, movie theatre, basketball court and courtyards to sit or study in. There are many people and the university has a wonderful and positive atmosphere, University EAFIT - open to the world.

While at university I lived for a while in Envigado, 10 minutes by bus from EAFIT and later 5 minutes walk from EAFIT in the Vegas apartments on the main road. The rooms in the apartments are cheap to rent and a lot of students live there. There is a nice swimming pool, gym and security at the gates. The university itself can help with accommodation while students are studying, they have a list of families with spare rooms for example. This is also a good way to practice your Spanish but offers less freedom in your living style but is cheap at around $100-$200USD per month possibly including food. Being at University EAFIT was a great experience for me and I hope to continue there in the future. EDIT 2017: After 7yrs of living in Colombia and traveling South America my Spanish is now pretty fine!


View all photos in the Universidad EAFIT Medellin Photoset 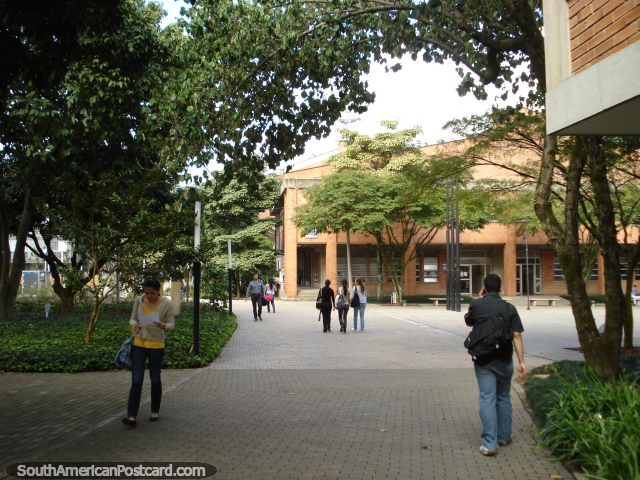