Bucaramanga to Cucuta, Colombia - 6hrs To Travel 200kms By Bus 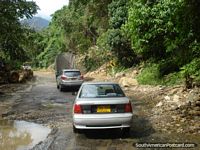 The road at the Cucuta end has a few problems from mudslides. 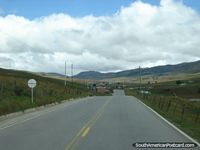 The top of the mountains between Bucaramanga and Cucuta. 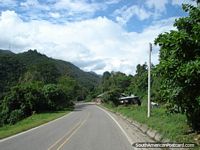 Gliding down the road towards Cucuta through the forest. 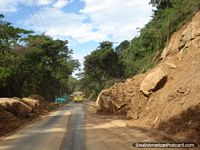 Half the cliff fell on the road in a big mudslide near Cucuta.
Map location: Bucaramanga to Cucuta, Colombia

You wouldn't think it would take 6hrs to travel 200kms, but with the condition of the road between Bucaramanga and Cucuta it certainly did. Much rain in Colombia in 2010 had caused many mudslides and problems on this road. The problems with the road are mainly at the Bucaramanga end and the Cucuta end, the middle part is fairly OK and offers some spectacular views.

Best Views on the Right

Sit on the righthand side of the mini-van. I was lucky again to score the front seat beside the driver for this trip. At first he would not let me wind down the window for my photo taking, but after some gentle persuasion (whinging), he let me roll it down.

We climbed slowly out of the Bucaramanga valley where views of the whole city can be seen on the right, it is 120kms to Pamplona and 193kms to Cucuta. 15 minutes later we see the first land slip on the left as we start to make a slow accent on a curvy road into the mountains. Pamplona 104kms, Cucuta 177kms. We pass through a small community called La Corcova. After here there are a series of mudslides and there is a big crack in the road also, the surrounding mountains are lush and green. The road gets narrow at this point as we glide past another huge crack in the road as we accend around the curves. A few minutes later on the right a whole slice of land has slipped away right beside a house, Pamplona 85kms, Cucuta 157kms. A few minutes later we are traveling just under the clouds, it's cooling down a bit, now we are in the clouds and visiblity is low, we have reached the toll gates and just a few minutes later we are out of the misty white clouds. From here the road smooths out and we pass through an army checkpoint. The land is becoming more open and spread out and there is a community up here - houses, a school and farms. This place is called Narai. We waited for about 10 minutes for some road works, this was a good opportunity to buy coffee or hot chocolate from the locals beside the road. We continued through the villages. I see a brown and white church on the left with dual bells. Pamplona 61kms, Cucuta 134kms.

Now the fun begins with some amazing scenery, views and terrains as we cruise along the edge of sharp drops. There is the occasional small mudslip and crumbly road but nothing too serious. Now we pass through the community of Cuestaboba, the air is lovely and fresh up here. The road here has wide curves and is cut into beautiful rocky green hills. Pamplona 55kms, Cucuta 128kms. Now we pass through the village of El Hatico and continue rolling around the curves. Sometime a while later we pass through a community where a large brick church is on the rightside, this is just before the town of La Laguna which looked fairly basic. A place called Mutiscua is 2kms to the left, it's 24kms to Pamplona and 97kms to Cucuta. 5 minutes later there is a series of mudslides with rocks and trees covering part of the road. Pamplona is now in sight down ahead in the valley on the right. It's quite a large place set in a beautiful valley and surrounded by the hills. It is a city of students and culture because it has a university Universidad de Pamplona. A cow stands in the middle of the road as we get nearer to town. There's some nice things to see on the way through - the church of white on the left and a wall mural dedicated to independence. There are a couple of other churches we pass near, one is Iglesia Humilladero. At the other end of town we cross the Rio Pamplonita. Cucuta is 73kms from the center of Pamplona. Pamplonita town 8kms, Bochalema 32kms and Cucuta now 66kms away.

20 minutes later there's a huge chunk of rock laying across the road, now we are in Chinacota on road 55 heading north. The road is getting hazardous with Cucuta now 40kms in front of us. A place called Durania is 17kms to the left. After the bridge, another huge chunk of cliff is laying on the road before we come to the toll gate. Cucuta is 19kms from here. There are a series of major mudslides in this part, some look very spectacular. 10 minutes later we pass through a little town, it has a beautiful white and gold parish Parroquia San Vicente de Paul, soon it is only 6kms before Cucuta.

The roadside along here has a big row of flower stalls and plant nurseries beside it. As we come into Cucuta there are signs pointing towards Venezuela which is where I would be going to the next day. A six lane motorway takes us across the river. A statue of the founder of Cucuta Juana Rangel de Cuellar (1649-1736) is on the right in a park. The traffic is heavy coming into the bus terminal as we go around a large roundabout where a monument of a man holding a bow and arrow stands.


View all photos in the Bucaramanga to Cucuta Photoset 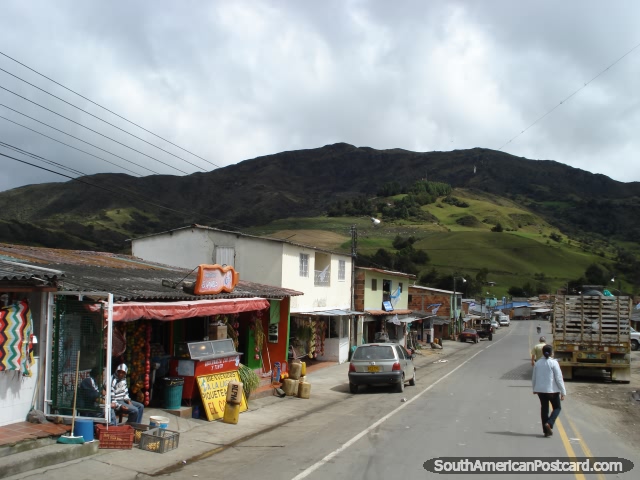