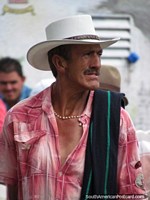 I got my hat, my mustache, unbuttoned shirt and scarf, here I am, a Penol local. 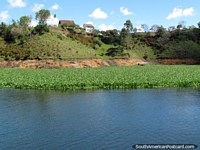 Weeds build up on the edge of the lagoon before a machine comes and gets rid of it in Penol. 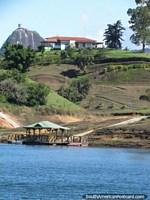 The Rock of Guatape creeps into view while we cruise around the lagoon. 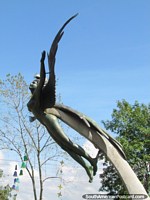 I had a great opportunity to travel down to Guatape and Penol from Santa Marta on budget Colombian airline Viva Colombia with a friend to stay on his houseboat on the lake for 6 nights, the return ticket was only around $85USD. Guatape is very close to Medellin and despite the fact I lived in Medellin for 5 months in 2010 I never visited Guatape during that time. If I had it would have only been for a day trip I'm sure. I was lucky this time to have a whole 6 days to explore and enjoy this beautiful part of the country.

Houseboat on the Lake

The houseboat was located near the bridge over the lake (the Embalse - reservoir) down the road from the new town of Penol. Local transport around the area between Penol and Guatape is by jeep or bus, just hail one down from the street. On my first full day I headed to Guatape by jeep from the bridge, it's only about 15mins. The road goes right beside the huge rock known as 'La Piedra' or the 'Rock of Guatape'.

Coming into Guatape I got the feeling I was arriving somewhere quite unique and special, like a place out of a fairytale or nursery rhyme. I got out of the jeep at the point I first started seeing the colorful houses in the streets on the hill above the central plaza. It was a good day to be there, midweek, without all the tourists. It is impossible to describe Guatape in words really, that's what the photos are for!

Briefly, it's all about cute houses and facades with beautiful colors and painted sculptures with images of life in the area. There are wooden doors and window shutters, streetlamps, cobblestone streets, tiled roofs, flower baskets overhanging the footpaths and ceramic pots with plants along the streets. It's quite an eyeful! Every house and facade is different, everybody can express themselves - how the community came together to manage such a feat is beyond me, pure magic I say!

On the various streets around town you will see posters showing and explaining how the town was constructed and its history. 'Pueblo de Zocalos' is another name given to Guatape which means - the people of skirting or baseboards. The idea to create the skirtings in Guatape happened during the late 70's - early 80's. Guatape was originally founded in 1811.

Around the central plaza are a few restaurants, this is where I took a break for a local traditional lunch consisting of meat, rice mixed with red beans, platano (cooked banana) with scrambled eggs. With that I got an arepa with white cheese, bread and hot chocolate. Not bad for $7000 pesos ($3.50USD). Beside the plaza is the big cathedral and all around are small shops, the bakery on the corner, a pool bar and locals hanging out. In one corner of the plaza is a big gold statue of Simon Bolivar. Heading down the street from the plaza takes you to the lagoon where you can walk, sit, go for a cruise on the water, eat yummy deserts and see the 3 not so normal monuments of a surfer, a tall woman and a dinosaur creature. By mid-afternoon I was blinded by the colors and shapes and took a jeep back to the houseboat near Penol.

Climbing the Rock of Guatape

A couple of days later I headed out once again to Guatape from Penol while stopping to walk up the 659 stairs to the top of the great rock along the way. Just get out on the main road and take a mototaxi up to the entrance point. From the main road I took a horse up, but it only went halfway and I had to walk the rest. Don't do that, take a mototaxi. The fee to climb the rock is $10,000 pesos ($5USD). It took me 17mins to get up there including several rests and photo stops. Once at the top there is also a mirador tower you can climb up to get even higher. The 360 degree view is nothing short of spectacular! There is a different set of stairs to bring you back down. They are in the middle of the rock inside the outer stairs and it only takes a few minutes to decend.

What happened next was quite interesting, there is a statue at the bottom of the rock of Luis Eduardo Villegas Lopez, he was the first man to climb the rock back in 1954. I took a photo of this statue, there was nobody in the background. Then I turned away and took a photo of something else. Then I turned back around to walk somewhere else and suddenly standing right beside the statue was a man who looked exactly like the statue itself! I couldn't believe my eyes, I snapped a picture super fast and a few seconds later he walked away. The same thing also happened to me twice in Guatape, see these 2 photos here and here.

From the rock I shared a mototaxi across the bridge a few kms to Guatape to have another look at the place and to try out some different photo taking ideas. I am pretty sure I have a photo of every street corner and facade worth seeing in the whole place! I made a little movie this time too, see video.

Quiet Day at the Lake

I had a quiet day the next day while my friend painted the boat and prepared it for a 40 person cruise for the following day. I was looking forward to that indeed! A big weed eating machine was munching its way through the weeds on the lake near the boat as men collected it from the edge and carried it up the hill to rot. The odd tourist boat headed out to give people a tour around the lake.

The Replica and Cross of Old Penol

I could see in the distance the big cross coming out of the water, this is the site of the original town of Penol. Up on the hill behind the boat is the replica of the old town of Penol. I planned to visit there in the morning before the cruise. I headed up the hill to see the replica. It's all there, the plaza, the church, buildings with colored balconies and a pair of busts of local men. There are a couple of photos on the outside of a shop, one is of the original town and the other of the original plaza.

Cruise on the Lake

We were lucky with the weather, it was a beautiful sunny day, just perfect. The cruise was on with Captain Richard at the helm, we cruised to pick up all the people from a nearby property. This place is more than beautiful, more like a paradise of water and waterways with lots of sights to see, from houses and farms on the surrounding hills to Pablo Escobars bombed out mansion, a floating restaurant boat, watersports like jetskiing, the cross, the big rock and a lot more. The 2hrs went by too fast but a good time was had by all! A 2nd video shows the lagoon cruise, enjoy.

Next day was the last day before flying back up to the north coast. I set the morning aside to go up and have a better look around the new town of Penol, just 5mins by jeep from where I was staying. The most significant landmark is the church which is shaped like a huge rock, just like the real huge rock La Piedra. Plaza Bolivar is down from there with a statue of course, can you guess who it is of? There's a monument to Penol's founder Fray Miguel de Castro and another of a flying angel. It was a Sunday and this is the day all the men and farmers from the area dress up in smart clothes and hats and come into town to socialize. I took the opportunity to sit down and get a few photos of these local cowboys. I enjoyed my time in this part of Colombia a lot and look forward to getting back there another time.


View all photos in the Guatape / Penol Photoset 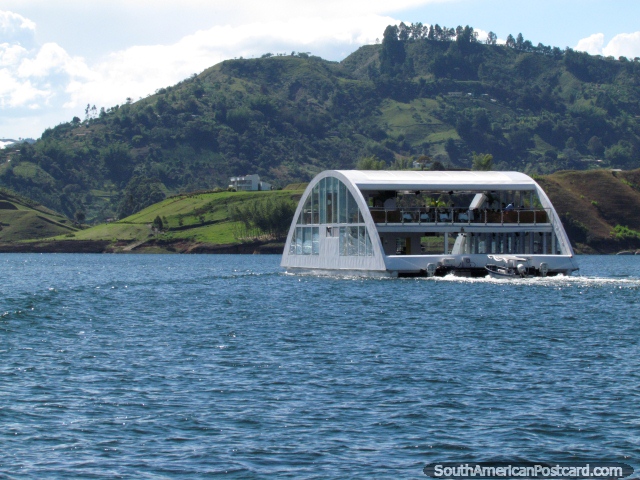