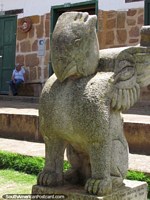 A winged animal, stone statue near the cathedral in Barichara. 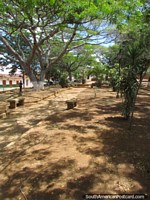 The park of Jesus next to the church of Jesus in Barichara. 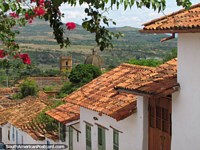 Just 30mins by bus from San Gil is a magical place called Barichara, an old colonial town that is so pretty, so perfect, like something from a fairytale, except its real.

Barichara was originally founded in 1705 and is in flawless condition due to care and tasteful restoration work over the past decades. To say it is a photographers paradise is an understatement. This is a town of cobblestone streets, yellow stone walls, whitewashed adobe walls, fire-red tiled roofs, cute wooden balconies, little street lanterns, wooden doors and windows, flower pots, tidy parks, stone churches and beautiful facades everywhere.

Buses and Cathedral at the Main Plaza

The bus arrives and leaves from the main plaza beside the impressive golden stone cathedral Catedral de la Inmaculada Concepcion built in 1760. At the front of the cathedral is a bust of the first bishop Monsenor Domingo Rafael Afanador (1871-1957) and along the street beside are several small stone figures. In the park is a bust of former President Aquileo Parra Gomez (1825-1900) who was born in Barichara.

My exploration around a few nearby streets brought me to a large stone church built upon a large stone road - Capilla de Jesus (Capilla de Cementerio) built in Romanesque style in 1797. There is a beautiful quiet park beside with a Jesus fountain and lots of trees.

The streets and houses are fascinating, sometimes you see interestings things on the walls of peoples homes through the open windows and cane bells hanging outside above the sidewalk. The most interesting thing I thought was that there were no people to be seen, the locals were simply not visible.

Mototaxi Up the Hill

To one side of the main plaza are little mototaxis, from there you can see a church far up the top of a long street. In one of these taxis for 2000 pesos I got a ride up to the old stone church Capilla de Santa Barbara, the original church of Barichara. Outside is a monument of a pair of oxen (Yunta de Bueyes) to celebrate how much these animals have helped the local farmers shape and plow the land and transport cargo. A large stone cross stands in the middle of the road.

Good Views at the Top

There are nice views of the town and valley from the top of this steep road. Walking back down was the fun part - more beautiful houses, streets, shapes, textures and colors. A man passed by on horseback as I walked towards the tall white monument that can be seen from various points around town. On the street below this monument is a large ant monument. Catching and eating these large-bummed ants is a popular activity for locals in this area, eaten as a crunchy snack.

Again by mototaxi I took a trip to the other side of town (just 2 minutes) up the hill to park Parque Mirador for grand views of mountains beyond and the valleys below. Once again the walk back down through the streets was a highlight! So many beautiful angles for taking photos with the cathedral dome and towers in the distance behind the red roofs. It's like a dream, the perfect place, flawless, unreal, an unscary ghost town.

I had a quick look inside a museum in the town center after enjoying a nice lunch at a restaurant. The museum has items representing the history of the area, historic photographs and interesting rock artifacts and fossils.


View all photos in the Barichara Photoset 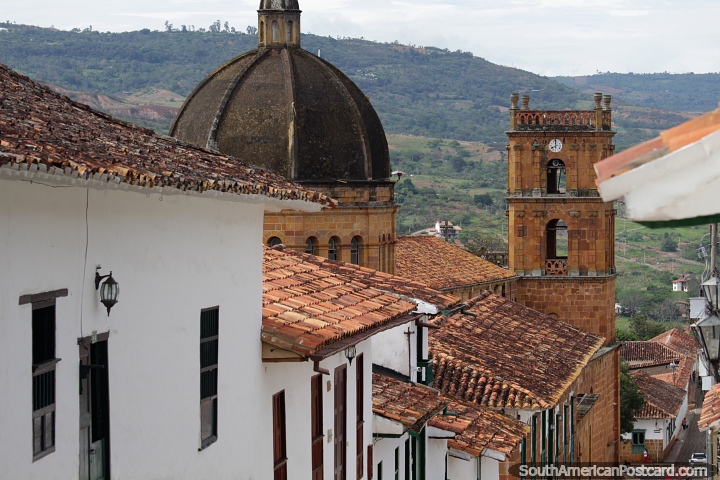