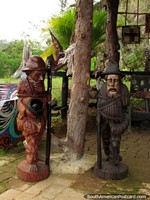 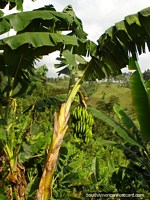 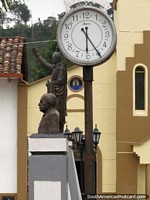 Clock-face, Bolivar statue and bust at the plaza in Salento. 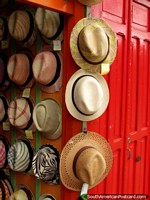 Salento located 30-40 minutes from Armenia or Pereira is the heart of the coffee region. The countryside along the way is beautiful and green with rolling hills and lots of trees. Salento is located inside Los Nevados National Park.

I had read online that The Plantation House was a good place to stay. Their website offers a lot of information about the Salento area also.

Decending into the Salento valley down a winding road lined with tall thin trees with great views and passing through the village of Boquia and crossing over Rio Quindio (river) where camping areas are available - one is called 'Camping Monteroca'. There is art and coffee stalls along the side of the road before the road winds back up to reach the main township of Salento.

From the Plantation House, we set out on a rough road for about 40 minutes. Along the way seeing the tall Wax Palms on the green hills in the distance. Once here there are horses on the dusty road for hire and groups of people beginning a ride through the park. People also walk the track but I would definitely recommend taking a horse. The sight of the Wax Palms up on the hills with the clouds down low among them give the valley a ghostly sense. From the horse area and road which also has several restaurants selling fresh trout it is 2.4kms to Cocora, 5.7kms to La Montana, 8.4kms to El Bosque, 4.8km to Acaime (to see hummimgbirds) and 9.1kms to Estrella de Agua. The rocky and gravely path heads down the hill past a trout farm on the right and across a bridge over a small river at the bottom. After this point if you are walking you will wish you were on horseback because the track is very rough and awkward to walk on. After 12kms of walking crossing several bridges we arrived at the hummingbird sanctuary. It's a nice place to relax and watch the hummingbirds dart around in nature. I say again take a horse up here! Afterwards we traveled back to Salento on a beautiful tree lined road which was sealed and smooth - over rivers and past farm houses and animals grazing.

Salento is busy with many people in town during the weekends from surrounding cities enjoying themselves in the plaza and streets - shopping and eating while the kids play on push around toys and sidewalk games such as target shooting. The plaza itself is nice with mainly white houses with colorfully painted doors and windows surrounding it. The church and clock tower dominate one side of the square as well as the skyline of the town itself while in the center of the plaza is a statue of Simon Bolivar and Pedro Vicente Henao. The plaza usually is surrounded by parked Willys Jeeps which is the main means of transport in town. At the end of one of the streets leading off the plaza is a long blue and yellow staircase leading up a hill to Salento's Mirador lookout.

A highlight of visiting Salento is of course a tour of a coffee farm. The Plantation House has it's own coffee farm 10 minutes walk from the lodgings and costs just a few dollars, it is called Finca Don Eduardo. The coffee farm also has a bamboo forest, waterfalls and a lookout point to see the great views into the valley. Our group of about 14 plus our guide / owner Don began the walk through the finca and walked among the coffee plants. A detailed explanation of the various stages of coffee growing is given, from coffee cherries on the plants themselves, through to the drying process and the dried and roasted beans. Finally ending with a cup of a freshly produced hot coffee! First part of the tour you see some very young and small plants planted in the soil and shortly afterward some larger plants producing coffee beans. They are green at first, then turn red and finally rippen to be orange. It is OK to pick some of the ripe beans from the trees and chew on them. They are a sweet flavour with only a hint of coffee in the middle when picked straight from the tree before they are dried. The coffee plants are not huge but many are covered in green and red coffee beans growing in the sun while being shaded by banana trees planted specifically for that purpose. Shade is a very important factor. After the beans are picked they are put into water, the ones that float are not good and removed. The rest are dried in the simple (made from bamboo) outside drying room on the ground and also on the sliding rack up on the roof. When being dried, the dark colored beans are removed.


View all photos in the Salento Photoset

Hostal Girasoles, Salento, Colombia (September 2020 - 2 nights) - With a great setting overlooking the valley, Hostal Girasoles is a nice place to stay in Salento. A private room for around $17USD with bathroom, tv and wifi. The bed could use a firmer mattress, was a little sunken. The staff are friendly and helpful and the 2 sheep who live beside the driveway are too! Located at the entrance road into Salento beside the bus terminal. Recommended.

The Plantation House, Salento, Colombia (June 2010 - 1 night) - The house and dorms are in a beautiful location with many outdoor areas to enjoy. There are hammocks, party room, kitchen for cooking, internet and lots of fun.
Colombia Travel Blog | Photos of Colombia | Festivals in Colombia | South America Videos 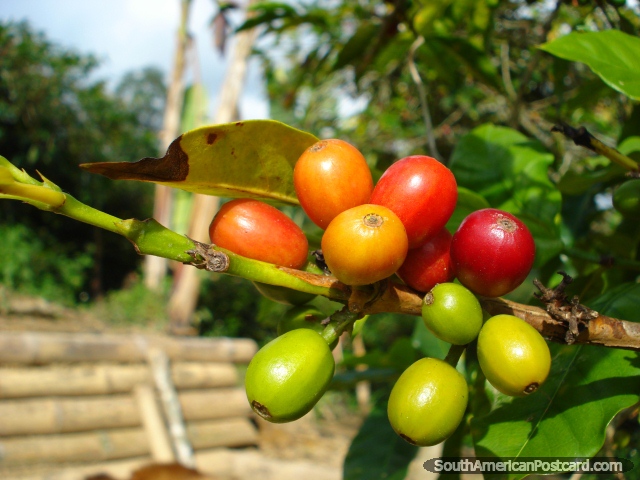