Bucaramanga, Colombia - Things To See Around The City

Santander Park and the white tower with green and yellow dome of the cathedral in Bucaramanga.

The central historic area in Bucaramanga with the dome and tower of church San Laureano.

Street and houses in Giron with white-washed walls and flower pots, 10kms from Bucaramanga. 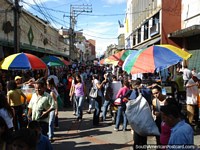 Not the most attractive city I have seen, quite industrial, but it has some interesting things to see like markets, parks, churches and monuments.

The place I stayed at was on a street full of budget hotels and nearby were many shops that sell shoes. I needed a new pair, so if you need shoes then Bucaramanga is a good place to buy them. With my new shoes on I set out for the day to explore the city which has quite a warm climate.

I walked in the direction of the huge Exito supermarket. There are some walkway bridges that cross over the busy 4-lane road, you can see some good views from these bridges and see the tops of the churches. This gave me a sense of which direction I should be heading in. The first nice thing I found was a park called Parque de los Periodistas, it is quite small but was a welcome break from all the concrete. It is right in front of the Exito supermarket. In the park there is a bust of Don Prospero Rueda Rodriguez, he was a journalist and social leader. But even cooler is the sculpture of a man made from bronze nuts and bolts and pieces of scrap metal, he looks like a robot. I continued on to the left of the supermarket past Sanandresito shopping mall in search of one of the churches I had seen from the bridge. I found it nearby, it is pink color and has a white statue of a woman holding a baby in the archway above the door.

I ventured on towards the cathedral which has a big yellow dome and 2 white belltowers, it is called Catedral de la Sagrada Familia and is opposite Parque Santander. It was open and I had a peek inside - white pillars and stained glass windows, very nice. Over the road in the park there is a great looking monument to highlight global warming called Calentamiento Global, it is a man and woman holding a big globe of the world above their heads. In the park there are shoeshiners and people selling food like popcorn and also a statue of Francisco de Paula Santander (1792-1840), he was a military and political leader.

The central markets and shopping area was close by and this is where I found myself next. The streets were very busy full of stalls selling cloths and all kinds of things, the people of Bucaramanga were busy buying Christmas presents here. There was a man sitting on the ground of the arcade painting beautiful pictures using spraycans and a couple of guys standing still like statues and when money was put into their tins they would move and perform an action, that was entertaining.

Nearby as I walked around I came to the Palacio de Justicia - Vicente Azuero Plata, a grand and important looking building, it is on one side of a huge plaza. On the rightside of this plaza is the biggest head cast I have ever seen, it is about the size of a car, the man is Luis Carlos Galan (1943-1989), he was a journalist and liberal politician. Down the street a little I came to another park, statue and church. The statue is that of Aurelio Martinez Mutis (1884-1954) - I believe he was a poet. The church is Iglesia de San Laureano and the park is Parque Garcia Rovira. Very close by is another church called Capilla de los Dolores, it's the oldest in Bucaramanga. In front of the church on the opposite side of the road up some stairs is a monument of 3 men, one holds a book, one a knife and the other a spear. Along to the right of this was a model of a miniture city, very intricate indeed. This general area is lovely and peaceful and has many tall trees, grass and gardens, you can buy an icecream from the icecream man or a drink in the park. By this time the sweat was pouring off me and I made my way back to my hotel.

I spent the night and taxied to the bus terminal in the morning for a rough 6hr ride to Cucuta on a very bad road on my way to Venezuela. The bus terminal has 3 ATM machines for which none worked for my bankcard so I had to use a credit card to get money. If you need money it might be better to find an ATM in town.


View all photos in the Bucaramanga Photoset

Hotel Vajamar, Bucaramanga, Colombia (April 2021 - 2 nights) - Hotel Vajamar in Bucaramanga offers a great deal for around $20USD. A lovely room up on the high floors with balcony overlooking the city and streets. With private bathroom, tv and wifi you would be hard pressed to get anything better for the price in Bucaramanga. Located in the area where most hotels are located in the city, just up from Park Centenario. Recommended.

Hotel Palmeras de Mariana, Bucaramanga, Colombia (July 2013 - 1 night) - This hotel is located in a great part of Bucaramanga where there are many other well-priced hotels and restaurants. The room had tv and private bathroom, it was perfect. Recommended.

Hotel San Patricio, Bucaramanga, Colombia (December 2010 - 2 nights) - I was comfortable here for a couple of nights with a room with tv and bathroom, it is in the center of the city near shops and food on a street with many budget hotels.
Colombia Travel Blog | Photos of Colombia | Festivals in Colombia | South America Videos 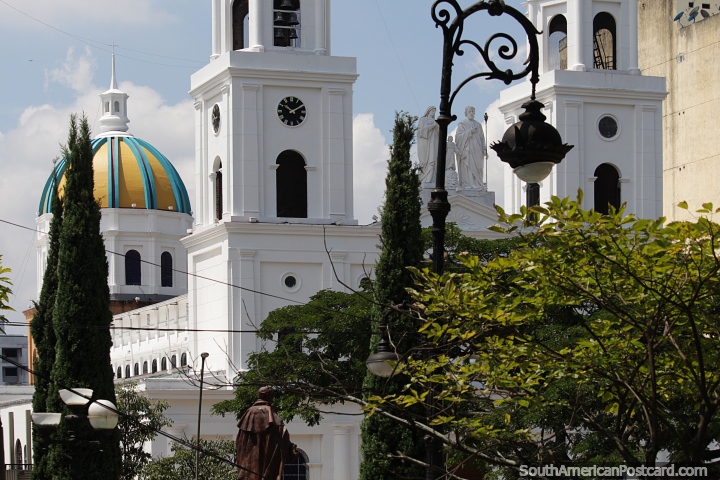