Psychedelic flowers painted around a door in San Antonio in Cali, nice decoration.

Man with a sword on a white horse, stained glass window at the cathedral in Cali.

I traveled through the night, firstly from Ibague to Armenia (3hrs 30mins), waited 90mins and then continued from Armenia to Cali (2hrs 30mins). It was good to be back in Cali and this time I aimed to do and see some new things!

In the city center of Cali there are some great sights to see, many located around the river. The huge park - Parque de la Retreta has many trees and open spaces, bridges and pathways. A beautiful and peaceful place to walk, ride a bike, play and relax. Ermita Church is a huge highlight standing on the other side of Ortiz Bridge (1845) from the park. The current Neo-Gothic structure was built between 1947 and 1953. The original chapel was built in 1606, later a stone church was built in 1810 after earthquakes and then this stone church was destroyed in 1945 during World War II. Ermita Church houses the 18th-century painting called Lord of the Sugarcane that many miracles have been attributed to. Beside the church is Poet's Park, a social area, a place where you may see impromptu performances and dancing. Jorge Isaacs Theater (1931) stands beside Poet's Park and has been a national monument since 1984. From Poet's Park you can take a walk for quite some distance along the wide pathway beside the river. The park has security men around the place rather than police, it gives people a little more freedom. A short walk of 1 or 2 blocks from Ermita Church is Cayzedo Plaza (Plaza de Cayzedo) where located are many of Cali's finest and most handsome buildings including the cathedral (San Pedro Apostol Metropolitan Cathedral), the National Palace and Courthouse, the Otero building, the Ulpiano Lloreda building and the Bank of Bogota building.

The artsy / bohemian neighborhood of San Antonio (Barrio San Antonio) has many art shops and awesome street art to enjoy and the streets are pleasant to stroll around. The neighborhood sits below the towering San Antonio Hill (Colina San Antonio). Walk up the long stairway to the top where there's a chapel, fantastic views of the city, refreshments and lots of hot sweetcorn for sale!

La Merced Archaeological Museum (Museo Arqueologico La Merced) in Cali features amazing Colonial art and pre-Columbian pottery. Many of the artifacts come from the Valle del Cauca and Tolima regions of Colombia. Among the highlights are figurines from the Tumaco culture and intricately painted Quimbaya vessels. In the words of the museum itself, "clay that makes us think of what we are and have been... volumes, vessels, faces, urns, folds, men, creatures, monsters that invite us to look closely, to doubt, to inquire, to feel, to look closely". La Merced church and museum is one of the oldest buildings in Cali and was founded in 1536. The museum is open from Monday - Saturday, 9am-1pm, 2pm-6pm. Beside La Merced Archaeological Museum is the Museum of Religious Art.

From Cali I traveled to Buenaventura (2hrs 30mins) for my first time on the Pacific coast of Colombia.

I travelled 3hrs from the southern city of Popayan to Cali by bus, the views from the right side of the bus are breathtaking. After arriving at the terminal I found a hostel about 15 minutes away. Cali didn't look like anything special to me at this stage. To be honest Cali is not that attractive in many parts of the city, but it did slowly grow on me over the next few days. Cali is mainly known for its beautiful woman and nightlife. It's also known for its Salsa dancing but I will also remember it as a place that has the most amazing street art on the walls around town. I stayed in a safe part of the city near the foot of Monumento de las Tres Cruces - the mountain with the 3 crosses at the top. It is an easy part of town to get to anywhere else around the city, either by walking, taxi or bus. In the middle of the year the temperature is warm here, it was sitting at 30 degrees most of the time. There are some public swimming pools, a group of us from the hostel visited them one afternoon, it was $7,000 pesos for entry. If you are in Cali between Christmas and New Years Eve, you will see the cities main festival, the Feria de Cali.

As for nightlife, there are many clubs in the city where all the beautiful women are. A big group of us from the hostel went out on Friday and Saturday nights. Starting off at a bar with a live rock band and laid back atmosphere was great fun. Later it was time to hit the nightclubs and experience some of what Cali is best known for! Well, yes it is all true, the clubs are packed with some very attractive woman. It was not always easy for our big group to gain entry, some clubs refused to let us inside. I ended up somewhere called 'Prada' and had a good time there for a while. If you can dance Salsa, that's a bonus, shame I couldn't.

The next day I went with some friends to watch them have some Salsa lessons, it cost $20,000 pesos, about $11USD for a 1hr lesson. This was no ordanairy dance studio though, it was owned and run by a Salsa champion. There were trophies and awards all around the building, it is called 'Escuela de Baile - Swing Latino'. The lesson consisted of the instructor showing my friends Salsa moves of different varieties to various beats for the next hour. The floor was of great quality and there were mirrors on the walls.

After 3 nights in Cali I headed north to Armenia.

I passed through Cali again in 2011, arriving by plane from Santa Marta via Bogota and took a taxi to the bus terminal to head south to Ipiales. This was the beginning of 5 months on the road through Ecuador, Peru, Bolivia and Argentina. The area around Cali has problems sometimes with the FARC, sometimes when arriving or leaving Cali by bus there may be a roadblock as was the case on this day. We were stopped at a police roadblock for over an hour on a stretch of highway 1 hour out of the city waiting for any problems ahead to be sorted out. We got away finally and passed through Popayan 2 hours later. In mid 2012 I arrived in Cali overland from the south and spent the night in the airport terminal waiting for an early morning flight via Bogota to Santa Marta.

Some of the beautiful animals you will see when you visit Cali Zoo in Colombia. https://t.co/gjDOLHSV0z The zoo has lots of big spaces for the animals and they are well looked after! Located not far from the city center. https://t.co/ln5s9XQrZ8 #animals #Travel #TravelTuesday pic.twitter.com/jRZEnhfRxY


View all photos in the Cali Photoset

Hotel Centralia, Cali, Colombia (May 2018 - 3 nights) - Located across the road from the bus terminal down a sidestreet. $35000 pesos for a basic room with bathroom. Bed was good, window opened, easy-going staff, secure and easy to get to and from by taxi. Makes a good base for a few days in Cali for the budget traveller - no hostel dorm required!

Pelican Larry Hostel, Cali, Colombia (June 2010 - 3 nights) - In a good part of town near a few things, dorms a bit crowded, has a nice outdoor area where you can hang out, lots of space to walk around in the hostel.
Colombia Travel Blog | Photos of Colombia | Festivals in Colombia | South America Videos 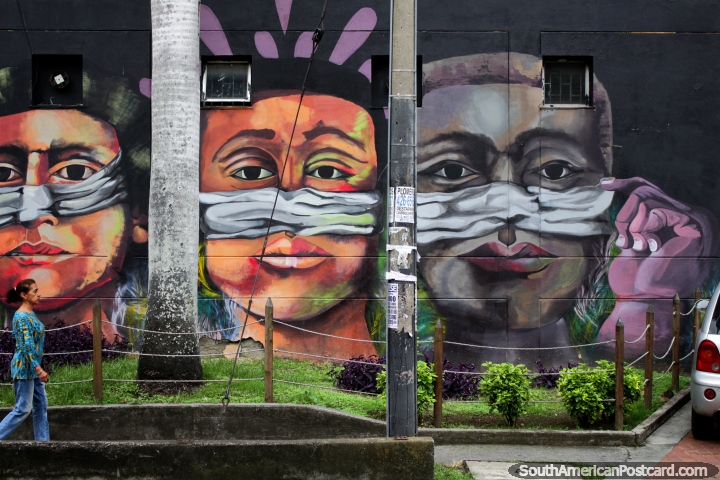