View through an oval window to trees with purple flowers and green lawns in Guatavita.

Between a bullfighting ring and the Tominé Reservoir sits the small town of Guatavita with its whitewashed buildings and red-tiled roofs some 70kms north-east of Bogota. The reservoir, completed in 1967 flooded the original town of Guatavita and the new town was built on higher ground. This is a very similar story to that of Old Peñol in Guatape where the old town was flooded to create the Peñol-Guatape Reservoir in the late 1970's (near Medellin). There is actually a life-sized replica of Old Peñol in New Peñol! Guatavita was rebuilt as a replica of a Spanish colonial town hence the bullfighting ring (Plaza de Toros) and architectural style as a theme throughout the town such as its white houses, clay tiles, wooden doors and windows, archways, bridges, stairs and cobbled streets. A mix of pre-Columbian, Andalusian, colonial and contemporary styles, a place that invites you to walk through each of its spaces and discover the architectural details that make it unforgettable!

I arrived in Guatavita from Zipaquira - 90mins by bus from towards the west. Guatavita would be my final stop on the 4 city circuit I had traveled north of Bogota - they being Tunja, Villa de Leyva, Zipaquira and Guatavita! As well as seeing the town of Guatavita itself I also wanted to go on a tour to the sacred lagoon.

To See In Guatavita

The Indigenous Museum (Museo Indigena) is one of the places to visit while in Guatavita and has a display of ceramics, old photos and models of indigenous villages etc. The museum is located beside the Plaza of Arts and Crafts (Plaza de los Artesanos) - an area with shops and stalls selling beautifully woven Andean shawls and other warm woolen clothing. On the other side of the plaza is the white church with its tall tower - Parroquia Nuestra Senora de los Dolores inaugurated in 1991. Guatavita also has a theatre - Teatro San Jose and has some good restaurants much like Villa de Leyva does with a more international flavour, but they seem to close a little early. I was lucky to find something to eat at 7pm, but I did and it was very good! Photography is fun in Guatavita, of course it's a place to be creative with angles and with the interesting shapes of the buildings. Black and white could work here!

To the side of the main carpark in the center of Guatavita is the office to book a tour to the Cacique Guatavita Lagoon, tours leave throughout the day. This is the sacred lake of the Muisca people who offered gold to the Gods in a powerful ritual and the birthplace of the legend of El Dorado - a mythical tribal chief. The lake was discovered in 1537 and with various unsuccessful attempts to drain the lake to retrieve the gold (very little gold was able to be retrieved) in 1545, 1580 and between 1898-1929, the lake was designated protected in 1965. From the carpark in Guatavita the bus will take you to the lagoon and of course bring you back. Once you arrive at the entrance and after paying the fee, a guide will take you through the reserve and up to the lagoon. Along the way you will stop several times for the guide to tell you the stories and about the events of the Muisca people and how it all relates to the lagoon at the top. During the walk you can take the opportunity to enjoy the flora beside the pathways.

4am Bus to Bogota

From Guatavita I wanted to get south to Bogota and I didn't want to get stuck in rush hour traffic so I took the earliest bus out of Guatavita at 4am, the trip takes 1hr at this time. I did intend from Bogota to head south-east to Villavicencio but the road was closed due to landslides. Instead I headed west to Girardot - 3hrs 30mins by bus.

The story of Guatavita 70kms north of Bogota #Colombia. In 1967 Old Guatavita was flooded by the Tomine Reservoir & New Guatavita created in colonial Spanish style. Nearby the sacred lagoon of the Muisca people was the site of gold offerings to the Gods. #Travel #TravelTuesday pic.twitter.com/Hez9GqhFRZ


View all photos in the Guatavita Photoset 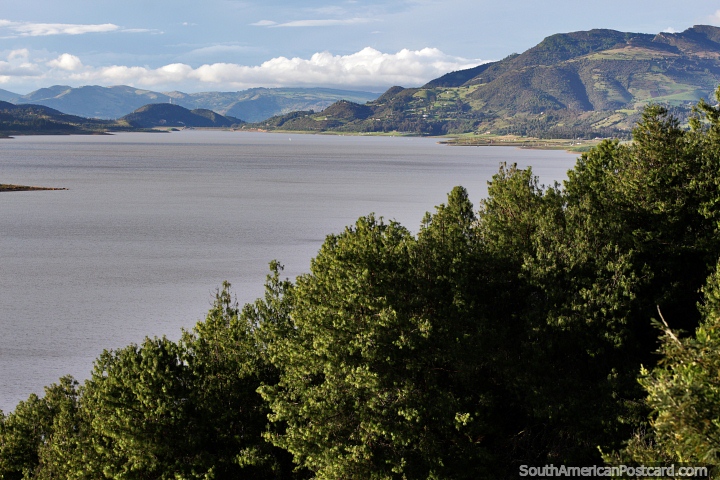