The Antonio Ricaurte Museum in Villa de Leyva has beautiful gardens and flowers.

Ceramic mannequin lying on the lawn, view from a patio at the Terracotta House in Villa de Leyva.

Lemon in a tree, nature at the Antonio Ricaurte Museum in Villa de Leyva.

Villa de Leyva is a place I had heard a lot about over a period of several years before deciding I would visit myself. It's one of the must-see destinations in Colombia! Villa de Leyva is a 16th century colonial town where all its original architecture is intact - a town of whitewashed buildings, cobblestone streets, art shops and galleries, museums, good restaurants and many activities in and around. You'll need a few days to enjoy everything Villa de Leyva has to offer! It's 3hrs north of Bogota or you can come here via Tunja (1hr 15mins bus).

The Plaza Mayor, Villa de Leyva's main plaza is absolutely huge and is made of very large cobblestones, so large you almost need hiking boots to walk across it. I wouldn't walk across the plaza in high heels or fancy shoes put it that way! The Plaza Mayor is where the fun begins in Villa de Leyva with some special sights around it. Firstly the white church built between 1608 and 1665 - Church of Our Lady of the Rosary holds center stage and on the corner on the opposite side is the Luis Alberto Acuña Museum which is quite awesome indeed and well worth a look. Cafes, restaurants and shops fill out most of the rest of the plaza area. On each corner of the plaza are 2 streets leading out to the rest of the town. This is where you can really start exploring this beautiful place and discover all the interesting and intricate things there are to see here!

To describe the character of the streets surrounding the Plaza Mayor in Villa de Leyva is going to be fun! Wooden balconies with bright coloured flowers in ceramic pots adorn the whitewashed buildings below red tiled roofs. Iron streetlamps ornament the cobblestone streets further. Arts and crafts shops offer a wide range of items including classic Andean woolen shawls and colourful indigenous masks. Art galleries display many beautiful works and antiques shops offer some unique and collectable goodies. International restaurants and quality food is all around and never far away! Often the menu is displayed on a large board out on the street. Many of these places are near the plaza - you can eat lasagna, cesar salad, lamb chops, grilled salmon, pastas, quiche, salads, a cheese board and vegetarian meals without having to look too far. Villa de Leyva on these travels of mine in Colombia has the best food out of all the cities I went to by far! The late afternoon in Villa de Leyva offers a good opportunity for black and white photography when the shadows of the streetlamps and balconies fall across the whitewashed building facades. Parks and churches in Villa de Leyva include Parque Antonio Nariño, Parque Ricaurte (parks) and (churches) Iglesia del Carmen, Claustro de San Agustin (1594) - Villa de Leyva's first church and Capilla San Francisco. You'll find them all while you stroll the cobblestone streets!

In and around Villa de Leyva there are 9 museums! Casa Museo Luis Alberto Acuña - houses the works of this 20th century painter and muralist. Museo Prehistorico - a small private collection of fossils and related paintings with a Jurassic park in the garden. Casa Museo Antonio Nariño - was home of this major independence leader, see his writing desk etc. Museo El Fosil - millions of years ago Villa de Leyva was under the sea and many fossils have been discovered. Museo Antonio Ricaurte - home of local independence war hero with nice gardens and flowers. Kosmos Museo del Espacio - highlights the astronomical observations of the Muisca culture. Museo Paleontologico - an impressive collection of fossils found in the area. Parque Arqueologico de Monquira (El Infiernito) - a pre-Columbian archaeoastronomical site. Museo del Carmen - considered one of Colombia's finest collections of religious art.

If there is one must-see attraction in Villa de Leyva, surely it has to be the amazing Casa Terracota (The Terracotta House)! I rented a bike and rode there from town, it's only a 1km ride. Entrance costs $10,000 pesos ($3.50USD). The Terracotta House was built by Colombian architect Octavio Mendoza Morale in the 90's. You would describe the house as the biggest piece of pottery in the world. The idea was to cook a house from soil, air, water and fire and to use ones own hands with the help of agricultural tools. It is a life-long project that will continue growing and is open for people to join with Octavio to design new objects for the house! Starting outside the front of the Terracotta House are the gardens with ceramic statues and out the back is a duck pond. Through the front entrance to the living area and kitchen and up the stairs to a large bedroom and grotto-shaped bathroom. There are various patios on all sides with different views from each one. The back patio has stairs leading up to the fantastic roof patio where there are variuous works of art, cactus plants and a space-age looking skylight with round windows. Views of the beautiful green countryside are awesome up here. Enjoy the Casa Terracota!

Near Villa de Leyva is the Sanctuary of Flora and Fauna Iguaque, buses leave from the bus terminal early in the morning from 7am. The sanctuary is known for its flora and fauna as well as its sacred lagoons at the top of the mountain. It takes 6-8hrs to hike up and back down to and from the lagoons, you must be inside the park before 10am if you want to do this challenging hike! There are actually 7 or 8 lagoons at the top of the mountain, camping is possible too. In only certain sectors of the sanctuary will you see the fauna (the sectors far from human interaction). For me personally I didn't plan to hike all day up to the lagoons at this kind of altitude (2400m - 3800m). I arrived at the same time as a busload of teenagers, they charged up the hill and I was left for dead, by the time I arrived at the entrance to begin the lagoon hike they were already 90mins ahead of me! I was at the park to just enjoy the walk and to look for interesting plants, flowers, birds and insects. Which I did find some!

From Villa de Leyva I travelled south to Zipaquira to see the salt cathedral, 3hrs bus.

A pair of elder locals of Villa de Leyva in Colombia, a woman & her husband. I asked if I could take their photo while I gave them a big smile. Afterward I asked if they would like something to drink! #people #Colombia #Travel https://t.co/jcPK7K0Sef pic.twitter.com/gYAYAVxuKU

The menu of a restaurant in Villa de Leyva with bbq, fish, ceviche, trout, lasagna and more - Carnes y Olivas Restaurante. The food is very good as is in Tunja also! The prices are great too, at least half the price as it is in southern Chile. #food #menu #restaurant pic.twitter.com/EjFOla67VW


View all photos in the Villa de Leyva Photoset 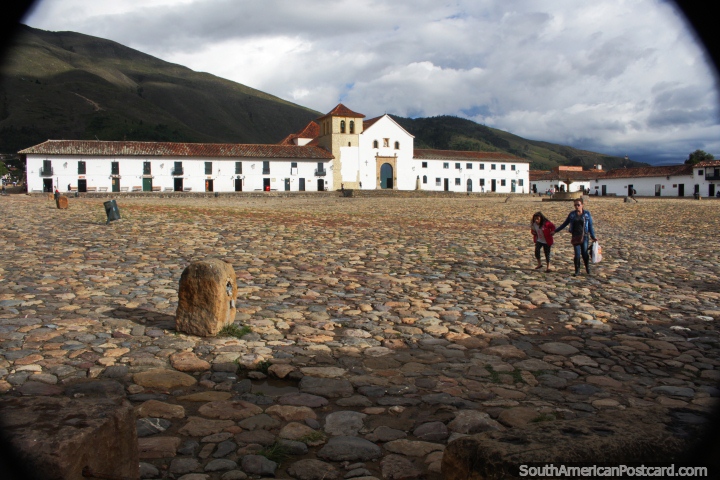