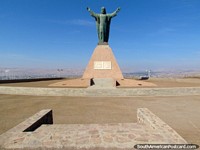 The great Jesus statue at the top of El Morro de Arica, headland. 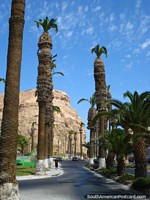 Trees and headland of Arica. 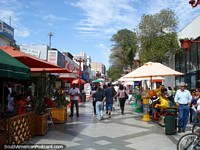 5 times I have come to Arica, stayed or passed through. Almost always either coming from Tacna in Peru or Iquique further south in Chile. On one occasion I flew up from Santiago. Arica has a kind-of desert feel to it. At the ends of the streets in the distance you see rock mountains and hills. Paseo Peatonal Thomson is where the markets, shops and stalls are.

Around the plaza are the famous tall trees of Arica. The area is very nice with a park, fountains, walking bridges, paths to walk and the open sea breeze. The water from the fountain shoots up to form different patterns and is very nice. On a tall orange poll stands a bust of Cristobal Colon which is the Spanish name for Christopher Columbus. Also closeby is a church - Iglesia de Mision Permanente and another statue, this time of a man standing holding a musket, it says El Roto which refers to a person of poverty. Nearby is an old steam train and a statue of Gabriela Mistral, she was the first Latin American to win the Nobel Prize in Literature. Across the road from the plaza is the naval base in the white building with the title Armada de Chile. Nearby is a statue of Captain de Frag. Don Arturo Prat Chacon, a naval officer, standing with his sword held up towards the sky. A big black canon sits beside a lamp and palm tree on a grass area. A monument of a man on a horse is Bernardo O'Higgins (1778-1842) who was a leader for independence in Chile.

From the plaza you can see the great headland El Morro de Arica with the flag of Chile flying at the top. Wait until the mid-afternoon to walk up to the headland so that the sun is in the best position for taking photos. Walk up the path from the big yellow monument that you can see at the top of the sidestreet off of Paseo Peatonal 21 de Mayo. You start getting some great views pretty quickly. At the top is a museum Museo Historico y de Armas. Around the walking area at the top are a few sights including a cannon, flag, busts of important figures and of course the big Jesus statue. Vultures buzz around the skies beside the hill high above the city below.

The border crossing from Arica to Tacna in Peru is very easy. I've done this 3 times now in this direction, twice in the other direction. Go to the international bus terminal in Arica and take a co-op taxi to Tacna. They stop at immigration and passport control along the way. It takes around an hour to complete and is very simple and easy.


View all photos in the Arica Photoset

Hostal Venecia, Arica, Chile (May 2010 - 1 night) - This place was good for the night, the room was simple but fine, shared bathroom and not expensive. In the center of Arica.
Chile Travel Blog | Photos of Chile | Festivals in Chile | South America Videos 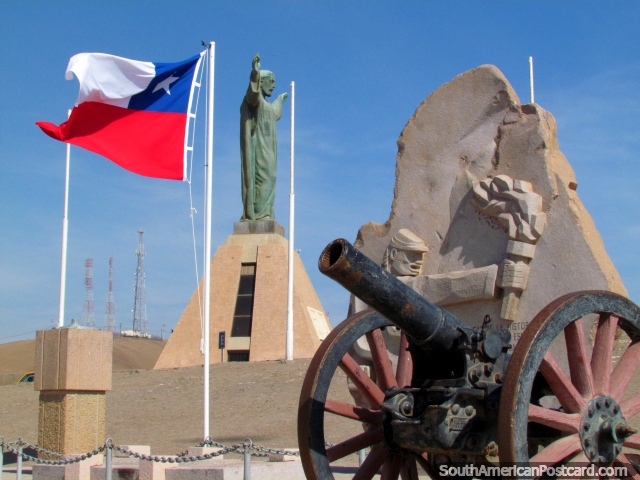