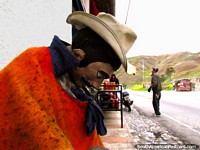 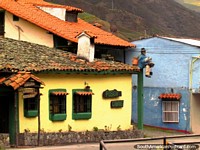 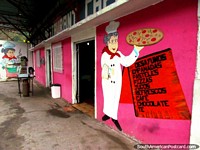 The pink restaurant and mural in the town of Biguznos/Pedregal.

In the late afternoon I took some time to explore the place. The plaza and white church are located on the left side heading up the road and has a bust of Simon Bolivar. Across the road from here I found a couple of painted wooden doors with pictures on them, one a pair of cowboys, the other of a dance hall scene. Some of the shops have model human-looking figures sitting outside, kind of like La Boca does in Buenos Aires - Argentina.

There is a river running through the town and lots of bright colored flowers everywhere - I didn't know flowers could survive at 3342 meters above sea level! I walked past what from the road looks like a castle, it's actually Hotel Parque Turistico Apartaderos and it looks pretty flash indeed. It has a small cobblestone waterfall fountain outside the front called Fuente Don Placido. 4 young local boys on horses then rode out of the place, across the road and back to their farm. I guess they had been giving rides to the visitors at the hotel. Some of the roofs and chimneys of the houses along here have little ceramic figures on them, they look like little voodoo creatures or something. The tiled roofs with the mountains in the background make a nice backdrop at the top of the town. While I walked back down to my hotel I passed the school on the left and a pizza shop on the right.

I bought a pizza to take back, this would be dinner and breakfast, it was good too! It's cheaper to eat it there than take it back though because they charge you for the box.

After a nights rest very early the next morning I went to explore the area more. I had seen some other cool little communties on the bus journey up from San Rafael de Mucuchies the day before. I wanted to walk from my hotel all the way down for a few kms to see them and enjoy the beautiful mountainous countryside I was in along the way. From San Isidro de Apartaderos I walked down the road passing farms and farmhouses, cold rivers with bright green banks, rock gardens and rock walls and people picking crops. A stone statue of Jose Claudio Perez Rivas (1928-1999) erected by his wife, children and grandchildren stands in a little cobblestone plaza with boulders and colored flowers of pink, red, yellow and orange.

I passed a pink restaurant and huge mural of a turkey, this is the community of La Biguznos / Pedregal. Strawberries and all kinds of bottled products are for sale on the roadside around here. The river running down beside the road makes for a very picturesque scene.

I'm now in a place called La Mucuchache where on the rooftop of a posada sits a figure of a bearded man with a hat and walking cane. A pink and white church with 3 bells called San Jose de la Sierra stands on one side. La Mucuchache is the name of the indigenous people who used to live here.

The next and last little place I came to was Cambote where I was surrounded by beautiful countryside and in the valley sits a pink farmehouse with a wooden waterwheel.

By this time I was frozen to the bone because I had inadequate clothing on to say the least. I was wearing shorts, a t-shirt and a cap because I had been up on the hot coast the week before. You need a woolen hat, jeans and a jacket, that's my advice. It was now raining and I waited for ages for a bus to come - about 40mins. None of the locals were keen to give me a ride when I stuck my thumb out a few times either. When I got back to the hotel I enjoyed the hottest of hot showers and ate my pizza.

From San Isidro de Apartaderos I took a bus 10mins up the road to the junction at Apartaderos on the hill above the town. From here I took a shared taxi 1hr 20mins (55kms) north to Timotes for the night.


View all photos in the San Isidro de Apartaderos Photoset

Posada Indio Tinjaca, San Isidro de Apartaderos, Venezuela (August 2014 - 1 night) - At over 3500 meters above sea level it was freezing outside. Luckily they provide a heater for the room and have the hottest water available for showers, it was fantastic! In a beautiful setting just down the road from shops and a pizza shop. I had a tv but no wifi. The price was very reasonable at $600 Bolivares (less than $10USD on the black market). I bought a pizza up the road for dinner and heated the rest up on the heater for breakfast. Recommended.
Venezuela Travel Blog | Photos of Venezuela | Festivals in Venezuela | South America Videos 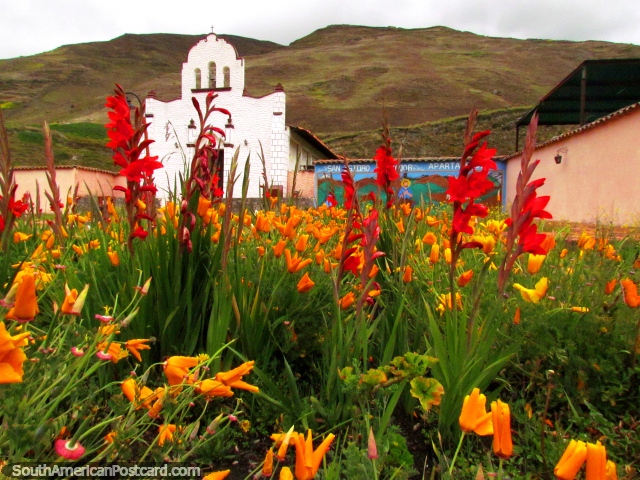