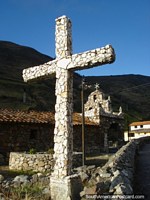 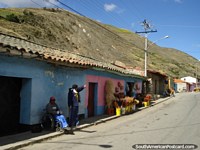 Colorful feather things for sale at the roadside on the El Paramo road. 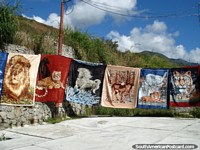 Images of lions and tigers on warm blankets sold in the highlands near Merida. 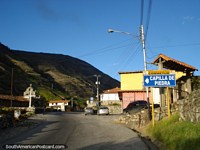 I thought a day tour to the area around Merida called El Paramo sounded great, and yes, it turned out to be one of the best things I did in Venezuela. The scenery is amazing with mountains, lagoons, Andean towns, mind-blowing landscapes, churches, monuments and interesting things to see along the Transandina roadside. It cost 350 Bolivares which is about $45USD at a good rate of exchange. There was just 2 of us and our guide, so it was a relaxed and fun day and we were able to customize the day for the things we wanted to do and see the most.

At around 8:30am we left Merida and headed into the hills in the jeep towards the towns of Tabay, Mucuchies, San Isidro de Apartaderos and Apartaderos, we were lucky, we got a perfectly sunny day after a couple of days of rain before that. Our first place of interest as we ascended slowly into the hills was a small town that has a big monument of 5 eagles built inside a traffic roundabout. Soon after that while passing a forest of bearded trees beside the road we came to the town of Mucujun. At this point we are 17kms from Los Aleros, 38kms from Mucuchies and 66kms from the Collado del Condor.

Tabay Valley for a Bite to Eat

We now descended down the valley into Tabay, a quiet and peaceful place with beautiful mountains all around, this is where we stopped for a quick break to have a cup of coffee and bite to eat, this is 8kms on from the distances mentioned above. We continued on in the jeep, a few minutes later I noticed a sign pointing to some hot thermal springs, but we didn't stop here, we had decided to make our way to a lagoon in the mountains for a swim instead. As we continued climbing steadily into the hills beside bearded trees, valleys and small settlements there became a familiar sight of people selling big colorful blankets at the roadside as well as other types of crafts and souvenirs. There were people standing on the side of the road selling puppies and stalls sold fruit and bags of garlic.

El Pedregal for Arts and Crafts

We now made our way to El Pedregal de Tabay and past a park called Parque El Pedregal, there are many arts and crafts shops on this leg and many colorful warm blankets for sale at the roadside, most depicting an animal design. The scenery is magnificant with the green hills, valleys, rivers and farms. A farmer ploughed his field using a pair of cows. We came to a settlement called Cacute. There had been a mudslide by the look of the debris on the road. Mucuchies was now 20kms away, Apartadero 32kms and the Observatorio 32kms.

The next place we came to was called Escaguey where you could go fishing for trout or just eat some at one of the restaurants. Fish is a typical meal in this region as well as strawberries with cream.

Colorful Houses and Flowers in Mucuruba

We now came to Mucuruba, a small town with colorful purple and red flower trees and a white monument in the shape of a candle with an orange light on top. The colorful houses with green mountains in the background make a pretty picture. We passed through the narrow streets and came to the park / plaza with a tan colored church on one side. A few minutes later there was a lightblue with gold church. We passed a garlic stall and were now 7kms from Mucuchies, 19kms from Apartaderos and 24kms from the Observatorio.

Ascending the Hills in Misigua

Misigua was the next settlement we came to and shortly afterwards we began our ascent in the jeep up to the point where we would walk in the hills to a lagoon called La Musuy to have a swim. The scenery here is truly beautiful and amazing. This is where we began a 40 minute walk up and along a hill to reach the special lagoon to have a swim.

Swim at a Secret Lagoon

This lagoon was not officially part of the tour, but we had decided to forfeit visiting another lagoon for this one. This really did seem like a secret place as my mate, myself and our guide hung out and lay in the water high in the hills. But lo and behold 3 young Venezuelan ladies knew about this place too and arrived to bath in the lagoon water, this was great and they were very friendly too!

Castle on the Hill in Mucuchies

After nearly an hour at the secret lagoon and after hiking back to the jeep, we headed down into Mucuchies, a few minutes away. We stopped at Plaza Bolivar, a nice big open plaza with monument of Simon Bolivar and a shepard with a dog. On one side is the big white and gold church with single bell and clock tower. There is another monument inside a garden called San Isidro where a man is kneeling and an angel ploughs the land with cows. We now head out of town where just a few minutes on is the big castle on the hill above the road, this is Hotel Castillo San Ignacio.

Soon we passed through La Toma with its arts and crafts, dolls, blankets, hammocks, cane baskets and warm clothing for sale. There is a little church there with round portholes and stone pillars. Now we were on our way to Apartaderos, there are posadas (guesthouses) in the area round here for those who want to stay for a few days. Through Cambote and La Mucuchache, strawberries and cream, church and plaza, colorful feather things for sale, stone cross and wall art. In a field there is a wooden and stone water wheel.

Now we were in Apartaderos, a nice little place with color, there is a hotel that looks a little like Legoland. Nearby is a park called Parque Loca Luz Caraballo. The crazy Luz Caraballo is a character in the popular culture of the Venezuelan Andean region, especially in the state of Merida and immortalized in literature by the writer and poet Andres Eloy Blanco. The park has an elevated plaza and steep stairs, the oxygen level is low at this altitude, there is a monument of Luz Caraballo also.

Observatorio Area has Pousadas and Hostels

A few minutes on and we start to ascend up towards the Observatorio, there are various posadas and places to stay around here including Hosteria Mucubaji. We are now at an altitude of 3600 meters above sea, the average temperature is 12 degrees but sometimes gets down to 0. There are many nice towns to visit around the area and things to see including Pico El Aguila, Mucubaji Lagoon, The Antier Venezuela, the Mountain of Dreams and Park Valle Hermoso.

Next stop for us would be the Collado del Condor where we would see a condor. This is 12kms past the Observatorio. We travelled up the winding road through La Asomada past a church and children playing soccer, the locals wore warm cloths. The entrance to the park of the condor is spectacular with its river full of rocks and boulders. Locals tending to crops in the field beside and rock mountains make a great backdrop, this is Parque Nacional Sierra de la Culata. This is a nice place to spend some time sitting down and enjoying the wilderness and to see the 3 meter wingspan of the 2 condors that are kept here.

Laguna Mucubaji - Lunch at a Lagoon

After this we drove on for another 10 minutes and arrived at Laguna Mucubaji. Before visiting the lagoon we had lunch in the restaurant there. There is a shop that sells local types of sweets also. The distance from here to Merida is 60kms, Santo Domingo is 21kms and to Barinas is 97kms. The lagoon is quite large and is a nice place to sit in the sun, walk around or just relax.

After a short time we began to make our way back towards Merida. On the way we would be stopping at the stone church in San Rafael near Mucuchies called Capilla de Piedra. It is made from thousands of pieces of stone by a man and his wife Juan Felix Sanchez and Epifania Gil. There is also a big stone cross there and during the drive to get there I saw a stone statue of a man called Jose Claudio Perez Rivas, an important person in the development of the region. The monument was put up by his relatives. The end of the day had arrived, the light began to dim as we made our way back to Merida. I was thrilled with what I had seen and done on this day, it was unforgettable!


View all photos in the El Paramo Photoset 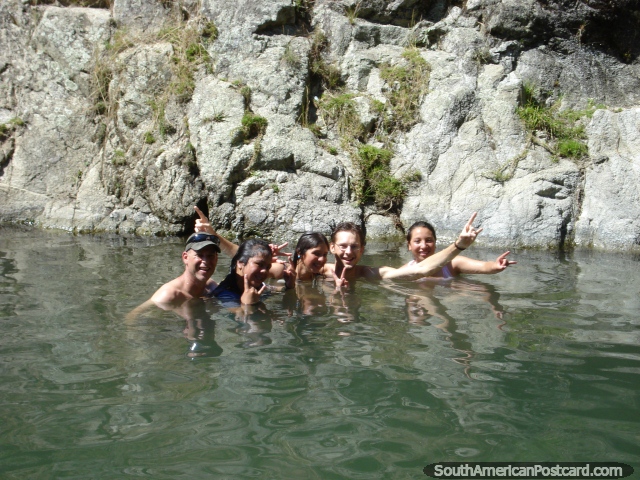