Coro to Puerto Cabello, Venezuela - Bus Along The Coast (258kms) 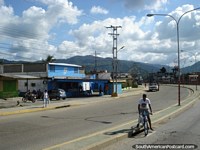 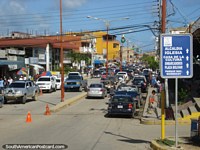 The busy streets of Tucacas on the coast. 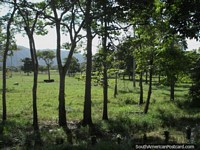 Trees and farmland between Yaracal and Moron. 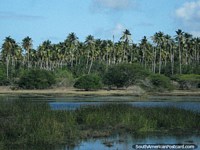 Thick greenness of the marsh and the palm trees between Tucacas and Moron.
Map location: Coro to Puerto Cabello, Venezuela

It was the 31st of December 2010 and I thought I would head from Coro to perhaps Valencia for the night, then I thought 'no, big cities are hard work'. So I thought I would get off the bus in a place called Moron which I did. But after racing around town in a taxi looking for a hotel with a spare bed and finding none, I decided to go a short way east to Puerto Cabello. I was glad I did after I discovered that Puerto Cabello was a little town beside the sea.

The bus from Coro to Moron takes 3-4hrs and it is only another 15 minutes to Puerto Cabello in a local bus from there.

The road between Coro and Morrocoy National Park / Tucacas is fairly uneventful as far as sights go, just countryside, small towns like Yaracal and El Tuque and art shops. A boy brought a turkey onto the bus to take to a new years celebration. In Tucacas there is a big spider shaped monument in a plaza.

After Tucacas is where the road brought us to the coast and sea and the scenery along here is much more interesting. There are thousands and thousands of palm trees between the road and the sea and they continue all the way to Moron, this leg takes about 25 minutes.

In Moron I walked around a while looking for a place to stay then I tried in a taxi but there was absolutely nothing available. A policeman suggested I go to Puerto Cabello, so I found a bus and boarded. Moron was a hot and busy place especially on this day.

I didn't know anything about Puerto Cabello, it just seemed like a good place to go. Along the way you see the oil pipeline along the roadside and there is big oil refinery on the lefthand side. There is some murals on some of the walls beside the main road including one of yellow, red and lightblue of Gandhi, Jesus and Martin Luther King.

I got off the bus in central Puerto Cabello and walked 10 minutes or so further into the city towards the sea. The bus driver had told me to be careful. The place was not particularly attractive along the streets I was walking on and it was seriously hot and sweaty but I just wanted to find a cheap hotel and shower. The next day would be fun for me when I would go for a stroll for several hours around the streets and see some of the historic sights. I did this coastal trip again in 2014 from Coro through Puerto Cabello and on to stay in Moron so that I could visit Morrocoy National Park.


View all photos in the Coro to Puerto Cabello Photoset 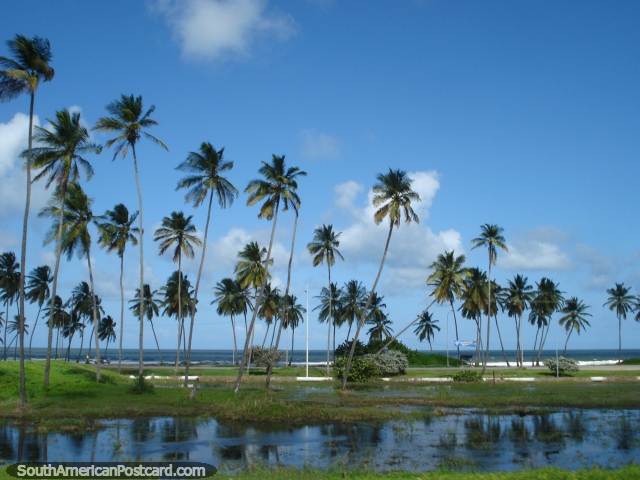