Merida, Venezuela - City Guide To The Tourist Center In The Mountains 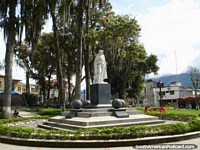 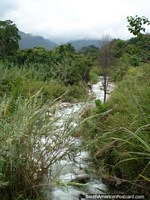 The river that runs through Merida city. 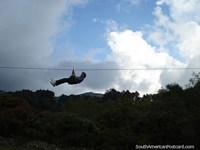 Flying horizontal on the trapeze at the botanical gardens in Merida. 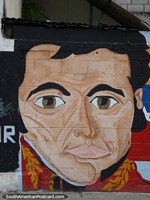 I left San Cristobal to get to Merida which took 6hrs by bus. I bought some fruit for the journey from the fruit stalls right outside the bus terminal. A couple of hours into the ride there was some major damage on the road just as we were approaching the town of Lobatera. An hour later we came to a police checkpoint and everyone had to get out of the bus and line up for ID identification. Afterwards we continued on towards a place called La Tendida. The countryside is very green and hilly with trees and rivers. We were now heading in the direction of El Vigia, the Mexican Circus had tents set up in a field, 20 minutes later we passed through a tunnel. After this point the scenery becomes more interesting out on the righthand side with a major gauge as the bus cuts east across the mountains to Merida. There is a place selling slices of rock and beside it is a meat stand with meat hanging up as well as a bunch of pigs heads. A short time later the road becomes much closer to the gauge and the river at the bottom is in view. It's very beautiful and there are cactuses growing all around, we are now 20kms from Ejido and 25kms from Merida. A few minutes later there is a funny looking monument on the right of a figure holding a bowl, it is pink in color and looks like it is made of ceramic. It wasn't too much longer and we arrived in Merida. I shared a taxi with a local to the center of Merida and saw a lot of street art on walls on the way to a posada (guesthouse) in the center of Merida.

Merida is one of Venezuela's highlights with many things to do in the area and region. The city itself is not so attractive and there are places you should not go walking around in like the slum across the river and some streets in the center, but in general it is safe. There are a few nice things to see around the city like plazas, parks, monuments, churches and statues. I set out to explore Merida one day and discovered many interesting things.

From my posada on Avenue 2 I set off up the hill to the big plaza called Plaza Sucre, the plaque has the name (in full) Plaza Gran Mariscal de Ayacucho - Antonio Jose de Sucre (1795-1830), he was a Venezuelan independence leader. The plaza is a nice area with paths and lamps, benches to sit on, tall trees and a monument in the middle. Around the plaza are shops and restaurants, on the left side of the plaza across the road is a mustard colored church Iglesia de Milla.

Afterwards I headed up the street at the top of the plaza to find another plaza I knew of called Plaza Charlie dedicated to the great comic actor Charlie Chaplin, it is a small plaza with a statue of Charlie holding a walking stick and wearing his hat. Behind him stands a single tree. Across the road there's a bust of Dr. German Briceno Ferrigni - a lawyer, writer and diplomat.

I headed over the river at this point along a not so central road and found the bullfighting stadium called Plaza de Toros - Roman Eduardo Sandia Briceno. I now came to a main road at the top of Merida city and started to head down. I passed the university Universidad de los Andes - science, economics and social. There are a few monuments to people and the walls have various street art on them, some political and some paintings of Simon Bolivar. Simon Bolivar is everywhere in Venezuela, most cities have a Plaza Bolivar. In a park there is a bust of Maria Teresa Rodriguez de Toro y Alaiza (1781-1803), she was the wife of Simon Bolivar. Nearby I found a statue of Antonio Nicolas Briceno (1782-1813), a Doctor and Congressman. Now as I headed down the road I crossed over to the left side and came to a park. It didn't look like it would be a safe place for a night-time stroll. But there is an interesting monument there, the plaque says Paseo de la Lectura. There are 2 bronze men sitting on a park bench, one is Don Tulio Febres Cordero (1860-1938), the other is Gabriel Garcia Marquez (born in 1927 according to wikipedia, but 1928 on the plaque, and still alive), both men writers.

Over the Bridge to Town

At this point I made a left across the big bridge over the river to head back into the city center. On a wall is a big painting of a bleeding bull, the words say 'no more violence, not sport, not art, not culture, it's torture'. Up the road I went in search of more sights. I came to a park and plaza, Parque Glorias Patrias and Plaza Vicente Campo Elias (1759-1814). Across the road as part of the same park is Plaza Jose Antonio Paez (1790-1873). These 2 men were both involved in the War of Independence against Spain. Here is a cool 360 degree interactive of the park. Both plazas have nice pathways, bearded trees and park benches with grand monuments in each.

There are many churches in Merida. I found my first one beside Plaza Coronel Rangel, kind of pink and cream in color with red details and steeple. The plaza is quite attractive with trees. There is a monument in the middle of Coronel Antonio Rangel (1788-1821), he was an important figure in the independence war. I wandered around the streets where there is much interesting street art on walls and people going about their daily business, markets, street stalls and shops etc.

I was now at Plaza Bolivar, the cities main plaza and park. It has nice gardens and trees and the cathedral is beside it which was built between 1803 and 1960. It wasn't open when I was there but here are some pictures of the inside. A monument of Bolivar on his horse holding a sword stands in the center of the plaza. The people of Merida enjoy this area where you will find pigeons to feed, food stalls, spraycan artists, a musical pipes stand and Cepillados (refreshing flavored shaved-ice). Nearby the plaza I found a statue of Manuel Mujica Millan (1897-1963) - an architect. I continued my walk seeing at least 3 more churches and made my way back to my posada. Merida in many ways feels and looks like it could be a place in Ecuador by the way the streets look and with the mountains all around in the distance.

On another day with some friends from my posada we went walking around town on our way to the Botanical Gardens, we were in the area where several tour companies are located, one being Fanny Tours, they offer many tours and activities including paragliding, rafting, cayoning, mountain biking, canopying, trekking, horseback riding and moto4x4 as well as visits to places such as Los Nevados, Los Llanos, Paramo Valleys, Catatumbo and the hot springs. I also saw the Tour Agency Yagrumo office, they offer tours and activities similar to those listed above. While my friends were inside talking about a tour I went for a quick walk and found Plaza Las Heroinas, it features a fountain with a monument in the middle of 5 woman, most have the name Maria. Maria Simona Corredor, Maria Isabel Briceno de Fornes, Maria del Rosario Navas, Maria Ignacia Uzcategui and Anastasia. In a taxi the 4 of us headed to the nearby Botanical Gardens known as Jardin Botanico de Merida where we spent the next few hours. It is a beautiful area with themed gardens such as the rose garden and oriental garden, many species of flowers and plants and also it has a great activity of canopies in the trees with bridges and ladders and a flying fox at the end. The total area open to the public is 8 hectares (out of 44 hectares) and the altitude is at 1850 meters. Some of the names of the flowers you will see have names like Avispa, Mariposa, Coralito, Torito, Pico de Loro, Tigrita and many more, there are signs with details about each type of flower as you walk along the paths. After a pleasant walk around the gardens we came to Senderos Aereos where there is an amazing series of rope bridges and platforms set up in the trees above. They provide helmets and safety equipment. There are 3 levels of difficulty you can choose from, the most simple takes 30mins with 3 platforms, the next takes 45mins with 5 platforms, the most extreme level takes 1hr with 7 platforms. People were up in the trees at various different stages in the course, there were helpers stationed at each platform after each person comes across the rope bridges. At the end platform a flying fox brings you back down to earth over the trees and through the fauna and rock gardens. The Botanical Gardens of Merida I would definitely recommend, it is 5 minutes in taxi or bus from the center of town.

I was now looking forward to the El Paramo tour I would do a couple of days later.


View all photos in the Merida Photoset

Posada Alemania, Merida, Venezuela (December 2010 - 10 nights) - Good location in the center of Merida and a good price, there is a kitchen available to use and there is wifi internet, private rooms or dorms are available, the staff were helpful and friendly. Semi-indoor/outdoor courtyard and plenty of space.

Habitaciones Para Turistas, Merida, Venezuela (December 2010 - 4 nights) - In the center of Merida near shops, bars, restaurants and sights. Has a relaxed feel and food is available to order. Tours are offered from the front desk. A good price for a backpacker.
Venezuela Travel Blog | Photos of Venezuela | Festivals in Venezuela | South America Videos 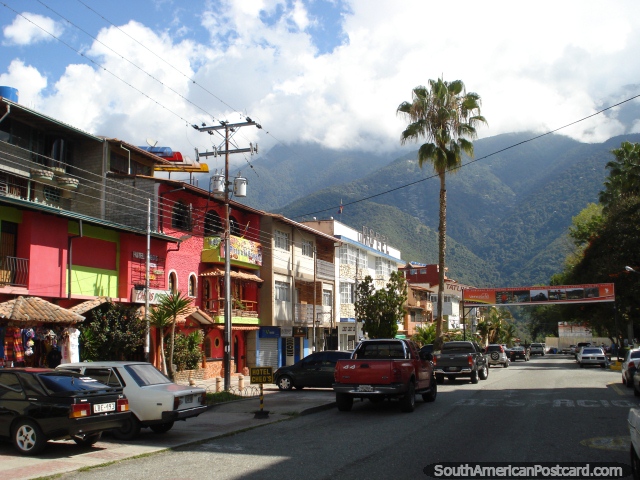