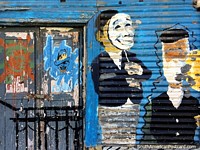 Derelict but artistic, street art on an old door and corrugated iron building in Buenos Aires.

Luis Braille (1809-1852), creator of the braille system of reading for the blind, statue in Buenos Aries.

Has there not been anybody since Maradona who is as famous as Maradona? No. A bar in El Caminito, Buenos Aires. 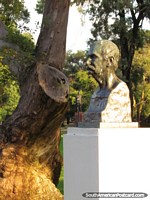 I arrived in Buenos Aires on my first trip to South America not knowing what to expect apart from tango dancing and cheap steak. Since then I have visited Buenos Aires many times, each occasion loving it more. The San Telmo neighborhood is a good base to explore the city and is central to many sights and activities. Buenos Aires is a big and busy place but you can see a lot by walking, renting a bicycle or taking a bus, taxi or train. It's a great place for shopping, studying Spanish and for leading a social life. There's plenty of statues, monuments and architecture to look at around the city especially along Calle Florida.

La Boca is tourist central in Buenos Aires, it's like a Disneyland of Argentinian culture where the streets are very colorful and feature art, bohemian and cultural figures, brightly painted houses and so much more. Don't miss it!

Around the city you will see dog walkers with often 8 - 10 dogs, that explains why the footpaths have obstacles on them.

It's easy to catch the ferry across the Rio de la Plata to Colonia del Sacramento in Uruguay for a daytrip for an escape from the bustle.

The great thing about Buenos Aires are the many very different neighborhoods. Recoleta is an upmarket area full of cafes, shops and art galleries, while Palermo Viejo is perfect for walking amongst nature and having picnics. San Telmo where I have stayed on 3 occasions displays much traditional culture, while by the river the area of Puerto Madero has some great nightlife, clubs and restaurants.

On Sundays go to Plaza Dorrego for an exciting fair with performers in the streets.

Eva Peron made her famous address to the workers in Plaza de Mayo in 1945 from the balcony of Casa Rosada. Casa Rosada is a sight in itself!

You can find several interesting museums in the Belgrano district, in fact there are several museums in all districts, you are never far from a museum in Buenos Aires.

For a real taste of how much the Argentinians love their soccer, check out a game at La Bombonera Soccer Stadium in La Boca!

The district of Recoleta has the grave of Eva Peron at La Recoleta Cemetery. It's an amazingly prestigious cemetery with many presidents, actors, writers, politicians, generals and military officers buried here. The grave of Eva Peron (with her family) is the most visited grave in all of South America, the family name is Familia Duarte.

In the Palermo district is the botanical gardens Jardin Botanico Carlos Thays which are very nice with many trees, open spaces, statues and art (27 pieces), water features and cats roaming around. Gardens include those from Africa, Europe, France, Oceania, Asia, America, Roman and a butterfly garden. It opened in 1898. Carlos Thays (1849-1934) was a French-Argentine landscape architect.

Across the road from the botanical gardens and Plaza Italia is Buenos Aires Zoo, the entry fee for adults is around $10USD. Buenos Aires Zoo is quite big, you can easily spend 2-3hrs wandering around seeing all of the animals that live here! Pink flamingos, brown bears, polar bears, lions, tigers and other cats, monkeys, tapir, llamas, bison, elephants, camels and so many more. There is also a reptile house with some big snakes like pythons and boa's.

Buenos Aires has some lovely parks. The huge park called Parque Tres de Febrero is outstanding, a beautiful space to enjoy. Here you will find the Poets Garden full of monuments of famous poets such as William Shakespeare, Amado Nervo, Ruben Dario, Alfonso Reyes and many others. The park also has rose gardens, a Greek bridge, a lake and island, patio and pavilion.

Tigre is a beautiful part of Buenos Aires. From Retiro train station in the center of the city take a train northward. It takes less than an hour to get to Tigre. You can then enjoy a boat excursion around the waterways and rivers. It's absolutely beautiful and you can stop to relax for a while and get back on another boat. Tigre is a highlight of Buenos Aires indeed!

In September 2013 I spent 3 nights in the city and had 2 days of sightseeing. I stayed in a different part of town than I had before, about 1km from Plaza Congreso. My first day of sightseeing was actually cut short due to a problem with thieves.

While I was at Plaza Congreso which by the way is an absolutely amazing space full of art, artists painting pictures and is surrounded by fantastic buildings like the Congress Palace.

I Hurt My Arm in Brazil

So, let me tell you the story! I had arrived in Buenos Aires this time by plane from Sao Paulo in Brazil. I had hurt my arm while there and had it in a cast. Well actually on the plane I took the cast off and was now using a sling. What happened to me next while walking around Plaza Congreso is an old trick usually done to tourists in Peru in places like Cusco and indeed it was 2 Peruvians trying this on me.

And Became An Easy Target

I was an easy target with one arm in a sling and the other holding an expensive camera. I was walking underneath a large tree, there were pigeons on the ground all around. Next thing a knew the pigeons went crazy flying everywhere and some stinky liquid came down all over me. Suddenly 2 people, a man and a woman were right there saying that the pigeons had pooped on me and that they could help clean me up. Suddenly without warning they were cleaning me with tissues and water. The woman was behind me, the man worked on my legs and while he was cleaning he was pushing my wallet up and up and out of my pocket. Haha, luckily by the time he had my wallet half out of my front pocket he could see it was attached to a chain that was attached to my belt. I was holding my camera tightly during this of course, my other arm was useless.

After realising they were not going to be getting anything from me they left very fast, each in a different direction. I knew what was going on during the process but it all happened so fast there was not much I could do. Whatever it was they threw on me absolutely stunk, it was like vinegar or something similar. I went back to my hotel after this for a shower and called it quits for the day. Overnight my arm made a miraculous recovery and I was now able to hold my camera with both hands again and not look like an easy target for thieves. I had a fantastic day of photography this time, walking for 7hrs and somewhere between 12-15kms around the city.

I said to myself that I would not take so many photos of statues but that is very hard to do in Buenos Aires because there are 100's and 100's of them everywhere. I wanted to look for street art, architecture and interesting facades, that kind of thing. I wasn't disappointed. I found a ton of street art and many awesome murals. I saw some great plazas and parks including Plaza Lavalle, Plaza Libertad, Plaza San Martin, Plaza Fuerza Aerea, Plaza Roma, Plaza de Mayo (again) and the Plaza de la Constitucion.


View all photos in the Buenos Aires Photoset

Babel Boutique Apart Hotel, Buenos Aires, Argentina (November 2019 - 2 nights) - A fabulous place to stay indeed! Babel Boutique Apart Hotel in Buenos Aires is just super and is located in the San Telmo area. A great price at $28USD for 1 person in a big beautiful and clean room with a huge bed. A nice bathroom to the side, tv and wifi. Breakfast is included! I enjoyed staying here for 2 nights and look forward to coming back next time I'm in town. Recommended!

Plaza Hotel, Buenos Aires, Argentina (October 2015 - 3 nights) - The Plaza Hotel Buenos Aires is very posh and is located beside Plaza San Martin in the city center. I got a good deal at a little under $100USD per night which didn't include their fancy buffet breakfast, that is an extra $28USD per person or you pay more to have it included in your room rate. Free wifi however was included in the rate that I payed. Beautiful rooms and very comfortable with bath and shower, fridge, cable tv, cot for the baby, writing desk and a nice big bed. Plaza Hotel has a very professional atmosphere with doormen opening doors for you and everything else you could imagine. If you are feeling rich or actually are rich then this is a great hotel very close to amazing shops and not far from the underground train. Recommended.

Hotel Residencial, Buenos Aires, Argentina (September 2013 - 3 nights) - I enjoyed my 3 night stay here. Flashier than I would normally stay in. Was around $30USD per night. Big room, tv, private bathroom and wifi internet. About 20mins walk from Plaza Congreso. Recommended.

Sandanzas Cultural Hostel, Buenos Aires, Argentina (Jul 2008 - 2 nights) - I enjoyed my stay here for 2 nights, an easy going place to be with nice rooms, heaters and lots of bathrooms/toilets.

Ostinatto Hostel, Buenos Aires, Argentina (Mar 2008 - 4 nights, Oct 2008 - 6 nights, May 2012 - 2 nights) - This hostel is always nice, clean and with friendly and helpful staff and it is in a great location in the San Telmo district. They have bicycles that you can rent to ride around and explore the big city, a great kitchen and dining area with balconies overlooking the street which is a good social area as well, there is a TV and video area with beanbags and a couch downstairs. The hostel is kept clean by several ladies each day. In 2012 when I stayed here it wasn't that great due to the noise and echo throughout the place and people slamming doors. They need to do something about the echo!

Hostel Inn Tango City, Buenos Aires, Argentina (Oct 2008 - 1 night) - This is a great hostel for young people with its bar and party atmosphere, go there with your friends or to meet lots of new people. I didn't really enjoy the noise in my 10 at least bed dorm and all the computers and WIFI were down when I was there so I left and stayed somewhere else.
Argentina Travel Blog | Photos of Argentina | Festivals in Argentina | South America Videos 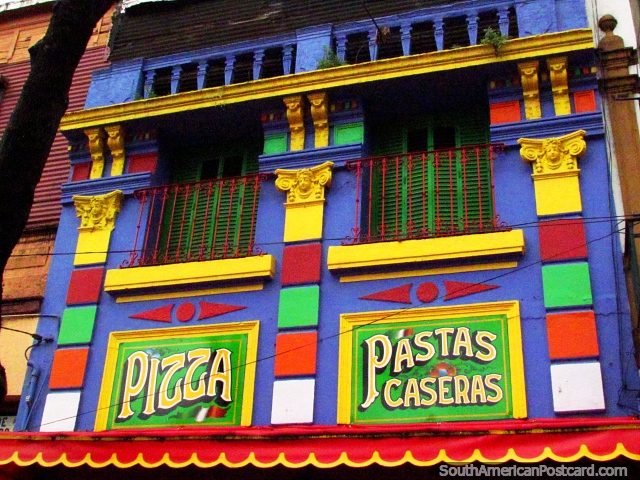