About an hour south of Barquisimeto (once you get out of the city) is the town of Acarigua. I was heading in this direction towards Barinas and the mountains north of Merida and thought I would spend a night in Acarigua and have a quick look around. A taxi from the bus terminal took me into the center with the first sight along the way being the huge statue of Portuguesa in Plaza 5 de Diciembre. Portuguesa stands upon a cannon holding a spear in each hand. The plaza is actually a traffic island and there are no seats. After checking into a 3rd rate hotel I headed to Plaza Bolivar where Acarigua's main sights are all located.

The plaza is attractive, clean and has lots of trees, the monument in the middle is of Simon Bolivar upon his horse of course. Across the road from the plaza is a very impressive mural made of tiles for the occasion of Venezuela's bicentennial. It consists of around 10 faces of famous people including indigenous chief Guaicaipuro and independence leaders and figures Francisco de Miranda, Jose Felix Ribas, Luisa Caceres de Arismendi and Antonio Jose de Sucre. On the right hand side of the mural is the cathedral and across the road is a huge tiled mural of a battle scene and indigenous people. Around the corner from here is a monument of a very important indigenous figure holding a club and spear - 'El Indio Hakarygua'.

Just one block away from Plaza Bolivar is Plaza La Burrita where there is church Iglesia San Miguel Arcangel and the monument 'Alusivo a la Aparicion' with a woman, child and donkey around a tree trunk.

At this point the sights in Acarigua around the center came to an abrupt end and I started wandering around the more outer and backstreets looking for wall murals, street art and anything else I could find which wasn't that much really - scrapping the barrel. A little boy came up to me and asked if I would take his photo and show it to him, which I did. Then his mum asked me for money for which I laughed and said I didn't even want the photo and said no. I then found another sort-of plaza with a statue between 2 palm trees of a man (with dog) holding his hand out, looked like he was asking for money also. The backstreets a few blocks out from the center were starting to get quite shabby with lots of tagging and rubbish. As far as photos go I was really starting to get diminishing returns.

Early next morning I left Acarigua and took a bus 2hrs south / west to Barinas, a city I enjoyed a hell of a lot more.


View all photos in the Acarigua Photoset

Hotel Rio, Acarigua, Venezuela (August 2014 - 1 night) - Cheap and a little bit nasty. A rent by the hour sort of place but you can stay the whole night. Had a few cockroaches and a leaky aircon system. Located in the town center just a block from the plaza. Had a tv but no remote and had no wifi. In the middle of the night at 1am the restaurant next door started playing music extremely loud and woke me up, this lasted about 90 minutes. Take it or leave it. Maybe leave it, there are other places to stay in nearby.
Venezuela Travel Blog | Photos of Venezuela | Festivals in Venezuela | South America Videos 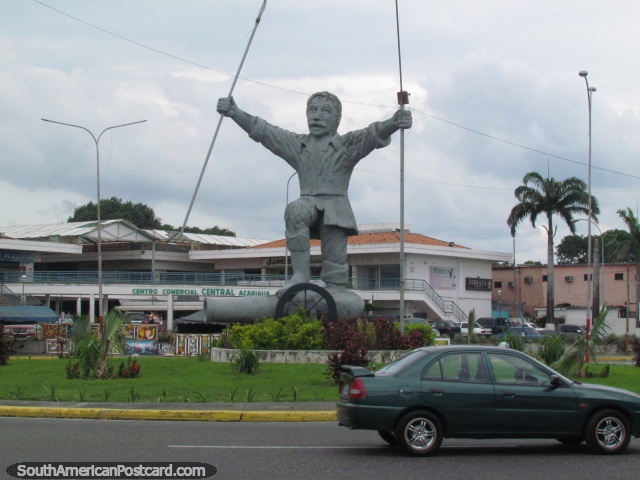