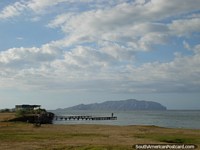 A lone fisherman at the end of a small wharf with islands in the background in Puerto La Cruz. 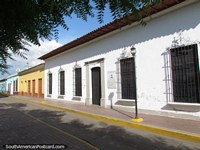 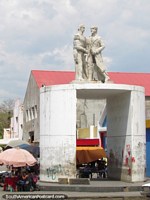 2 men shake hands Bolivar monument near the river in Barcelona. 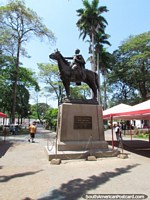 Slept in the Park in Puerto La Cruz

After a 5 hour bus journey from Caracas I arrived at around 11pm in Puerto La Cruz and shared a taxi into the town center with some trustworthy people I met on the bus. I walked around the center for a while looking for a place to stay. I found a hotel and offered to pay half price to stay until about 7am in the morning but the manager said I had to pay full price which was over $15USD, so in the end I said no and decided I would go sleep in the park instead. I walked down to Plaza Bolivar, the police had a tent station at one corner, one of them asked for a cigarette and I sat down with them for a while and they asked me questions about my travels and my country. I asked if I could leave my backpack and guitar with them while I slept on a park bench nearby and that was ok with them. The park bench was of a reasonable standard and I slept for several hours. I awoke early on the morning and collected my things.
THE BENCH

I walked for 20 minutes to the ferry terminal to catch the Conferry to Isla Margarita, the ticket price was $40 Bolivares each way. When I returned to Puerto La Cruz after Isla Margarita I spent the remaining day and evening taking photos before catching a bus at 10pm south to Ciudad Guayana.

The boulevard in front of the sea is called Paseo Colon, the area is 10 blocks wide and is full of activity at the end of each day and into the evening. There are stalls and all kinds of things to buy including jewelery, child size puppets, clothing, toys and food. There are musicians playing and cool things for kids to do like drive around in little motorized cars and play on bouncy castles, down the road a bit is a fairground with all the usual attractions and bright lights. There is a huge cross monument with lights that change color from red to blue to green, there are palm trees above. There is a park with a monument to Jose Tadeo Monagas (1784-1868), he was president of Venezuela twice in the mid 1800's. The town of Puerto La Cruz itself is a busy little place and fun to explore, there are many restaurants and tourist agencies along the boulevard. It's worth spending a night here to enjoy the activity taking place down on Paseo Colon.

I came to Barcelona from the east where I had spent a night in Mochima watching cock fighting and mingling with the locals, the bus connected in Puerto La Cruz. Barcelona is a city founded way back in 1671. I was interested in discovering some of the historical sites around the city. I enjoyed my day in Barcelona and stayed the night at a budget hotel in the center.

In the center of town are the ruins of Casa Fuerte (the fortress) which is a national historical monument originally the Convent of San Francisco. In 1811 it was converted into a fort for the city's defense and in 1817 was destroyed. In one corner of the fort adorns a statue of General Pedro Maria Freites (1790-1817) who was one of many who died in the battle that day including women, children and elderly.

Across the road is Plaza Bolivar with its many trees and monument in the middle of Simon Bolivar on his horse. Across the road from here is Plaza Miranda named after Venezuelan revolutionary Francisco de Miranda (1750-1816). Closeby is another plaza called Plaza de la Raza but there is nothing really there.

I now went street wandering and exploring, looking for old houses, buildings and things. I saw several before coming to the theater Teatro Cajigal with its neoclassical style, it has 6 arched wooden doors - 3 with balconies and was built between 1894-95. It is named after Juan Manuel Cajigal (1802-1856), a mathematician. Beside the theater is Plaza Rolando and church Iglesia La Ermita del Carmen.

I saw more colonial streets and houses as I walked in the direction of the river Rio Neveri and crossed the bridge. From here you can see the Bolivar monument - 2 men shaking hands. The area around here is not the most attractive, kind of has a market feel.

Nearby I found the historical Plaza San Felipe and the ruins of its church which was destroyed by an earthquake in 1812. Beside the plaza is a new church called Iglesia Nuestra Senora de Lourdes (1962). 2 blocks south from here I found Plaza Boyaca. This is an attractive park with lots of trees, nice surroundings and a central statue of Brigadier General Jose Antonio Anzoategui (1789-1819) - a leader in the Battle of Boyaca and born in Barcelona. On one side of the plaza is the Mayors building, on another side is the Cathedral of San Cristobal built in 1748 and due to an earthquake not finished until 1773. On another side is the Anzoategui Museum. There are some quite nice and well kept colonial streets around this area branching off.

In the center of the city is Boulevard 5 de Julio where many 100's of people were walking along the long walkway with shops on both sides, yummy food and cold frappe to drink! At the far southern end of the boulevard is a huge statue that I saw from about 1km away called the Statue of San Celestino - looks like a roman in armour.

I had the next day (Sunday) planned well. Leave early to Caracas (5hrs) and take a further bus in the early afternoon to Colonia Tovar. Unfortunately it didn't turn out as I had planned. From Barcelona I took a local bus 20mins back to Puerto La Cruz and bought a ticket on a bus to Caracas with a company called Expresso Sol y Mar. The bus broke down and we stopped a couple of times, there was no aircon and it was as hot as hell. In the end it took 8hrs to get to Caracas and was too late for buses to Colonia Tovar. I wasn't going to stay in Caracas that's for sure - too dangerous. So I had to pay a taxi a lot of money to drive me the 2hrs to Colonia Tovar - I ended up arriving there at around 8:30pm.


View all photos in the Puerto La Cruz & Barcelona Photoset

Hotel Don Luis, Barcelona, Venezuela (May 2013 - 1 night) - Well-priced budget hotel in the very center of town with 100's of shops all around. The room was simple but had a bathroom and tv.

Park Bench in Plaza Bolivar, Puerto La Cruz, Venezuela (January 2011 - 1 night) - The park bench at Plaza Bolivar was quite fine for getting 4 or 5hrs sleep on after arriving in town late at night, it was the bench closest to the police and they looked after my backpack and things in their tent. It is close to everything in the center of the city. Good price, free.
Venezuela Travel Blog | Photos of Venezuela | Festivals in Venezuela | South America Videos 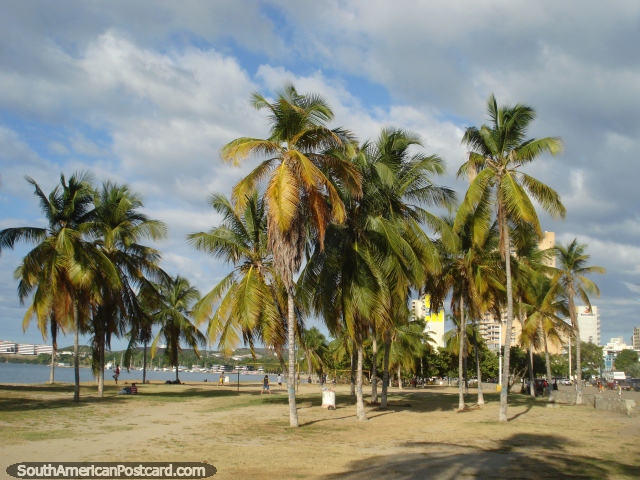