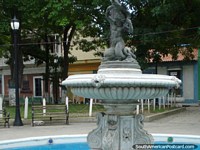 White and bronze fountain in a park in Puerto Cabello. 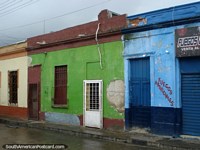 Houses of green, brown, blue and orange in Puerto Cabello. 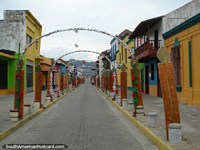 A deserted street on new years morning with Christmas decorations in Puerto Cabello. 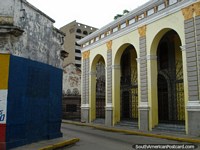 Puerto Cabello is not mentioned at all in the Lonely Planet. I ended up here for a night kind of by accident after not being able to find a bed in nearby Moron on New Years Eve 31/12/2010. I didn't know anything about the place and I think not many people do, but I was surprised on New Years Day while walking around the city how historically authentic it is. It was a bit like a ghost town on this day after the big night of celebrations before. On the surface parts of the city are not terribly attractive but that goes for many of Venezuela's smaller cities.

Statue Park Near the Beach

Near the sea are about 5 monuments all clustered together. This is near the beach where the fishing boats and tourist boats are docked. Monuments are: Jose Marti (1853-1895), a Cuban national hero and an important figure in literature in Latin America and a poet. Next monument was Gabriel Guevara - the first general, another is of Francisco de Miranda (1750-1816), a Venezuelan revolutionary and 3 others in homage to Manuel Gala, Gustaw A. Bergud and Mahatma Gandhi.

Down by the wharf and sea, there is an interesting shaped monument made of steel. A large family was having fun with the kids jumping off the jetty into the water. A park with various monuments including one of Juan Jose Flores (1800-1864), a military general of Venezuela. There is also a tall monument with an eagle at the top. Other monuments here include Joaquin Crespo (1841-1898), twice president of Venezuela and a soldier. There are several other religious type monuments also. Nearby is another park with a big gun that looks like it came off of a ship, it points up towards the church beside the park. The church features a clock tower with dome and has 4 white statues at the top, each statue has a smaller animal or human figure beside it. The clock tower has a clock on all 4 of its faces.

Colorful houses and shops. A green house with red windows, a yellow house with blue windows, a pink house with yellow windows, each with its own street lamp. Other houses had up to 3 or 4 colors, very eye catching indeed! Powerlines weave a tangled mess between them. Garage doors also have bright colors. A yellow church with a red steeple and bell tower catches my eye, it is the Parroquia Ntra. Sra. de la Caridad.

Eyes Do the Walking

A grand monument of Simon Bolivar on his horse caught my eye and then I saw the big stone church with dome and tower. It is a large building with stained glass windows and arched doorways, it is called Iglesia Catedral San Jose Puerto Cabello. Its construction started in 1862. Around this area became quite fascinating to walk around. I am not sure it was completely safe as a walked deeper into the semi-derelict streets. The question I asked myself now was 'is this derelict or is this historical?'. I decided it was a little of both! Amazingly there is an immaculate looking yellow building here which looks like a palace or museum, it has 3 or 4 levels and is quite impressive.

In the center of the markets and shopping area is a plaza with a fountain that has a violin monument in the middle. The plaza has a figure of Augusto Brandt (1892-1942), a Venezuelan composer and violinist, he was born in Puerto Cabello.

A bus took me back to Moron 10 minutes away. Then another bus to Maracay and another to a popular coastal spot called Puerto Colombia. From Puerto Cabello via Maracay to Puerto Colombia takes 4hrs or less if it is not New Years Day.


View all photos in the Puerto Cabello Photoset 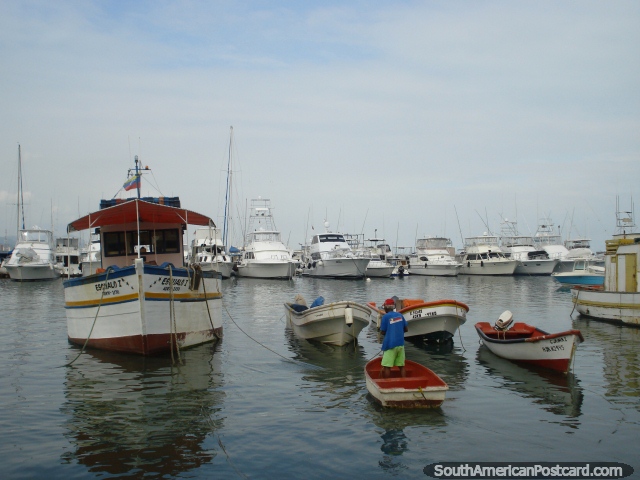