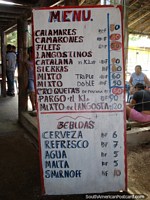 A fishy menu at one of the restaurants at La Restinga lagoon, Isla Margarita. 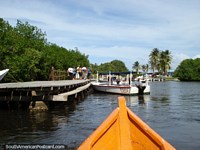 A beautiful day at La Restinga as I arrive back after the day exploring Isla Margarita. 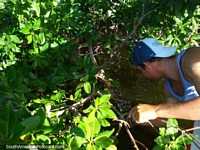 Taking oysters from the La Restinga lagoon is for locals only, Isla Margarita. 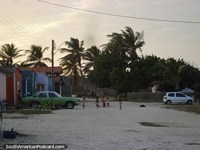 From the bus terminal 5 blocks from Plaza Bolivar in Porlamar I took a bus westward to La Restinga about 33kms away. I had been invited to visit by a sweet lady friend I had met the day before while I was walking around Porlamar. I didn't know it then but I would end up staying for 2 weeks living in a house on the beach with a family of fishermen. I was lucky, they gave me free accommodation and food, mainly fish.

Where is La Restinga?

La Restinga is in the middle of Isla Margarita in the area where it thins out and the 2 islands are joined by a bridge. The beach and locals of La Restinga National Park are separated from the mainland by a large lagoon. Boats bring people back and forth. It didn't take too long to get there in the bus, about 35 minutes from Porlamar.

It is a beautiful lagoon, there are many little fishing boats that take people across to the beach, usually at a cost. I told them I was coming to visit a friend and mentioned her name and I got across free. The boat ride takes less than 10 minutes before arriving at the wooden jetty where trees overhang the water creating a tunnel and palm trees stand in the distance.

Behind the sand and beach there are 3 outside restaurants serving fresh seafood. They bring around the various catches of the day and you pick the one of your choice and they cook it up for you - crayfish, squid, shrimp, prawns, oysters and fillets. The beach is long with white sand and has regular strong waves - good to play in close to the shore. The locals are very friendly and live in the houses along the beachfront.

Staying With a Fishing Family

I was taken to the house where I would stay for the next 2 weeks. I had my own basic room complete with mosquitos and leaky roof. The family were very nice and hospitable, they worked hard during the day fishing and cooking in the restaurant. I was quickly introduced to many people and relatives in the village. La Restinga is a popular place to spend a day at the beach, take a tour of the lagoon and eat fresh seafood. Each day boat loads of visitors came to do just that, many are from Brazil and of course there are Venezuelans too.

The family took me out fishing one day around the lagoon, first we collected oysters from the roots of the trees that grow in and above the water to be used as bait. The bucket began to fill with fish very quickly, pelicans flew in to sit and watch in the trees overhead. Most days for lunch and dinner we ate fish and arepas although one night we ate a fresh duck from the backyard and another I believe it was goat.

When the tourists have left for the day the locals enjoy playing dominoes, snooker and basketball or soccer on the outdoor court. Many children live here. There is a school for the younger ones at La Restinga while the older kids cross the lagoon each day to get to theirs. It is a slow paced and slightly isolated life here, the boats across the lagoon run only during the day until dark. It is impossible to go out at night to another part of the island. I spent many days just relaxing, swimming, eating, playing guitar and surfing the internet with the little Movistar modem stick that connects to the cellphone tower that I bought in Porlamar, but the signal was very weak at La Restinga.

Day Trips Around the Island

On other days I went on day trips to different parts of the island. I visited Boca de Rio nearby a few times and I bused all the way to the western side of the island to the Peninsula de Macanao. Another day I visited Pampatar to see the castle and on another La Asuncion, Santa Ana and Juan Griego.


View all photos in the La Restinga, Isla Margarita Photoset 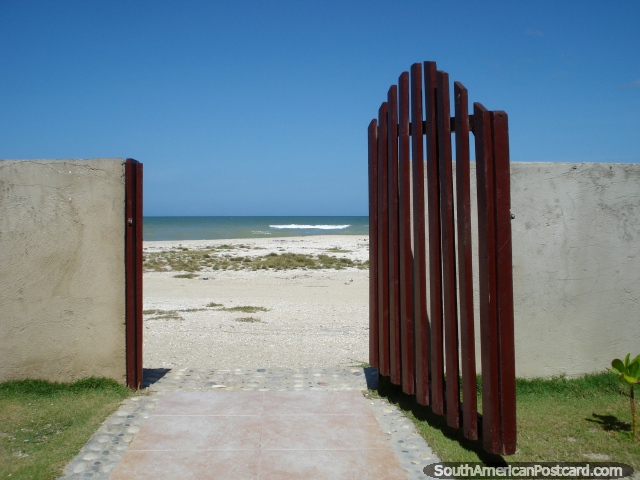