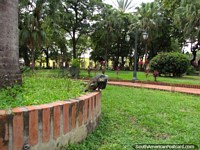 Large iguana sits in the middle of Plaza Bolivar in Barinas. 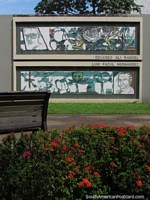 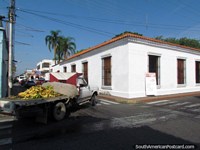 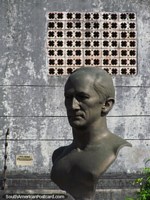 Located in the foothills of the Andes 188 meters above sea level, Barinas is the gateway from the east up into the heart of the mountains and small towns located 3500-4000 meters up towards the west. I had made my way from the coast through Barquisimeto and Acarigua over a few days to get here. It's 2hrs south / west from Acarigua where I had been the night before. I was hoping that Barinas would be an interesting city to explore in itself and I was to find out that it actually is! The central historical area is pretty cool and the city has a few good parks also. I knew Barinas would be a good place for Chavez murals and street art too since this is the state he was born in. I stayed in a budget hotel just a couple of blocks from Plaza Bolivar, it was actually not a very safe part of town especially on a Sunday when most Venezuelans stay indoors.

Tour Around the City

I walked to Plaza Bolivar to begin. On one side is the green palace 'El Palacio del Marques del Pumar', quite a prestigious looking building. Another side has a bridge crossing over flower gardens and water to the 'Casa de la Cultura' (Cultural House). The cathedral 'Catedral Nuestra Senora del Pilar' is on the corner nearby and is very attractive, like a fairytale church.

As my instincts often lead me down sidestreets and into odd neighborhoods, I did follow these instincts a little at times. At least until a man with his daughter came up to me and told me to be very careful and not walk along certain streets around where I was. The murals lead me there I'm telling you!

Back to Plaza Bolivar where a large iguana had appeared beside a tree. Right next to Plaza Bolivar is Plaza Dr. Luis Razzetti (Poets Square) where there are a group of about 7 very large art murals paying homage to famous Venezuelan poets including Alberto Arvelo Torrealba, Humberto Febres and Rafael Angel Insausti.

On a nearby corner opposite Plaza Razzetti is Plaza O'Leary, a very dodgy looking place but it really grabbed my attention for its murals, colors and character. A group of youth who were playing basketball posed for a photo on the court. This place is full of quirky graffiti art and stuff to photograph but definitely not a place to take a night time stroll. A gold bust of Irish military general Daniel Florence O'Leary (1802-1854) stands across the road along with murals of various men including Che Guevara and Simon Bolivar.

After a hotdog at a stand outside a tall marble-faced church I took a bus to Federation Park (Parque la Federacion). This is a park full of fun (mainly for kids). It has a few animals, a lagoon, a flying fox, a train ride and lots of yummy food. Sunday was a good day to be here with many locals enjoying the day relaxing on the grass lawns. The park has at least 15 species of large shady trees. Animals include monkeys, peacocks, ducks and other birds.

I had seen from the bus on the way there some amazing murals not far from the park. I took a quick walk back to find them. This mural is a commissioned work located outside the 'Museum of the Llano Culture' (Museo de las Culturas del Llano). It consists of 25 identical images of President Hugo Chavez as a young man but all have a unique color combination. It's fantastic and stands out a mile from everything around it!

Early the next morning I set out to finish exploring around the center of Barinas. Being a Monday, this time there were plenty of people walking around and the place felt a lot safer. In fact the night before I had run 2 blocks down the middle of a road without streetlights to get some fast food after the hotel had warned me not to go outside because it was too dangerous. They said I could order in pizza but I didn't want pizza. Maybe that was a stupid thing to do, but anyway it was Monday morning and the place felt a lot safer!

I headed firstly to Plaza Zamora which has a bust of Venezuelan soldier Ezequiel Zamora (1817-1860) in the middle. More interesting though was the street art I found across the road on a semi-derelict building. I then headed towards another part of the central city passing the museum 'Museo Alberto Arvelo Torrealba' named after a poet born in Barinas (1905-1971).

Next I found Plaza El Estudiante with its gold bust of independence leader Jose Felix Ribas (1775-1815). Outside the public library there is a bust of poet and politician Andres Eloy Blanco (1896-1955), the building is nothing to speak of however. I now came across a great set of murals in the courtyard of a school named after a heroine of independence Josefa Carmejo (1791-1862).

Head for the Hills

I picked up my backpack from the hotel and made my way to the bus terminal by taxi for a bus / shared taxi combo up into the mountains to Apartaderos (3hrs) and Mucuchies (30mins more). I enjoyed Barinas a lot!


View all photos in the Barinas Photoset

Hotel Residencias El Marques, Barinas, Venezuela (August 2014 - 1 night) - Not a bad place but in a location that is dangerous at night. It's just 2 blocks from the main plaza. Had aircon, a fridge and tv but no wifi. A very good price, about $5USD per night on the black market. I really can't complain, it was perfectly fine.
Venezuela Travel Blog | Photos of Venezuela | Festivals in Venezuela | South America Videos 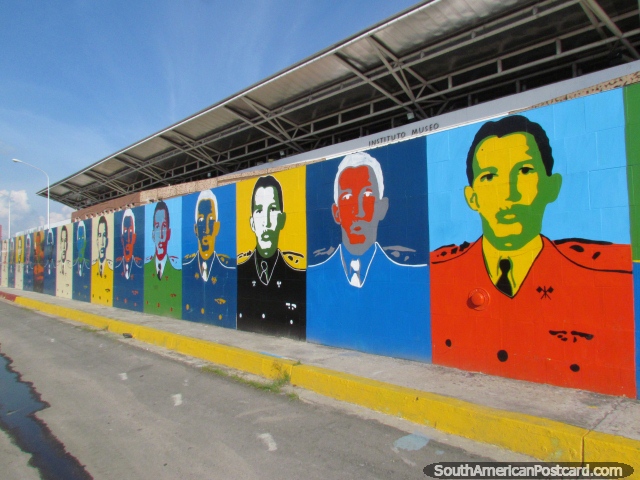