A 10hr bus journey during the day from Ciudad Guayana brought me to Santa Elena de Uairen in the south-east of Venezuela near the border of Brazil. I stayed the night, looked around town in the morning and then made my way to the border at Pacaraima on the Brazilian side.

There is plenty of accommodation in Santa Elena and it is quite cheap compared to Venezuela's normal prices for casual accommodation in other parts of the country. There are also many tour companies offering tours to places like trekking in Roraima, the Gran Sabana, a trek in Chirikayen, Angel Falls, Canaima Park, Aponwao, El Pauji and Los Roques.

There are many shops selling imported goods along the main streets of Santa Elena, traveling gear, electronics, household items and sports equipment.

I made a visit to Plaza Bolivar as usual. The monument of Simon Bolivar has a plaque that says that he was the liberator of Venezuela, Colombia, Ecuador, Peru and Panama and that he founded Bolivia. Another plaque says that Santa Elena was founded on the 12th of March 1923, it's a nice little park with trees and benches to sit on. I saw a sign pointing up the road to the church Iglesia Santa Elena. I walked for 5-6 minutes and came to the big stone structure with bell tower and many stone archways, the church has at least 8 white religious figures standing on the roof facing towards the road.

It was time now to collect my backpack from my room and take a co-op taxi to the border control 15 minutes away which included a couple of road checkpoints during the trip. After Venezuelan passport procedures I walked a few hundred meters up the road to the Brazilian control. The borderline has flags and monuments next to each other, on the Venezuelan side it is Simon Bolivar and on Brazil's side it is D. Pedro I. After the formalities it was just a short walk to the co-op taxi stand in Pacaraima where I headed south to Boa Vista. I was in Brazil again!


View all photos in the Santa Elena / Brazil Border Photoset

Posada Hotel Michelle, Santa Elena, Venezuela (January 2011 - 1 night) - Being a border town and place many travellers pass through to or from Brazil, Santa Elena has good competion in places to stay, therefore good prices. My room was excellent and large with tv and bathroom. Tours can be booked from the foyer. In the center of Santa Elena.
Venezuela Travel Blog | Photos of Venezuela | Festivals in Venezuela | South America Videos 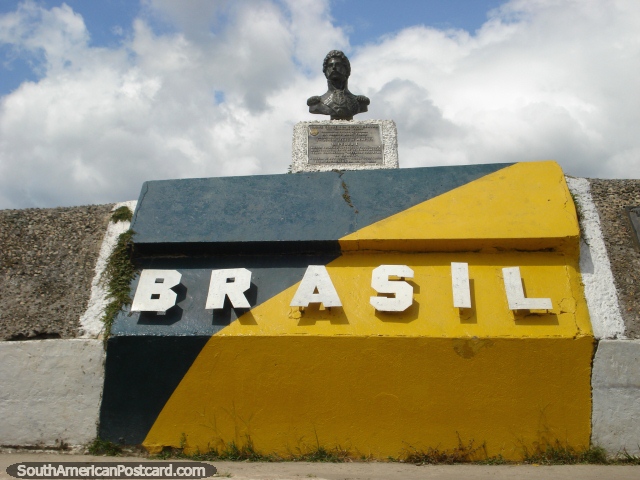