Maracaibo, Venezuela - There Is More Than Meets The Eye 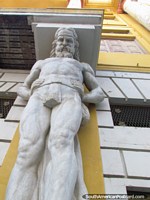 Statue on a building side looks down at Plaza Baralt, Maracaibo. 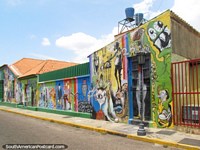 A street of fantastic murals and color in Maracaibo. 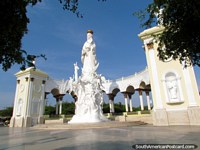 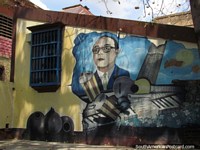 Plaza San Juan in Maracaibo mural, he must have been a musician.
Map location: Maracaibo, Venezuela

A week or so after the 2013 elections in Venezuela I returned for my 2nd time in the country. It was much cheaper than my first time here 2 and a half years earlier, black market exchange rates had skyrocketed. I arrived in Maracaibo this time from northern Colombia. Santa Marta to Riohacha 3hrs, 1hr more to Maicao, 12kms more to the border and 3hrs more from there to Maracaibo. I had done some research before arriving and knew there were things to do and see in the city. I was mainly interested in having a good look around the historical neighbourhoods and to see some of the sights. A friend had told me there was nothing to see in Maracaibo. I couldn't and didn't believe him and yes he was wrong!

From my cheap hotel near the bus terminal I walked through a market area to the nearby Plaza del Rosario de Nuestra Senora de La Chiquinquira, it's a huge rectangle plaza that covers several blocks. Things to see include the eye-catching church Basilica de La Chiquinquira with 2 statues built into it of bishops Marcos Sergio Godoy and Arturo Celestino Alvarez. In this part of the plaza are busts of Graciela Rincon Calcano (1904-1987) - poet and storyteller, Ricardo Aguirre (1939-1969) - singer and musician and Antonio Maria Soto (1901-1976) - religious society founder. The plaza continues across the road with a long waterway feature leading up to a huge white monument in the distance - Monumento de la Virgen de la Chinita. This is a nice clean park with fountains, flowers, gardens, trees and seating. The Chinita monument is huge, quite spectacular, on the other side of it is another white monument to San Sebastian - the poor man tied to a tree with a few arrows sticking out of him.

Across the road from here is the blue church Parroquia de Santa Barbara with white trimmings and quite attractive. I walked through an area called Paseo Ciencias towards Plaza Bolivar, there are several important buildings around. The Baralt Theater, the Cathedral, the Legislative Palace, the Government Palace and the House of Capitulation. East from here I continued to explore. I found Plaza Antonio Jose de Sucre, nothing special - some murals and shady trees. Up the road a little near the hospital is church Capilla Santa Ana with a bust of Dr. Francisco E. Bustamante outside. Beside is Plaza Francisco de Miranda, there's a statue and some quite nice murals.

Next I wanted to have a look around Carabobo Street just 2 blocks north, this is a colorful area of old houses and amazing wall murals. I had a few minutes rest in Plaza San Juan. I enjoyed taking photos of the houses and met some friendly locals - a family and 3 businessmen who asked if I would take a picture of them.

From Carabobo Street I ventured across Street 93 to park Parque Urdaneta, this is probably slightly out of the reasonable safety of the central areas. This park is big but was quite empty. I'm sure if there was some more activity it would be great. There's a statue of Rafael Urdaneta (1788-1845), a war hero and a monument depicting a battle scene with men on horses. I was quite interested in the wall murals nearby, political statements. North from here I came to the Urdaneta Museum. It wasn't open but has a great garden with monuments, gardens and cannon. In nearby streets I found a small park named after Dr. Adolfo d'Empaire (1873-1947), church Iglesia Santa Teresita, Plaza Juan Crisostomo Falcon and Plaza Libertad.

By now I had strolled into the heart of the Santa Lucia neighbourhood. I was enjoying myself but I would not suggest this is a good idea unless you take good precautions, care and keep your eyes open. When I was having a cold drink and break beside church Iglesia Santa Lucia, a group of local boys started chatting to me. It wasn't a problem. I like to chat, but I make sure I am aware of everyone etc. Next thing I know 4 policemen with guns drawn race around the corner and up to us. Nobody freaked out, I didn't. I guess they thought I was getting robbed. I moved on quickly and continued my walk through the neighbourhood seeing streets with cool houses, wall graffiti and street art. I ended up day 1 on Boulevard Santa Lucia, a nice park with an angel fountain. I visited Plaza Ana Maria Campos, Plaza Guanipa Matos, Plaza Colon and Plaza Baralt.

On day 2, early in the morning I asked a taxi to take me somewhere interesting and nice. He said I needed to see Vereda del Lago, a big park beside the lake. He dropped me off there. But I didn't like this place, there was nothing to see, only people exercising and the lake. I think I had seen everything I had come to Maracaibo to see this time.

Maracaibo has a lot to see, you just have to get out on foot and explore the city. Of course you must be careful at all times. I headed back to my hotel across the road from the terminal and left town by 10am by bus 3hrs eastward to Carora.


View all photos in the Maracaibo Photoset

Hotel Ula Ula, Maracaibo, Venezuela (August 2014 - 1 night) - Wow, the biggest bed I have ever slept in at a hotel. The room was nice, had a tv, a fridge, an aircon that I could turn on or off and a large bathroom. I payed a special low price for having the room from only 5pm until 8am the next morning. This hotel is one of the better choices from the group of hotels in a row opposite the Maracaibo bus terminal. Recommended.

Hotel Rivera del Lago, Maracaibo, Venezuela (April 2013 - 2 nights, August 2014 - 3 nights) - This hotel near the Maracaibo bus terminal robbed me. When I payed for my 2nd night (230 Bolivares), I gave them 300, they had no change and said come back later. When I came back a while later the woman couldn't remember that she owed me 70 Bolivares and refused to give it to me. I put up a stink about it and got nowhere. Don't stay here unless you want to be robbed! Just over a year later when I was back in Maracaibo I stayed here again because the other hotels on this street are just plain horrible. The prices compared to the year before had increased by quadruple depending on the room. This hotel has a number of problems that I had to put up with though. Firstly, they tell you that there is wifi, then they put you in a room on the 2nd floor where it does not work. Secondly, none of the remote controls for the tv worked, I had to change remotes 3 times. Then there is the bed sheet that is not big enough for the bed and keeps popping off the corners, so that you end up sleeping directly on the mattress, yuk. Every room has an air conditioner without a control, the temperature in my room was set to 21 degrees and goes all day and all night. It was a cold day outside and I asked them to turn the temperature up beacuse the room was like a fridge but they couldn't because they didn't have a control, oh dear! The light in my room died so I went straight down to reception to tell them so they could replace it, the woman said they would do it but nobody ever came to do so.

Solicito Empleada, Maracaibo, Venezuela (May 2013 - 1 night) - One of the most disgusting places I have ever stayed in! It's across the road from the bus terminal. Cockroaches climbing the walls, the shower didn't work, neither did the toilet. Horrible bed. The woman owner didn't care. Over-priced. Avoid at all costs.
Venezuela Travel Blog | Photos of Venezuela | Festivals in Venezuela | South America Videos 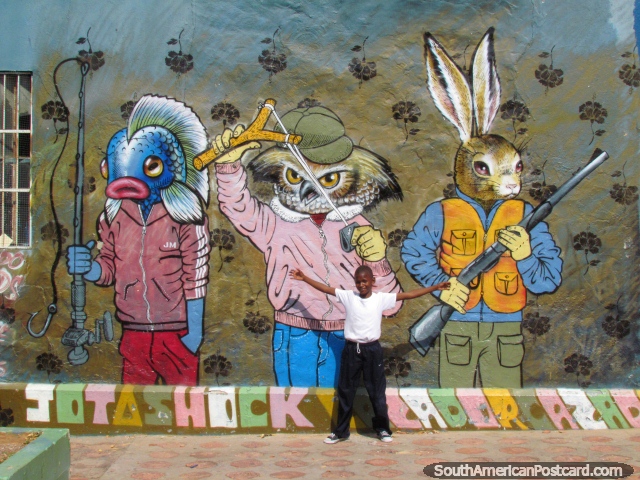