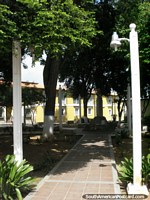 Shady park behind the beach in Pampatar, Isla Margarita. 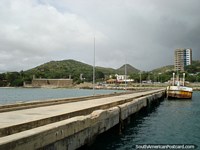 From the end of the wharf looking towards the castle and hills in Pampatar, Isla Margarita. 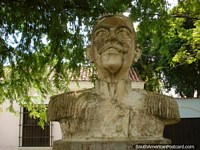 Monument to General Jose Maria Garcia Gomez (1841-1917) in the park near the castle in Pampatar, Isla Margarita. 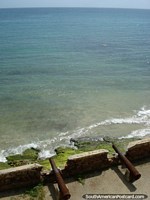 I set out for a day trip from La Restinga to Pampatar to see the castle. I had to go via Porlamar. The bus from Porlamar only took about 20 minutes and leaves up the road from Plaza Bolivar in the direction of the church. Pampatar is located on the far east side of Margarita Island beside the sea, the main attraction being the castle Castillo San Carlos de Borromeo.

Castillo San Carlos de Borromeo was constructed in 1663 and took 20 years to build. The entrance to the castle is a wooden bridge and then through a door in the rock wall. The castle has 3 levels, 2 above ground from the road and one below where there are many cannon in a row pointing towards the ocean. On the ground level an impressive stone ramp leads up to the top level. An old ship anchor sits in the corner. Bastions sit in each corner of the castles top floor, the views up here are fantastic! You can see the whole bay from left to right - the city, apartment blocks at the back of the beach, the wharf, the hills at the back and boats far out to sea.

Outside the castle directly beside is an open-air amplitheater called Cedeño amplitheater named after Vicente Cedeño (1844-1914), he was a distinguished musician born in Pampatar famous for writing the waltz 'Castro en Margarita', it is a beautiful piece of music. I found a version on YouTube by Hernan Gamboa. There is a monument to Vicente Cedeño overlooking the amplitheater. On the other side of the castle is a nice cooling park with plenty of trees and gardens. There is a bronze fountain with a lion sitting on top and a monument stands nearby to General Jose Maria Garcia Gomez, he was born in Pampatar in 1841 in one of the dungeons and died in Caracas in 1917. Across the road is a childrens playground with many colorful murals painted along the wall. Opposite the castle on the other side of the road is a spacious plaza area with trees and blue lamps, beside it is the white church Santisimo Cristo del Buen Viaje built in the mid 1700's. A couple of cannon sit on small concrete pedestals between the church and Plaza Bolivar - a shaded area of trees and gardens and places to sit. A monument of liberator Simon Bolivar stands in the center. A walkway leads to a fountain with a green frog sitting on the top.

Walk Out the Wharf

It was a beautiful sunny day and I was eager to explore more of Pampatar. I walked down to the wharf near the castle and strolled to the end and took some photos looking back at the castle and beach with its backdrop of palm trees on the other side.

I made my way along the beach where people were enjoying the water or sitting in chairs under shade. Restaurants serve food and drinks from behind the sand. I came back up to the main road from the beach and continued down the road. I found a nice 'n' shady park, it had a monument in the middle to General Santiago Mariño (1788-1854), he was a leader in the Venezuelan War of Independence from 1811-1823. At this point I asked a local where the buses back to Porlamar left from and took the short trip back. I had a great time exploring Pampatar.


View all photos in the Pampatar, Isla Margarita Photoset 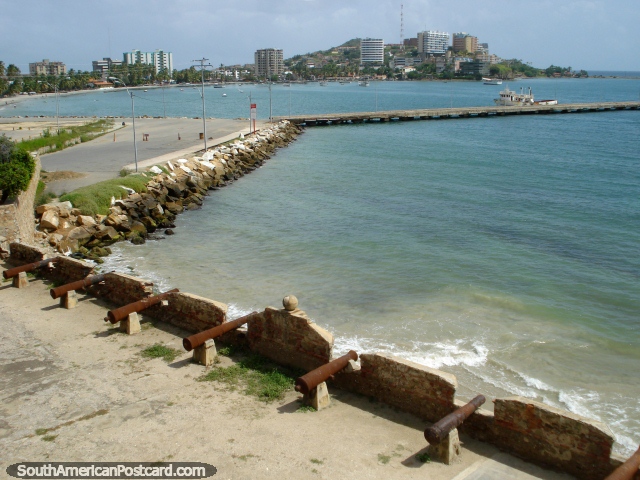