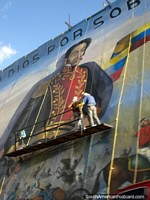 Huge painting on a wall in San Cristobal of hero Simon Bolivar. 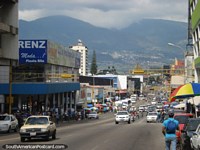 From the center of San Cristobal looking up towards the mountains. 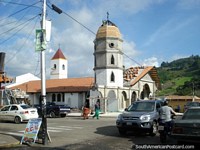 Building a church between San Antonio and San Cristobal. 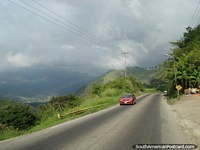 My first time in Venezuela! I crossed at Cucuta in Colombia to the border town of San Antonio in Venezuela on my way to San Cristobal about an hour and a half away. I hired a taxi in Cucuta to take me across the border, to stop at both passport offices and wait while I changed my USD for Bolivares and then to take me to a bus. It was all reasonably straight forward as far as border crossings go.

At the bus stop we waited until all seats were full before we could go. I managed to get the front seat beside the driver and a window. Beside me was a young woman I could practice my Spanish with by means of asking questions about her country. The 90 minute bus ride takes you up into the hills and through small communities and a couple of towns before coming to San Cristobal. I enjoyed the scenery and kept my eyes open for things to see and photograph. I told the girl next to me that I am photo mad, she soon got the idea.

We set off into the green hills, soon I could see San Antonio and Colombia down in the far distance. The views of the valleys are on the right, there are one or two security checks during this first part of the journey. We passed through a little place called Apartaderos, then La Mulera, the views now are on the left, the road is in pretty good shape. I see several places at the road side selling ceramics as well as shops selling fresh meat with pieces of animals hanging there. Shortly we descend into the valley of a colorful town where all the houses are painted in bright colors, this is a place called Independencia. As you come down the hill there is a colorful shop on the right called Arte Sano and more red ceramics. Going from one side of the town to the other took a little time but there are some nice things to see including a pink church on the right, parks, streets and houses of color and statues and monuments. On the left there is an amazing monument of gold, blue and red set in a little plaza. On top of white pillars stand 9 important figures of bronze, it is called Plaza Los Fundadores, there was an earthquake around this area in 1875. 20 minutes later we began to descend into the valley of San Cristobal.

Around Town in San Cristobal

From the bus terminal I took a taxi into the city center to find a place to stay, the taxi fare should cost $20 Bolivares. I found an economical hotel not far from the church, park and markets. The first night in San Cristobal I took it easy, went to a nice restaurant and went through my photos of the day.

Next morning I ventured out. It's not the most attractive of cities I have been in but it does have one of the most amazing churches I have seen called Iglesia San Jose in Carrera 10 and there are more than half a dozen more around the city.

Down the hill a bit is Plaza Simon Bolivar where people sit down and play chess and drink coffee. The streets all around this area have shops and markets.

I wanted to change $100USD cash for Bolivares but there was no money changer that anyone knew of so I asked a shop if they could change it. The lady rang a friend who came in and exchanged it for me at a rate of 7.2, not a bad rate and very helpful to me. Before I came to Venezuela people had said to me that I should bring in lots of $USD in cash because of something to do with the bad exchange rate you get here at ATM machines of 4.3. For $USD cash you usually get a rate of about 7.5 and for a bank transfer to someone you trust with an offshore account you will get a rate of about 7. I was soon to realise that I should have taken this advice a little more seriously when I saw my $700USD in cash dwindling faster than I had expected a week later.

After another night here, in the morning I taxied to the bus terminal beside where the fruit and vegetable markets reside and bought a bus ticket to Merida for $45 Bolivares ($6USD at an exchange rate of 7.5 or over $10USD if you exchange your money at the official bank rate of 4.3 = ouch!). Merida would be my first real destination in Venezuela, a place where there are plenty of things to do and see. The bus from San Cristobal to Merida takes 5-6hrs including a meal stop.


View all photos in the San Antonio to San Cristobal Photoset

Hotel Rossio, San Cristobal, Venezuela (December 2010 - 2 nights) - Comfortable hotel with character in the center of the city near the plaza, church and food, a good price for Venezuela of around $13USD for my own room with bathroom and tv. Friendly staff.
Venezuela Travel Blog | Photos of Venezuela | Festivals in Venezuela | South America Videos 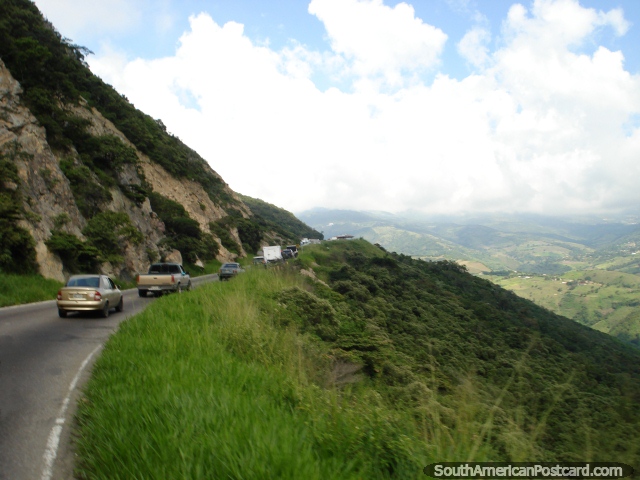