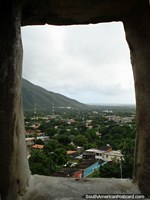 View of La Asuncion through the square fortress window. 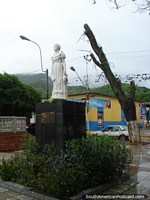 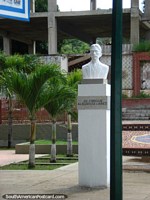 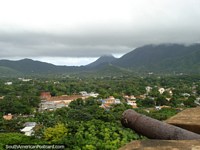 La Asuncion was a place I wanted to visit for a few hours to see some of the historical attractions like the castle and cathedral. I caught a bus in Porlamar down the road from the plaza about 5 blocks past the church, the journey to La Asuncion takes around 25 minutes.

La Asuncion is set in a spectacular valley of green with mountains all around, the best views are from the castle.

Tour of the Town

When I arrived the bus dropped me off outside the arts center Centro de Artes. On the wall outside is a plaque with the face of Omar Carreño moulded into it, an abstract painter and architect, he was born on Margarita in 1927. On the opposite side of the road stands the cathedral Catedral de la Asuncion which was built in the late 16th century. It's an impressive strong stone construction with a clock and bell tower and large wooden arched doorways. Beside the cathedral is Plaza Bolivar which has a few interesting things to see in it like the white sculpture that looks like a large shell and there are a pair of big bells that are a monument called Monumento a las Campanas de los Anos 1664 y 1851. There is a statue of white of a woman named Luisa Caceres de Arismendi (1799-1866), she was a heroine in the War of Independence of Venezuela. The plaza itself is a beautiful and spacious place with walkways, bench seats, night lamps and plenty of trees and of course there is a monument to Simon Bolivar.

From the plaza I started the 10 minute walk up the hill to see the castle Castillo Santa Rosa de la Eminencia which was constructed over many years during the 17th century and completed in 1682. I walked up the hill on the winding road passing a few houses on the way and watching the views open up until I arrived at the entrance where there is a carpark. Brick stairs lead up to the doorway in the stone wall into the castle where a white sculpture of Bolivar greets me. First I wanted to go up to the top deck and see the views and cannon. This was definitely a great place to build a castle fort because the views are far reaching right across the whole valley to the mounatins all around, what a vantage point! There are some big cannon up here, bastions and little rooms. I looked down to the courtyard area on the ground level and walked down the stone ramp. A bunch of cannonballs sit on the ground as well as an old portable cannon with wooden wheels. On the ground level are many little rooms off to the sides, some used for special purposes like for prisoners and some housing things of interest like a black horse, paintings, guns, shields, swords, axes, knives, a crossbow, keys and locks. The castle walls and tiled roof have a nice orange color and the Venezuelan flag flies on a pole on the top floor.

I walked back down the hill to town where I visited the museum Museo Nueva Cadiz, the pink building where there is information about the history of the area. There are gardens with potplants and ceramics, turtles swimming in a pool with a huge replica of Isla Margarita inside, also board displays, maps and a large model ship.

Outside the museum I took a bus next to Juan Griego 15kms away and passing through Tacarigua 5kms and Santa Ana 8kms.


View all photos in the La Asuncion, Isla Margarita Photoset 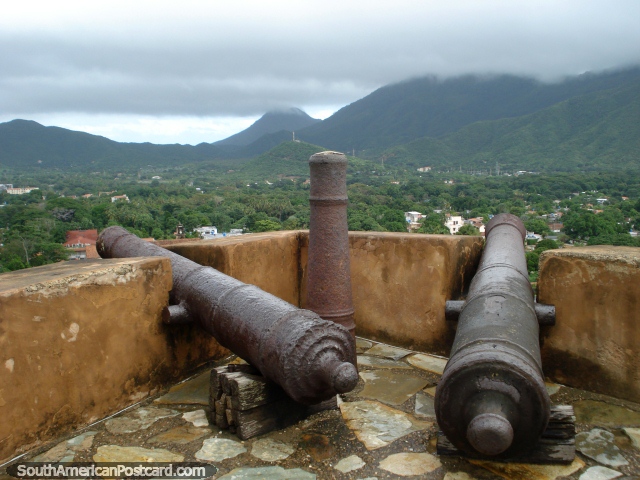