Merida to Maracaibo, Venezuela - I Can See The Oil Pipelines 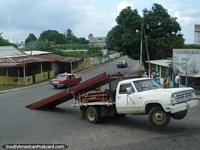 A vehicle overloaded with steel bars tips up on the road. 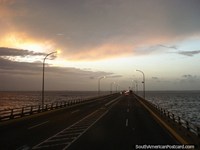 Driving on the bridge over Lake Maracaibo at dusk. 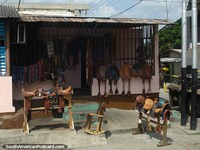 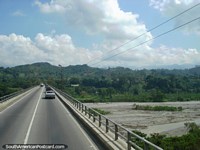 Crossing the bridge over the river north of Merida.
Map location: Merida to Maracaibo, Venezuela

I left Merida after 2 weeks there and took a bus during the day north to Maracaibo, this journey took 9hrs. The scenery isn't the most mind-blowing that Venezuela has to offer but it is pleasant enough and has long straight roads and open spaces.

After leaving Merida the bus headed in the direction of Tovar and El Vigia. The mountains and river gauge are nice to see, there is lots of cactus around. A billboard depicting Simon Bolivar and Hugo Chavez claimed that it was now 200yrs since Venezuelas 1st independence and that they were now having their 2nd independence. After nearly an hour on the road we came to some big mountains that had a great series of tunnels going straight through them. The first tunnel was Tunel Estanques and is 1485 meters long. The next tunnel was Tunel Cana Brava and is 537 meters long and the next tunnel was Tunel Santa Teresa and is 2650 meters. We came out to be alongside on the right of the river gorge and then over a bridge, the scenery is beautiful and green. A little while later there is a town and stalls beside the road selling meat, fresh fish and fruits such as strawberries, watermelons and peaches. We came to a place called Mucujepe where there is a little park with a red and yellow monument in the middle. There is a yellow church with multicolored windows. 10 minutes later we come to Obispo Ramos de Lora, a small place with a few shops and red and orange flowers. 15 minutes later we come to a larger town or possibly an extension of the previous town, there is a shop selling horseriding equipment. There is a white church in the distance as we pass around the fountain-traffic island, the streets are busy with markets and colored umbrellas. There is a monument of a green and red virgen Santa Elena. We passed through the toll gate, over rivers and past various things on the roadside like fruit and meat stands. The land here has farms and animals around. Then we came to the town of Tucani, a busy little place where the park had decorations and props for the children for Christmas all set up.

Tucani is about 10kms south of the bottom of Lake Maracaibo. We now headed in the direction of Santa Apolonia, Palmarito and Nueva Bolivia. La Pueblita is 5kms, Santa Apolonia is 16kms and there is the Aguas Termales 14kms away. After this, a short while later we stopped for lunch for about 30 minutes. It is around this point that the road divides, left to Maracaibo or right to Barquisimeto. We come to Estado Zulia and some toll gates. 20 minutes later we are in Mene Grande, this is farming country for the next hour. Now I start to see the oil pipeline along the roadside as we head towards Ciudad Ojeda. Cabimas 3kms, Santa Rita 23kms and Maracaibo 40kms.

There is Oil Beneath the Lake

20 minutes later we are on the Maracaibo bridge going across the great Lake Maracaibo, there is much oil beneath the lake. This is the last part of the 9hr journey as we arrive in Maracaibo at the bus terminal after taking 10 minutes to cross the bridge.

There are a bunch of cheap hotels behind the bus terminal and I found a bed at one of these for the night. My plan for the next morning was to continue on to the city of Coro.


View all photos in the Merida to Maracaibo Photoset


My Hostel & Hotel Reviews for Merida to Maracaibo, Venezuela:

Hotel Caroni, Maracaibo, Venezuela (December 2010 - 1 night) - A cheap dive across the road from the Maracaibo bus terminal. Not great or very clean, just a place to crash for a few hours. The best price I could get out of several dingy hotels all next to each other behind the terminal.
Venezuela Travel Blog | Photos of Venezuela | Festivals in Venezuela | South America Videos 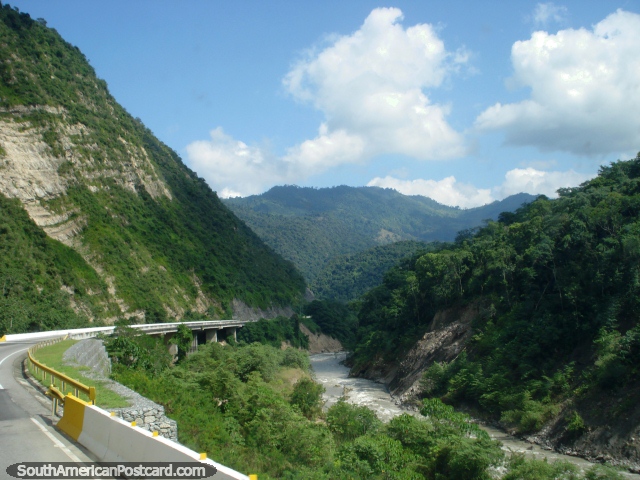