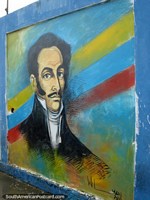 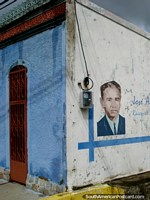 Important person painting on wall a few minutes before Santa Ana on the way to Juan Griego, Isla Margarita. 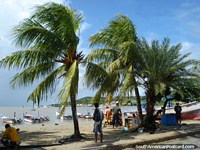 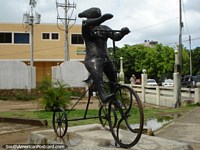 From La Asuncion I took a bus to Juan Griego only 15kms away on the north west coast of Margarita Island passing through Santa Ana 8kms away. Juan Griego is known as a laidback place where there is accommodation available. The bay has fishing boats, visiting yachts and tour boats docked. There can be some very spectacular sunsets here also. On the way to Juan Griego the bus passed through Santa Ana. I didn't walk around, but a few things caught my eye like the paintings of important people along the walls leading into town.

I arrived in Juan Griego, it was not the greatest of sunny days, a little rainy now and again. First thing I did was eat a hotdog for lunch in a nice little park. There is a monument to Dr. Francisco Antonio Risquez who was born in Juan Griego in 1856 while across the road I saw an interesting metal sculpture of a figure riding a 3 wheeled bicycle. I walked down the road towards the sea, the main streets have many shops. I came to the big park along the seafront behind the beach. The park is a large one with shady trees, benches to sit on and lamps. Like in Plaza Bolivar in La Asuncion there is a monument here to the heroine Luisa Caceres de Arismendi. A short way away is a statue of a man with a sword and a pair of binoculars, he is Juan Bautista Arismendi (1775-1841), a general in the War of Independence and was born on Isla Margarita. On a plaque near the wharf in the park it says that on this very beach on the 3rd of May 1816 Simon Bolivar disembarked his ship and goes on to say 'Homenaje del Refugi Pau Casals al Padre de la Patria'. I walked to the end of the wharf where there were a few boats docked that are used for taking people fishing and sightseeing. A block back from the beach I found the white gothic church Iglesia San Juan Evangelista which is a national historical monument. It was created in 1844 and built in 1850 and has dual towers. One has clocks on all four sides, it stands out dramatically from its surroundings. I continued along the waterfront past a woman making arepas to a nice park with pathways, bench seats, hedges and white lamps. In the middle stands a monument to a military officer who fought in the War of Independence, a man called Almirante Luis Brion (1782-1821).

Down at the Beach

I was now down on the beach, a cannon on a stone base sits in position over the sand pointing to sea ready for any pirate ships that may arrive. In the distance up on the hill I could see the Fort Galera overlooking the bay, but I didn't visit. I had seen the forts in La Asuncion and Pampatar already. Along the main road behind the beach where there are many shops selling clothing I came now to the fishing village end of the beach where all the pelicans hang out in groups on the boats, on the sand and beside fishing sheds. I visited one of these sheds, the man was proud to pose for a photo while holding a long snake-like fish. I am not sure what type of fish they were but they had razor sharp teeth. Behind the shed a bunch of pelicans fought over some fish scraps.

Around about now I decided to walk towards the bus terminal to get back to Porlamar and then back to La Restinga where I was staying. Along the way just past a wall covered in colorful murals of Simon Bolivar and other important men I came to the Municipal Market, a place to buy vegetables and all kinds of stuff. When I got to the terminal I briefly thought about going north to see some of the beaches but no buses go up there, I had to take a taxi. I asked a taxi driver about it and decided it would be better to share the cost with a couple other people on my next visit to Isla Margarita. And yes there will be another visit. I took the bus back to Porlamar, about 25kms away.


View all photos in the Juan Griego, Isla Margarita Photoset 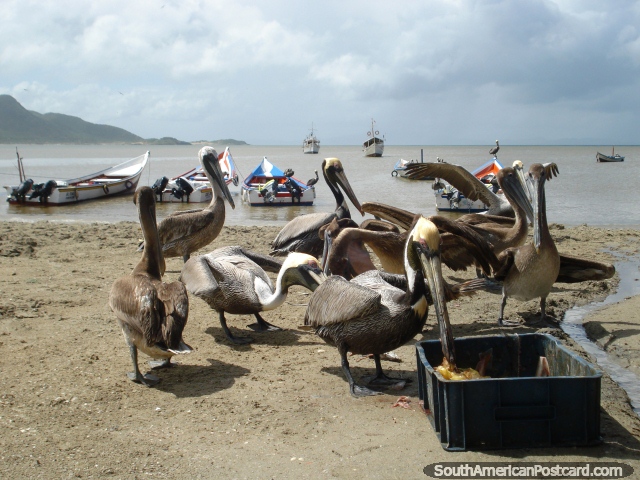