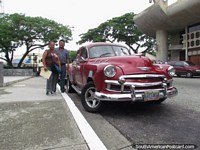 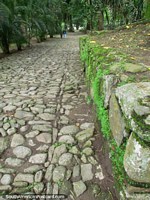 Walking the cobblestone paths of the old city of San Felipe. 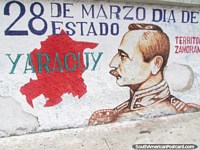 Yaracuy artwork mural near the bus terminal in San Felipe. 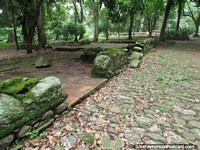 The town of San Felipe sits halfway between Moron on the coast and Barquisimeto city. I spent the night in Moron and took a bus for an hour and a quarter and arrived in San Felipe by around 9am. I didn't know a lot about the city before arriving, only that it had some ruins of the original city destroyed in an 1812 earthquake - Park Museum 'El Fuerte'.

After enjoying a couple of empanadas for breakfast (so much better than Colombian empanadas), I headed in the direction of Plaza Bolivar. San Felipe's most important buildings surround the plaza where a Simon Bolivar upon his horse monument takes center stage. On one side of the plaza is the cathedral which is not particularly attractive from the outside at least - basically just big slabs of concrete in different shapes. There is also the Government Palace and the Legislative Palace. That was all fine but I was not jumping up and down with excitement to be honest, there had to be more to this place than just that. Just a few blocks down the road from here is the park, full name - Parque Historico Arqueologico San Felipe El Fuerte. This is what I really had come to see.

I was greeted at the white entrance archway by some young locals who gave me a map and information about the place. I was glad I still had some insect repellent left over from Angel Falls, the mosquitoes here are vicious, but it's worth it. To see at the park includes - the church Nuestra Senora, the Saman tree, bamboo, the town hall (ayuntamiento), Capuchinos convent, the peoples houses, the bridge of the washerwomen (lavanderas), the water tank (aljibe), the cemetery, cobblestone streets, Aguila plaza, stone walls and more. It's an amazing place with the ruins surrounded and amongst mature trees and healthy forest floors. I spent nearly an hour here enjoying the sights and the smell of fresh natural air.

I visited Plaza Junin, it has a checkered ground pattern and a bust in the middle of Jose Joaquin Veroes - a war hero (1789-1855). Another plaza I found was Plaza Teofilo Dominguez named after I believe a musician. I made my way towards the bus terminal in a little minivan but got out when I saw Plaza Sucre on the left-hand side - I'm a real sucker for plazas and statues. This was actually the nicest plaza I had seen so far in San Felipe - big, open and attractive. The monument is of 2 men standing together - Generals Simon Bolivar and Antonio Jose de Sucre. Across the road is a statue of a man with a cannon on wheels and church Iglesia San Rafael Arcangel.

Across the road from the bus terminal is the Indio Yaracuy monument depicting a warrior and saber-toothed tiger. He was the son of the chief Chilua - the commander of 500 indigenous populations!

It was time to leave San Felipe, it took 1hr 20mins to reach Barquisimeto where I had a good lunch beside the terminal and gave my smelly shoes and socks to a homeless man - he seemed quite happy about that. I took a bus back to Maracaibo (6hrs) and returned to Colombia the following day.

I have to say that I did get a local with a bad attitude towards gringos give me a few words on the bus between Moron and San Felipe and a couple more guys at the San Felipe bus terminal who didn't like the tourist with a camera either. A shame, but that was the only time I felt unwelcome on my travels in Venezuela.


View all photos in the San Felipe Photoset 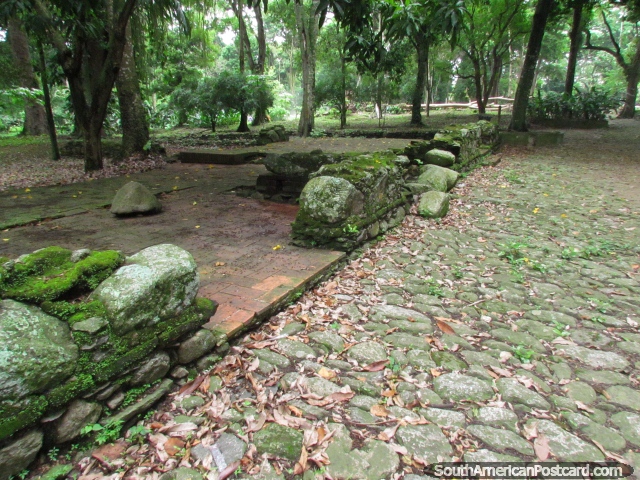