Macapa, Brazil - The Must See Attraction Is The Fortress

Boy rides a bike on a ramp into the Amazon River in Macapa.

Outside the fort in Macapa - Fortaleza de Sao Jose.

Located in the northern Amazon, Macapa is known as 'the capital of the middle of the world' because the city sits right on the equator. However, apart from the great fortress in the city center beside the Amazon River, it is not much of a capital, it's a shabby place, the equator monument and gardens are not even attractive. If you want to see the equator in a nice setting, visit Mitad del Mundo in Ecuador! I arrived in Macapa by ferry, 26hrs from Belem. The reason being that I was traveling north to the 3 Guianas afterwards.

I Must See the Fort

After finding a hotel near the fort, that's exactly where I went, it's called Fortaleza de Sao Jose de Macapa and is a great sight and definitely worth a visit! After construction the fortress opened for action in 1782 but was never used in any combat. The fort is in perfect condition - the walls, buildings, church, bastions, tiled roofs, brick ramps, paths and green lawns. There are many cannon around the edge walls also. As good as the fort itself are the views of the bay and river from up there. That's a reason in itself to come see the fortress! It's open from Tuesday to Sunday from 8am - 6pm. From here I walked down to the waterfront where people sell food like hot fries etc. There are restaurants and bars also. The long wharf you can walk out to the end of and sit down, it's called the Trapiche Eliezer Levy, it's 386m long and was built in 1945. There's a statue of a woman sticking out of the water near the end of it. I had some food and headed back to the hotel.

Next morning by taxi I headed to Marco Zero, the equator. There is nothing there to see apart from a tall dull monument. The idea is to stand on the line that separates the northern and southern hemispheres and have your photo taken. I managed to balance a coin, some people do it with eggs, that's pretty cool. Apparently the adjacent football stadium uses the equators line as the center line of the soccer pitch! I wonder if that gives each team an advantage for half of each match? Macapa also has a bunch of museums, one is at the equator center but I didn't visit.

From here the taxi took me to the terminal where cars leave from to take people north to Oiapoque on the border of French Guiana. It's an 8-9hr journey.


View all photos in the Macapa Photoset

Hotel America Novo Mundo, Macapa, Brazil (April 2015 - 1 night) - Hotel America has cheap basic rooms and more expensive flashier rooms to choose from. I decided to get a flashier room with air-con, fridge, tv and private bathroom. This room was also close enough to the office so the wifi worked for me also. Located just 5mins walk from the fort and waterfront area where there are restaurants and bars too. The man at the desk was very helpful to me when I asked him a bunch of questions about travel related stuff. Breakfast was on the house in the morning which is typical of many hotels in Brazil, I like that! I payed $90 Reals for my room (just under $30USD). Recommended.
Brazil Travel Blog | Photos of Brazil | Festivals in Brazil | South America Videos 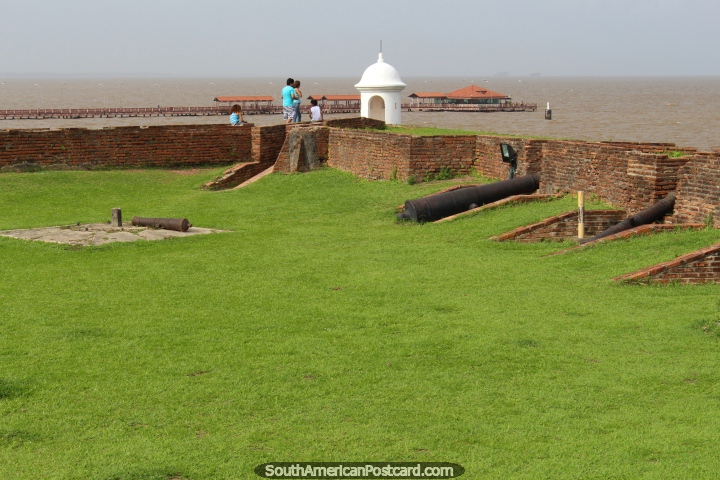